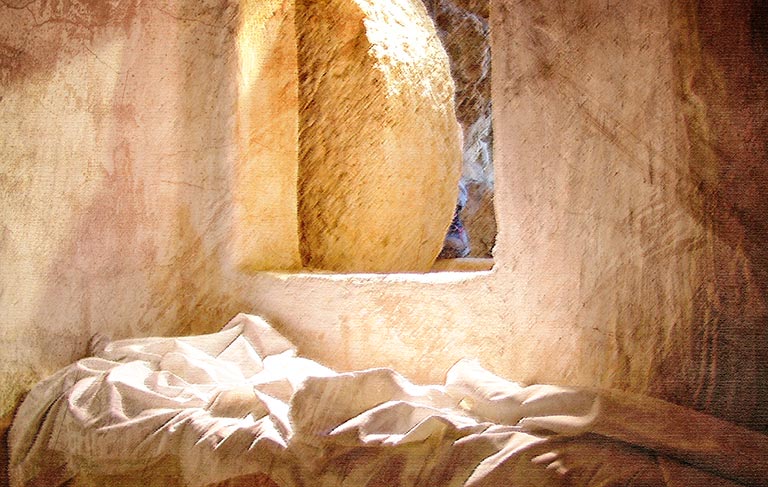 Last time Jesus body was laid in the tomb by Joseph of Arimathea, the stone was rolled against the entrance, and the two Marys “saw where he was laid” (Mark 15:46-47). It is now Sunday morning. The sabbath is over and the three women (cf. Mark 15:40) can now go to the tomb and anoint the body (Mark 16:1-2). It is very early! The sun has just risen, not yet full daylight (Cole, TNTC).

The fact that these women are presented as the first eyewitnesses to the resurrection only attests to the veracity of the narrative. For the church would never have manufactured a story where the key eyewitnesses were considered so unreliable (based on their gender) that their testimony could not even be accepted in a Jewish court (Garland, NIVAC). Note also similarly the unpreparedness of the women:

Who will role away the stone for us from the entrance to the tomb?

These women were with Jesus on the way to Jerusalem, and heard His repeated predictions of His resurrection and even a future meeting with them in Galilee. But they did not come looking for a risen Jesus, they came to anoint His dead body. But all that is about to change, with a big surprise for them! As we previously discussed in the burial narrative, the stone once slid into place within the grove in the bedrock was quite difficult remove (Lane, NICNT), probably impossible for these women unassisted. Whether they fully realize it or not, they are dependent upon God. At this point ‘only a miracle could move it’ (Garland). And one is just about to happen!

“And looking up, they saw that the stone had been rolled back”

Not only that, but upon entering the tomb, they see (what is almost surely) an angelic being. We are now beginning to get a sense that something supernatural is going on here (see R.T. France, NIGTC). [Though the text in v. 5 reads “a young man” (neaniskon), Mark’s description of his “white robe” and the women’s “alarm” (exethambethesan – astonishment or even terror) indicates that he wants his readers to see him as God’s messenger. But see Geddert (BCBC), France, or Garland for a discussion of the alternative].

And proclaiming God’s message is exactly what he does in v. 6. As with so many angelophanies in scripture, he begins with reassurance: “do not be alarmed” (ESV). He then announces who has been risen – Jesus of Nazareth. The same Jesus who was crucified, the same Jesus who led the disciples throughout their itinerant Galilean ministry. Geddert prefers the NRSV’s “he has been raised” based upon the Greek (egerthe – Aorist passive) to the NIV (and ESV): “He has risen.” For:

Jesus did not raise Himself. God did it!

They are further instructed to “go, tell his disciples and Peter” (v. 7, ESV). The calling out of ‘even Peter’ (Geddert’s preferred translation of kai), the first time He is mentioned since his disgraceful failure, surely points us toward the restoration of the failed disciples. Note that the invitation to the reunion with Jesus in Galilee is not limited the 12 (men) disciples – these women are invited too (“you” is 2nd person plural in the Greek):

“he is going before you to Galilee.”

But don’t leave verse 7 without going back and re-reading Mark 14:27-28. Remember Jesus has already told the 12 (but not these women), before He dies and before their failure, of a post-resurrection reunion in Galilee – they will follow Him again!

“All are invited, no matter how far they have fallen.” -Tim Geddert

But now things get a little dicey with v. 8. According to the best scholarship we have, the original ending of Mark’s ‘good news’ story concludes with these ‘faithful’ women disciples fleeing from the tomb in fear and saying nothing to anyone [Note: we will discuss the longer ending of Mark (Mk. 16:9-20) next time]!

What’s up with that? First, we should understand that the women’s reaction of fear and trembling is not unusual. From a normal human perspective, it is exactly what we might expect. And from a Biblical perspective, it is similar to what we typically see in the Scripture in a divine, or supernatural encounter such as this. Geddert see’s it as a failure on the women’s part – like the twelve men, these “faithful” women disciples ultimately fail Jesus too (BCBC, p. 399). But an incredible story like this can’t be kept quiet for long (as with so many of Jesus miracles throughout Mark’s good new story). The original recipients of Mark’s story would already have been well aware that the message of the resurrection did somehow get out (France, NIGTC).

What Mark may be up to with this ending is pointing back to us, the reader. As followers of Jesus, we cannot fix our eyes on the 12, nor even on these 3 first witnesses for our example of faithful discipleship. We can ultimately only look to Jesus Himself as our model! Like these 15 disciples, we must be obedient, and go to Galilee (where it all started) to meet the risen Jesus, as Geddert explains:

We must follow him, obey him, go where he goes. Then we too will met the risen Jesus. Then our failure will be forgiven and our courage renewed. We will take up our crosses in discipleship and proclaim the gospel in mission. “Followership is never perfect, never easy, and never ending.”

“Jesus’ resurrection reverses the humiliation and degradation of his scandalous crucifixion… His resurrection sets the stage for his exaltation to the right hand of Power, where he now reigns and will return to judge (Mark 8:38; 14:62) and to gather the elect… The gospel is about the power of God, which overcomes human dysfunction and disaster.”

The Kingdom of God is secretly advancing, dependent on God’s power, not on human ability (Garland cites Geddert, Watchwords, p. 202). Our own discipleship is established by Jesus call, and sustained by God’s mercy (Geddert).