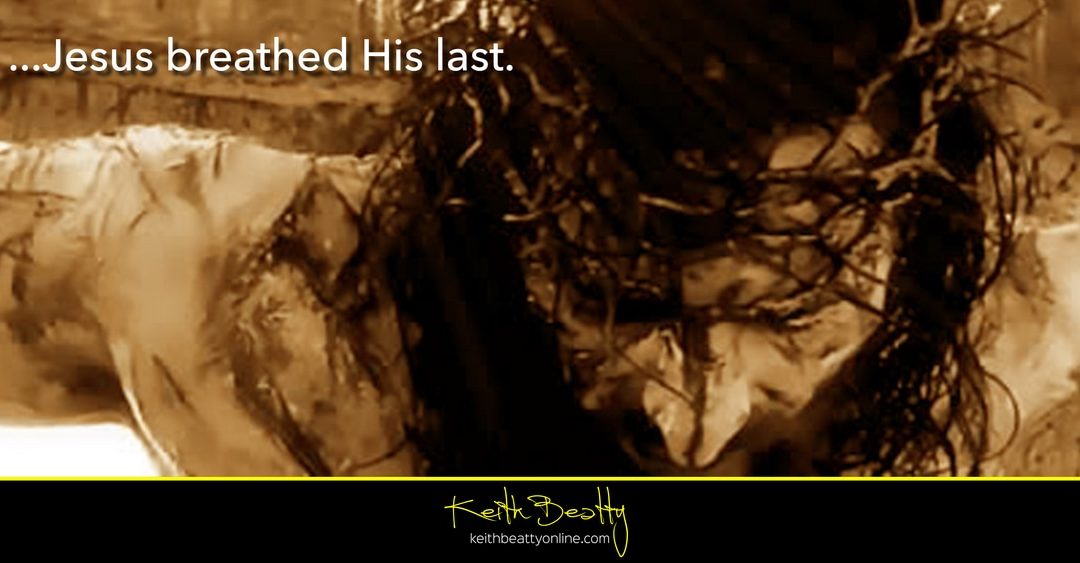 The previous passage takes place between 9 AM and 12 noon. It is now high noon (v. 33) and it’s dark for three solid hours (until the moment of Jesus’ death) – a symbol of God’s judgment (Amos 8:9) and eschatological fulfillment (cf. Amos 5:18). At 3 PM the silence is broken (as the darkness is lifted) with a loud cry from Jesus quoting Psalm 22:1 in his mother tongue of Aramaic (v. 34). Mark’s translation (into Greek) clues us in as to how the crowd might confuse “Eloi” for a reference to Elijah (v. 35). These are Jesus’ final words in Mark’s gospel:

My God, my God, why have you forsaken me?” – Jesus of Nazareth (from the cross)

In this moment Jesus identifies with humanity, experiences the horror of the worst that human hatred has to offer, and bears the penalty and suffering for that sin of humanity, all the while trusting in the will of God the Father that He will ultimately be vindicated. Note that, Mark’s original reader’s (under persecution) would have identified with Jesus’ feeling of abandonment and desperation here (NIVAC quotes Hooker, p. 375).

Scholarly views vary on this but I’m pretty comfortable endorsing the view that Jesus has the whole of Psalm 22 in mind here, (though He likely does not possess the strength to quote it’s entirety – Garland, NIVAC).

The bystanders think Jesus is calling for Elijah to come and rescue Him, but (irony again) Elijah has already come (in the form of John the Baptist – Mark 9:13) not to rescue Jesus, but to prepare the way that leads to the cross. But this makes no sense to unbelievers who (including the 12) cannot comprehend a suffering Messiah (Geddert, BCBC). The wine vinegar (Mk. 15:36, NIV) is not the same as the “wine mixed with myrrh” in Mark 14:23. But it is the same “vinegar” given in the (also) Messianic Psalm 69:21 (“which begins in sorrow and ends in triumph”) which may also give us insight into Jesus’ mind at this point (Cole, TNTC, p. 328).

This drink may indeed have helped give Jesus the strength for the “loud cry” of v. 37, just prior to His final breath. Unlike His previous cry “with a loud voice” in v. 34, one of abandonment, this is likely “the victor’s cry of triumph” (Cole, TNTC).

The tearing of the temple curtain (v. 38) can be understood as:

[Following Garland, but see Geddert for an alternate list of five views].

The centurion’s confession in v. 39 is closely linked to v. 38, and functions in tandem with the curtain “torn in two.” Whether the centurion’s words are based upon genuine faith (and an accompanying conversion) is not entirely clear, but in Mark’s gospel they function to inseparably link Jesus identity as “the Son of God” (cf. Peter’s confession of Jesus as Christ, Mk. 8:29) with His death. And we should be careful not to miss that this soldier, with a sworn allegiance to the Emperor, has attributed Tiberius’ title to this executed Jew! In addition we should note that this goes completely against his Roman understanding of both power and divinity. And finally, as a soldier well acquainted with obedience, he would have seen Jesus as “someone who had been faithful in carrying out his mission” to the point of death (following Garland).

The women in v. 40 include Mary of Magdala, another Mary (possibly Jesus’ mother or some other), and Salome (likely the mother of James & John, cf. Mt. 27:56). They were among the inner circle of disciples (including the twelve apostles) who traveled with Jesus (v. 41) from Caesarea Philippi to Jerusalem (Geddert). They function here in Mark (in the absence of the 11) as witnesses to the crucifixion, death, burial, and resurrection of Jesus (William Lane, NICNT, p. 577).

In this passage we find that our Lord and Teacher trusts God, and is faithful to His very last breath, through the most horrific of circumstances. We will also find that God is faithful and will in the end vindicate His servant Jesus (through the resurrection). The mockers, and those who hate God, His Messiah, and all that He stands for are there too. In the execution of Jesus we find all that is horrible in humanity – including our own sin and hatred that put Him there.

As His disciples, we are called to follow His example, trusting God and remaining faithful no matter what! I wish I could soften this, for your sake’s and mine, but the text simply does not allow it. And the experience of the original recipients of Mark’s gospel account in Rome, who literally faced potential death for their faith in Christ Jesus, would echo this sentiment.

“Many Christians today shy away from ever crying aloud to God or making an outcry of reproach when they are not rescued. Some do not feel that they can lay bare their true emotions to God, including their anger. They feel that such honesty reflects a deficiency of faith or blasphemous gall. This timidity may in fact reflect a sense of distance and alienation from God, because they fear that God might reject them if they are too complaining in an hour of trial… Such laments, which were a central part of the worship of Israel, have disappeared from our prayer and worship. We cannot obscure the hurtful side of life. It might be helpful in giving pastoral care to those suffering from enormous grief to teach them about biblical lamentation that cries out boldly to God. We do not cry out from the depths simply to cry out. We cry out because God is the only one who can deliver us and can answer the question “Why?”

When we find our circumstances too much to bear, the Psalms of Lament invite us to approach God (in relationship), with all of our anger and doubt, pouring out all of our raw emotion before our Abba (Daddy) God. He loves us more than we can imagine and is not afraid of our doubt, or put off by our anger and questions. When we bring our Lament before God, we stand in the shoes of our forerunners, those Biblical authors like King David, the Sons of Korah, and Asaph (that’s some pretty good company) who had the same doubts, questions, and frustrations as us. If we do this in a healthy way, we may just find a renewed faith and trust in God, even in the midst of our most difficult trials, as those before us most often did.
——————————————————————————————————————–

I don’t know if Mark intended for us to consider multiple meanings of the tearing of the temple curtain, but the context within the whole canon of scripture would seem to invite it, so I encourage you to spend some time, as a follower of Jesus, pondering these depths. The centurion teaches us that we cannot place our faith in the worldly power of Empire, but rather only in the slain lamb of the Passover.

Like the women (and unlike the twelve) faithfulness starts with showing up:

“In the current debate within the church on the ministry of Christian women, it is interesting to see this group, roughly the counterpart of the twelve, already engaged in a distinct, but just as real, ministry… two at least of these women were ‘witnesses’ of Christ’s death, his burial, and the empty tomb, even though official Judaism would not accept as legal the evidence of women (Lane). This cannot be accidental: God has accepted, indeed, chosen them as witnesses for the most important events of history.”