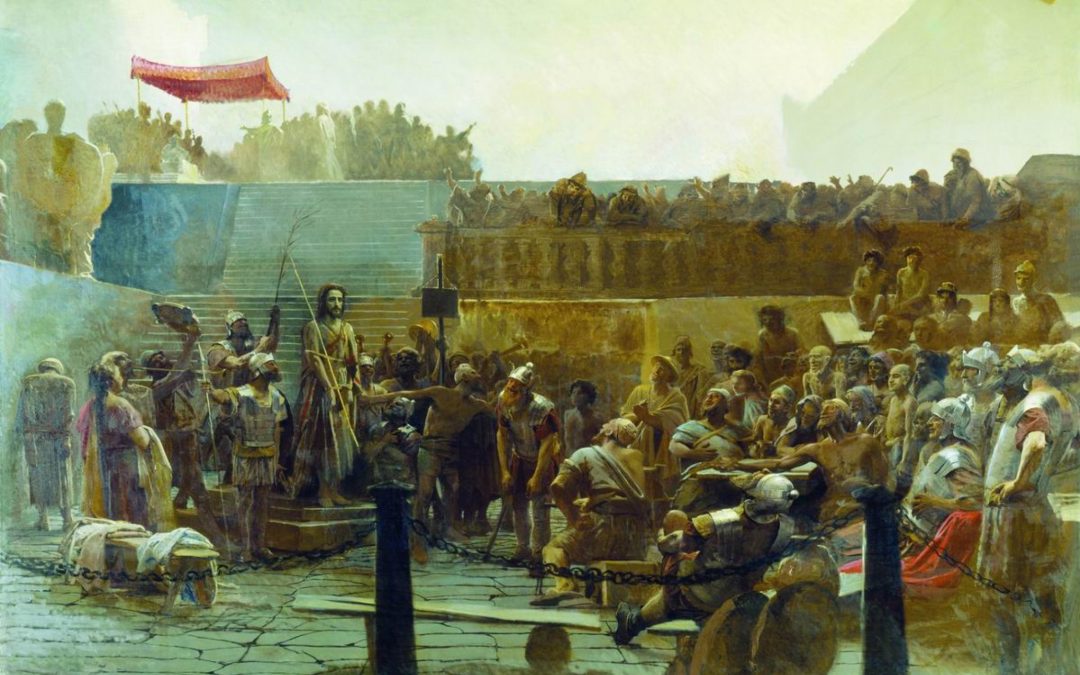 Last time, in the Roman trial of Jesus, Pilate unjustly ordered Jesus to be scourged and crucified. Now Jesus has been handed over to the Pilate’s soldiers. It is interesting to note that the scourging is not described save 4 words (2 in the Greek) in the previous pericope – “and having scourged Jesus” (v. 15, ESV). So what we have in v. 16-20 is actually just the mocking of Jesus. [The scourging was actually far worse in terms of suffering].

Jesus is brought before the entire battalion (v. 16), as many as 600 men (Geddert and R.T. France, NIGTC). At this point, after the brutality of the flogging, Jesus is surely a pathetic sight, barely able to stand or walk, and certainly lacking any strength to resist (France). What we are about to witness is more about humiliation and especially mockery, than about torture (even though it was physically appalling, it was still nothing compared to the scourging), as Mark will soon make clear.

These Roman soldiers in Jerusalem, like Pilate, would have had no love for the Jewish people. And even less for Jesus, who in their eyes, charged as a false king, was a likely leader of a rebellion by the Zionists (like Barabbas) to whom they had surely lost comrades. Jesus presented these “bored” soldiers in dusty Palestine a welcome opportunity for diversion – a kind of cruel entertainment flowing from their pent up tension in Jerusalem around the festival (Lane, NICNT).

The soldiers outfit Jesus with a purple robe (NIV) and a crown of thorns (v.17). Both are done in parody of His “royalty.” In addition to mockery, the crown of thorns adds an element of pain. In His current physical state, Jesus would have appeared as quite a pathetic king for this public coronation. The mockery continues:

“Hail, King of the Jews!” – Pilate’s Battalion of Soldiers

And then they proceeded to beat Him on the head with a reed (probably a mock scepter), spit on Him (probably a parody on the kiss of homage – Lane) – as predicted by Jesus Himself (Mark 10:34), “and kneeling down in homage to him” (v. 19). By now it should be becoming quite clear that this is all a mock coronation ceremony! Remember Jesus’ crime is high treason against Rome (a false king opposing Caesar to whom they had all sworn allegiance).

And finally they stripped Him of His “royal” regalia in preparation for crucifixion (v. 20). In conclusion:

“In this text we can see evil at work… in boorish thugs, who carry out orders with sadistic pleasure” – David Garland

But the glaring irony here is found in the fact that what the soldiers have done in mockery is in fact ultimately true. But they fail to recognize Jesus for who He really is, the King of kings and Lord of lords (Rev. 19:16).

“As a scenario it is the perfect burlesque of the truth it caricatures.” – Jerry Camery-Hoggatt

How does this text apply to us as followers of Jesus today? For one, we can examine our own nationalism in light of the example of Jesus, the suffering servant. We can look at our own heroes in most any popular movie, TV show or books. We prefer heroes who ‘blow our enemies away’ to:

“the passive suffering of a seemingly powerless savior who submits to beatings and mockery… Jesus’ way soaks up the injustice, evil, and oppression like the venom of a sting and unleashes a far more powerful force of love and forgiveness. God’s way responds to evil redemptively and short-circuits it… Our failure to choose this way stems from our failure to trust God. We may trust God to take care of the afterlife, but we do not trust God enough to let go of too much control of the here and now.”

Until next time, my friends, follow the King – who today overcomes the oppression of Empire as God’s Suffering Servant!