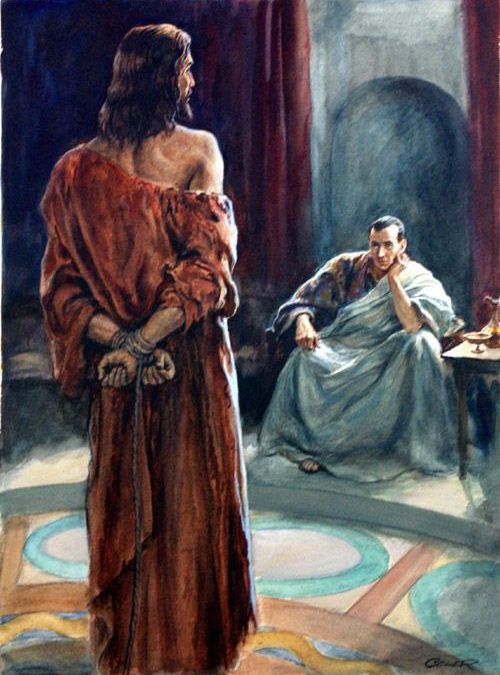 Mark now shifts the action from Peter’s trial out in the courtyard back inside to the Sanhedrin and Jesus. It is now morning. They bind Jesus and send Him off to Pilate (v. 1), which seems like so much overkill given Jesus’ peaceful, nonviolent teaching and actions. While Jesus was found guilty by the Sanhedrin of the crime of blasphemy, before Pilate the charges have morphed into a charge of high treason against Rome:

“Are you the King of the Jews?” – Pontius Pilate

The Sanhedrin has carefully manipulated Jesus claim of messiahship into a political charge of leading a resistance against the Empire (see Lane, NICNT). Jesus does not resist the designation, but His own concept of His Kingship is entirely different from Pilate’s understanding. But Jesus’ somewhat reserved admission [“You have said so” (ESV/NIV 2011), cf. “It is as you say” (NASB ’95)] leaves Pilate less than fully convinced, and therefore requiring further examination.

The chief priests are more than happy to oblige Pilate by heaping more charges upon Jesus (v.3). Jesus makes no further attempt to defend Himself (v. 5), even at Pilate’s urging (v4), leaving Pilate bewildered. In His silence, Jesus is now beginning to look like the suffering servant of Is. 53:7. Pilate is caught in a political quandary. He has no love for the Sanhedrin or the Jewish religion, and he knows that they have only brought accusations against Jesus out of envy (v. 10). Here we begin to see that, similar to Peter in the high priest’s courtyard, Pilate’s character is on trial here (Cole, TNTC). [In the end, Pilate fails the test by freeing the guilty (Barabbas) and condemning the innocent (Jesus)]. He may have wanted to release Jesus, but he cannot without a denial from the one on trial here (Garland, NIVAC). So Pilate looks for another way out…

Pilate hoped to take advantage of an old custom to release a political prisoner (v. 6), as a means of weaseling his way out of his current predicament. Barabbas was apparently the leader of a revolt fighting to deliver Israel from Roman oppression (Garland), involved in a skirmish with the Roman authorities which resulted in some deaths (v.7). So he was likely a Zealot (Cole). Some of Barabbas’ supporters were apparently among the crowd that day (v. 8). So Pilate offers to release Jesus (v. 9). But, at the coaxing of the chief priests, the crowd asks Pilate to release Barabbas instead (v. 11).

NOTE: Contrary to popular teaching, it seems that this is simply a different crowd than the pious Pilgrims who met Jesus at the Triumphal Entry and among whom Jesus clearly remained popular right up to the trial (Mark 11:32, Mark 12:37, Mark 14:2) – see Cole on v. 9-12.

“What shall I do, then, with the one one you call the king of the Jews?” – Pilate

Pilate is perplexed. The crowd not only chooses Barabbas over Jesus, but they choose death by crucifixion for Jesus (see Garland on v. 13). Pilate pushes back.

But they shouted all the more, “Crucify him.”

Pilate’s plan has backfired! He gives in to the desires of crowd (and the chief priests), releases Barabbas, and orders Jesus scourged and then crucified. Pilate has chosen political expediency over genuine justice.

The irony here is both abundant and thick. Jesus takes Barabbas’ place on the cross. Jesus’ non violent ways were no threat to the temple as the chief priests feared. But the violence of men like Barabbas (who was released) leads to a continuing cycle of violence which eventually ends in war with Rome and the destruction of Jerusalem and its temple (in AD 70)!

“Mark places the blame on the authorities for the crucifixion of Jesus. This includes both the Roman and Jewish authorities equally… Pilate was no unnatural monster; he was a man in so many ways like all others. This is what makes his story such a warning, and also so credible.”

I think we can all find ourselves somewhere in this story. Pilate’s moral failure calls all of us, as followers of Jesus, to self examination. “Is it I” (Mark 14:19, NKJV), Lord? And Jesus’ refusal to resist evil (the oppression of God’s people by the Roman Empire) with violence itself, calls us (as His followers) to something greater than the violence espoused by the bloodthirsty zealots of His day.

Until next time my friends, Follow Jesus – the suffering servant and crucified Messianic King!