Meanwhile… Peter’s “Trial” in the Courtyard (Follow Me – Part 70) 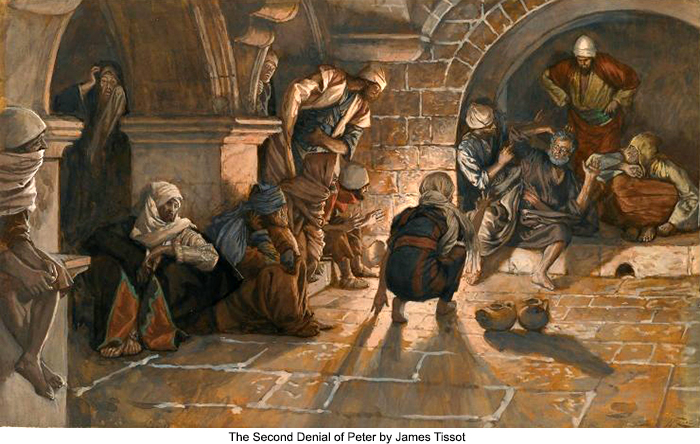 Last time we saw Jesus maintain absolute faithfulness throughout His trial before the Sanhedrin inside Caiaphas’ house. Now the action shifts to Peter’s “trial” outside in the courtyard. The two events actually occur simultaneously as we saw hinted at in v. 54 last time (cf. v. 66 here). As Jesus was interrogated, so Peter is interrogated (Lane, NICNT).

A servant girl tries to identify him with Jesus (ie. as His disciple, v. 67).

“You also were with the Nazarene, Jesus.” – a servant girl in Caiaphas’ house

As Jesus boldly, and unashamedly confesses His identity before the high priest, simultaneously Peter denies that he even knows Jesus (v. 68) before this servant girl (Garland, NIVAC). Peter is evasive and walks away.

“and the rooster crowed”

The accuracy with which Peter fulfills Jesus’ prophecy is both stunning and disturbing (see Geddert, BCBC)! This servant girl is proving to be quite the thorn in Peter’s side. She hunts him down, and this time she is even more confrontational!

With each successive denial, Peter calls the judgement of God down upon himself! And now the bystanders join in (v. 70). Peter’s Galilean accent gives him away here in Jerusalem. It is not much of a jump for them to conclude that he is a follower of this heretical Rabbi from the low-life north.

“I do not know this man of whom you speak.” – Simon Peter

The rooster’s second crow signals that it is morning, and it is time for Peter to wake up! There is an eerie similarity here to Peter’s failure(s) in the garden of Gethsemane.

Peter “awakens” to the nightmare of the realization of his failure to remain faithful to the one who loved him so much, as he remembers Jesus’ words just hours before:

“Before the rooster crows twice, you will deny me three times.” – Jesus

The relevance of this account within Mark’s community is important here. They were facing persecution under Imperial Rome. The question “Aren’t you one of them?” is a very realistic one for them, and could easily mean that your life is at risk! And John Mark’s close relationship with Peter gives it even more punch. And what an encouragement, both for them and for us, that the one who failed his Lord so thoroughly, could be restored so graciously and completely (see Lane, p. 544).

So, if you’ve denied Jesus, been ashamed of the gospel, and/or spoken all manner of evil against Him, even as a follower of Jesus, He bids you: