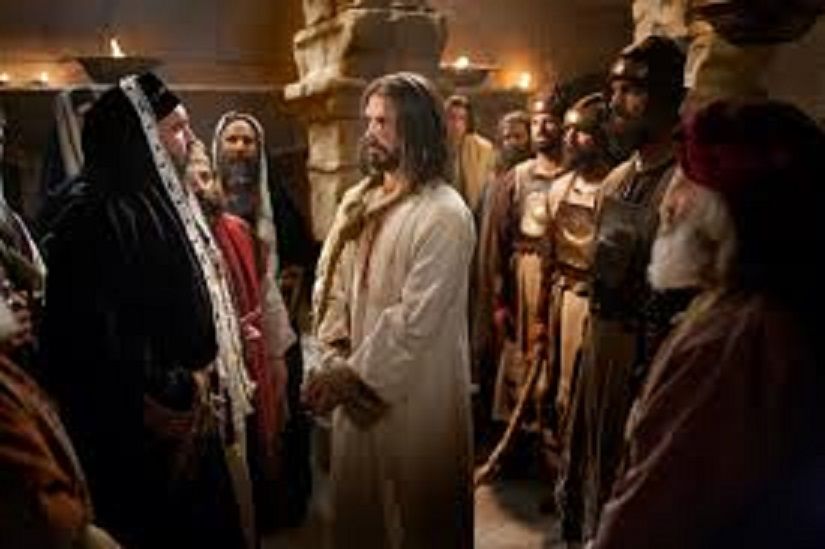 The crowd that arrested Jesus now delivers Him to the Sanhedrin (v. 53) from which they were sent on their mission of seizure (v. 43). The fact that the council were called together in the middle of the night for a trial on the night of Passover is highly irregular at best, and quite possibly illegal – indicative that their purpose is insidious! Peter following at a distance (v. 54) begins to reveal to us that there are actually two “trials” going on here: the legal proceedings against Jesus, and the “trial” (testing) of Peter (more on that next time). Verse 55 makes it clear that the outcome of this “trial” has already been predetermined by the chief priests, elders, and scribes, despite the overwhelming lack of evidence. And we already know from previously in Mark’s gospel that the religious leaders of Israel have made it their goal to destroy Jesus!

“it has decided beforehand that the trial must lead to a guilty verdict and a death sentence.”

Unfortunately for them, the “witnesses” they called were no help to their cause (v. 56-57). Their testimony (in v. 58) is in fact a distortion of a true historical fact. Jesus did predict the destruction of the Temple (as an act of judgment of God). But He never claimed that he Himself would be the one to actually carry out its destruction (following Geddert). For us, reading this in retrospect, ‘another Temple made without hands’ can be understood to refer to the new covenant community (1 Cor. 3:16-17) created by Jesus and His resurrection. Once it is destroyed, there is no need to rebuild it – in the new testament era the new Israel, the new people of God take it’s place!

The witnesses fail to provide any evidence that will convict Jesus (v. 59), so the high priest turns to questioning Jesus directly (v.60). But Jesus refuses to respond to the witnesses charges made against Him (v. 61). This had to have frustrated the council (Lane, NICNT). So now the high priest resorts to confronting Jesus by asking Him directly if He is the Messiah, the Son of God (the high priest is simply being pious in avoiding speaking God’s name directly). For the first time in Mark’s story, Jesus admits to it: “I am” (v. 62), only now “when there is no possibility that crowds will rise up and crown him king” (Garland, NIVAC). The secret is out: Jesus has just copped to being God (I am), the Son of Man (Dan 7:13), and the Messiah (cf. Ps 110:1 with Mark 12:35-37), exalted King (at God’s right hand), and eschatological judge (“coming with the clouds of heaven”)!

The high priest’s dramatic response of tearing his garments (v. 63) and the charge of “blasphemy” (v. 64) may be designed to win the others in the court over to his side.

“And they all condemned him as deserving death.”

The verdict is reached. The sentence is pronounced! And then they spit on Him, beat Him and mocked Him saying, “Prophesy!” (v. 65). The irony here is so thick. For these are straightforward fulfillment of three prophecies by Jesus – precisely what He said the “chief priests and the teachers of the law” would do to Him (see Mark 10:33-34)!

“we must see that those who hate revolutionary ideas and feel responsible to God for keeping intact their vision of the American way of life, for example, would probably have acted in exactly the same way…

Jesus was killed by self-serving religious leaders in control of the temple, who were intent on preserving their power…

The Jewish leaders feared what the Romans might do to them, not what God might do. They were swollen with ecclesiastical pride and filled with professional jealousy at the success of a true religious leader. They were embedded in a prosperous and mighty institution, and institutions can forget their original purpose and become concerned only with self-preservation… Confront them today and see what happens.”

This is the very definition of Institutionalism! (“strong attachment to established institutions, as of religion.” see Dictionary.com definition #2) – when we love the organization itself more than the mission for which the organization was originally formed! Garland continues (concluding that everyone is ultimately guilty):

“Every group of religious people has in its midst the wily and unscrupulous ecclesiastical politician, the fanatically righteous headhunter, the spineless toady who stands up for nothing, the turncoat who will switch to whatever he thinks will be the winning side to further his career, and the pious who are intent on mercy and justice. These first-century Jewish religionists are not the only ones who were guilty. They embody the universal guilt of all religious people. Pilate was also guilty, and he embodies the universal guilt of an idolatrous state. Judas too was guilty; he betrayed his Master.”

I’m pretty sure that we can all find ourselves in there somewhere. And with that happy thought, I conclude. Until next time…