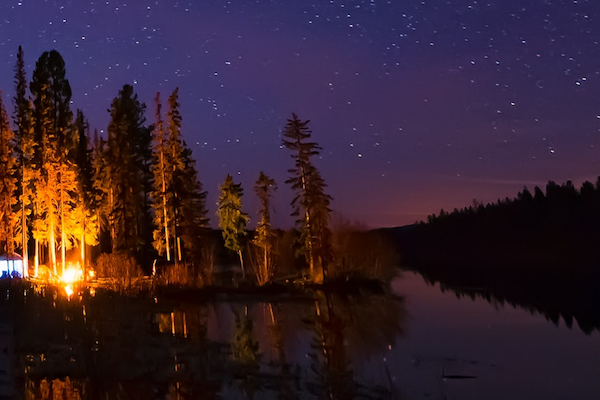 A crackling fire provided the perfect soundtrack to their annual get-together. The evening air was cathedral-quiet, reverential. A log shifted, and a swirl of sparks gusted heavenward. A choir of crickets serenaded the shoreline, augmented by the occasional blip of unseen fish breaking the lake’s tranquil surface.

“There is nothing new under the sun.” The Scholar quoted perhaps the most oft-repeated phrase from his area of academic expertise. “What we’re experiencing today was known to the ancients, as well.”

The Historian nodded, every solemn mannerism steeped in an aura of musty books and tweed. “Same as it ever was.”

The Younger rotated a marshmallow skewer over the fire. “It doesn’t feel normal,” he said, eyes fixed on his marshmallow—his third attempt at browning without burning. “Their attitudes tell me they’ve given up. And none of them want to hear from me about it—they’ve made that clear. Our faith used to be our common bond, but now it’s That Which Must Not Be Named. I feel handcuffed.”

The Elder sipped his coffee and said nothing, content to allow his circle of friends to answer.

“The human heart has a rather predictable tendency to wander.” The Scholar puffed on his pipe; smoke wreathed his long face. “The ancient Israelites abandoned their covenant with Yahweh and turned to idolatry with alarming frequency.” He paused, his thoughtful countenance illuminated by the flickering firelight. “But Yahweh was faithful when they were not, sending prophets and judges to turn them back to faith. Nehemiah reading the Law to the people comes to mind. Or perhaps King Josiah’s discovery of the Torah in the temple ruins, and his subsequent reforms.”

“Church history records the same pattern.” The Historian took up the narrative, squirming on the log in search of a more comfortable position. “The post-Nicaean priesthood was no stranger to corruption, and there were many reforming movements in the Catholic church, long before the Reformation.”

“Isn’t that why there’s so many Protestant denominations?” A log shifted and the Younger barely rescued his marshmallow from the resulting flare-up. “A new movement seeking to recapture the vitality of the New Testament church?”

The Historian smiled faintly. “Yes, but many movements ended in heresy, even as they advertised themselves as a return to ‘biblical’ Christianity. One must exercise discernment.” He leaned forward, elbows on his knees, staring into the campfire. “But the Holy Ghost faithfully brings revival—if I may use the term—to rejuvenate passion for Jesus, even in a cold-hearted, corrupted church. If there was ecclesiastical resistance … Well, those whose hearts had been revived were often given little recourse but to break away.”

“That reminds me of the time when David—the ‘man after God’s own heart’—replaced Saul as king.” The Scholar knocked his pipe against his knee, dislodging the dead embers. They fell to the ground, indistinguishable in the dirt. It was hard to tell whether or not he intended his action as a dramatic metaphor.

The Elder refilled his camping mug from his thermos. Steam rose in a miniature imitation of the smoky campfire. He spoke for the first time, with a nod of appreciation to each of his colleagues. “The lesson from both biblical and church history is God’s faithfulness to rekindle the embers of a dying faith.” He took a cautious sip of coffee. “The Holy Ghost can be trusted to reignite passion for Jesus. Your friends’ spiritual state may fit what Plymouth Brethren theologians call the ‘great falling away’ … I won’t debate that. But the spiritual health and vitality of the Church is in Someone else’s hands. I believe the Holy Ghost will do exactly as Jesus promised.”

“Revival.” The Younger uttered the single word in a neutral monotone. He reached out and stirred the campfire with a stick. Sparks flared upward in response. “Let’s hope so.”

The Elder raised his coffee mug in salute, a knowing twinkle in his eyes. “Let us pray so.”