What to do When the Temple Gets Destroyed? (Follow Me, Part 56) 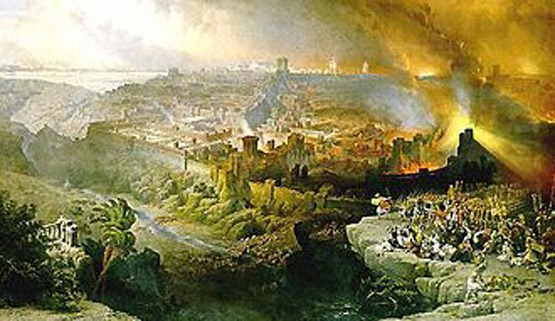 Mark 13:14-23  The Desolating Sacrilege and Call to Flee Judea

Jesus now comes as close as He ever will to answering the disciples’ question about when to expect the destruction of the Temple which He just prophesied. Daniel’s prophecy (Dan. 9:27, 11:31, 12:11) 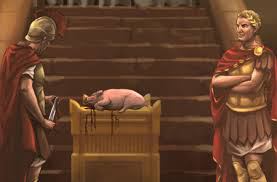 of “the appalling sacrilege” is not ultimately fulfilled by Antiochus Epiphanes in the Macccabean period. The event in question results in God rejecting the Temple outright (Ez. 7:14-23). Our narrator, John Mark, (“let the reader understand”) sees the fulfillment in his own day. Flight then [not at the end of history (cf. Rev. 6:15-17), when it would be worthless] as the only response for Christians in Mark’s day is Jesus’ repeated exhortation (Mark 13:15-22).*

What follows is Jesus discussing this flight from a number of angles. In verse 15-16 the flight is urgent! There is no time to stop and grab a few critically important items on your way out. In verses 17-18 we learn that the circumstances of the flight will be difficult! We should see here not harshness, but instead Jesus’ compassion for pregnant and nursing mothers in such trying circumstances. In verse 19-20 Jesus emphasizes the reason for His command for His followers to flee.

The tribulation** during those days will be such “as has not been from the beginning of the creation that God created until now, and never will be.” (Mark 13:19)

And finally, in verse 21-22, deceivers will attempt to lead (“the elect”) believers (“astray” – v. 22) into disobeying Jesus’ command to flee, with their usual “signs of the end” speculation techniques.

The bottom line here is that if disciples of Jesus, upon seeing the desecration of the Temple, delay their flight until the siege of Jerusalem by Rome there will then be no escape. Starvation and violent destruction will be the only two options at that point (NICNT, p. 467).

[So yeah, as a general tenant, we might just want to obey what Jesus says (Just sayin’).]

Neither Jesus, nor Mark seems to give us any indication of the time period between this tribulation and the return of the Son of Man (in v. 24-27), nor if the desolation & destruction of the Temple and the war in Judea are associated with the eschaton (Geddert, BCBC). Also note that the grammar in v. 14 (see ESV: “the abomination of desolation standing where he…”) – where a masculine participle modifies a neuter noun – appears to personify the abomination. But it is unclear if an even greater sacrilege will occur in the future when “he” appears? 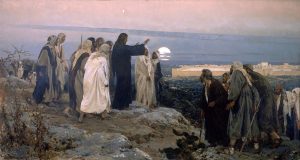 Jesus’ final exhortation (v. 23) to His followers is to “be on guard” (Blepete – taking us almost all the way back to the beginning of this teaching, v. 5).  Why? Because He has told us all things beforehand! What things? The specific timing of events leading to the end? Absolutely not! Rather, the opposite:

Jesus specifically, here in this discourse, warns His disciples against those who would point them to “signs.”

What Jesus does provide is assurance of God’s providential care. God cuts short the days of tribulation “for the sake of the elect” (v. 20) to what they can bear without losing their faith. At the risk of repeating myself: followers of Jesus are called to faithfulness in tribulation, which provides opportunities for witness and the proclamation of the good news of the kingdom of God. This my friends, is our mission! The mission of God: Restoration of all creation back into right relationship with their creator!

**This is the first and only mention in the Olivet Discourse here in Mark of a tribulation, with no indication that it is the Tribulation