Does Our Order of the “Now” and “Not Yet” Prioritize? 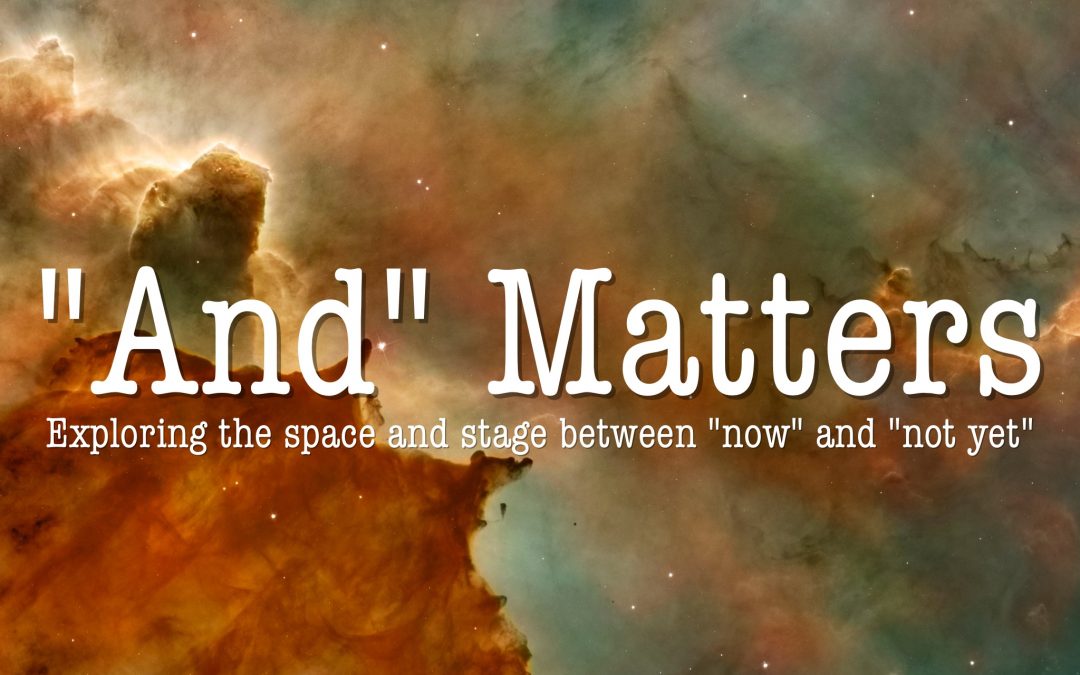 One of my favorite worship albums is Jeremy Riddle’s “The Now and Not Yet.” This “now and not yet” theology was made somewhat “famous” amongst Evangelicals by the scholarly work of George Eldon Ladd, especially in his The Presence of the Future and The Gospel of the Kingdom. The theology behind Jeremy Riddle’s album, and much of the Vineyard’s values and practices, is the idea that Jesus inaugurated (initiated) the in-breaking of God’s kingdom at his first coming (e.g., Jesus’ words in Luke 4:18-19). It’s now presently both having come in the 1st century and coming again and again as the kingdom breaks into our world. Yet Jesus’s first coming (and the many in-breakings that occur when the Spirit is at work) isn’t the final consummation of the kingdom of God. In other words, there’s a biblical-theological reason behind why death and sickness and sin are still in existence in our world. It’s because the kingdom of God has not come in it’s fullness. The big $25 theological words for this is “Inaugurated Eschatology.” This conception of the present and future realities understands that the kingdom of God has both come, is coming, and will fully come in the future.

Okay. Take a deep breath if that was a lot because it was a lot to type!

When I talk about the subject of the kingdom of God and when other people talk or write about the subject, the phrases “now and not yet” and “already and not yet” are always organized in that formula. The kingdom is put together as first the “now” and secondly the “not yet.” It’s described as the “now” followed by the “not yet.” It would seem that the only way to briefly describe the ontological nature of God’s kingdom is to first write or say “now” or “already” and then to end with “not yet.” Does that make sense? Are you with me? I’m observing that when people write about or talk about the kingdom of God, they always use the phrase and concept of “now and not yet.”

I wonder (and I’m just thinking out loud here)… I wonder if how we order the nature of the kingdom of God is sometimes unhelpful or unhealthy in how we understand the kingdom of God. In the same way that theologians have been known to debate the ordo salutis (Order of Salvation), I wonder if we should have discussions about the ordo regno (Order of Kingdom) because our ordering may influence our understanding of the nature of the kingdom as well as what we prioritize (and value).

We live in tension. While it has been suggested that only our experience of the kingdom is “now and not yet,” good biblical-theology suggests that the kingdom actually currently exists as both “now” and “not yet.” It’s ontological make-up is both the current in-breakings and future fulfillment. The tension is that the kingdom is both “now” as well as “not yet” and won’t become “totally and completely and finally here and consummated” until Jesus comes back and sets up his kingdom here on earth.

So it would seem that one of the crucial and valuable questions we should be asking is this: What’s up with the word “and” in our understanding of the kingdom?

In theological dialogue, the concept of liminality has been helpful in how I think about this “and” space. In my dissertation, I proposed the following:

“Liminality, within theological dialogue, is related to the transitional stage(s) between states. This invokes eschatological questions in a way that the Vineyard’s “already and not yet” approach to the kingdom of God may both appreciate and begin asking. On an anthropological level, related to ontology, how might the reality of liminality explain the concept of simul justus et peccator (simultaneously righteous and sinful) in relation to the eschatological tension exhibited in the statement that “you are and are not yet what we will be”?”

This is to say that we are currently living in a transitional space/stage. We currently live in that “transitional stage,” the space between the “now” and the “not yet.” In fact, I think it’s safe to say that the Church sacramentally exists as a means to the world as the “and” of the kingdom, but that’s for another blog post.

My point is that the “and” between these two aspects of the kingdom, the “now” plus the “not yet,” seems to have far more significance than we often give credit too. Yet we tend to spend all of our time focused on the “now” or the “not yet” or, in the Vineyard, try really hard to keep the tension even though it’s super challenging to do so.

Since words matter, and our ideas are important, especially in relation to God, Scripture, and the Christian life, I think we need to spend more time thinking about that stage and space known as the “and.” What does “and” actually mean? How should we understand and explain this “space” in our conceptualization and experience of the kingdom? What strengths and weaknesses arise as we “thicken” our “andness”?

One concern I have about how we order our explanation of the kingdom is related to the issue of prioritization. I wonder, and again I’m just kind of “thinking out loud,” but I wonder if our order of our understanding of the kingdom may shape us in both positive as well as unhelpful ways.

But what if the “not yet” is still very much related to and connected with the kingdom? How might the kingdom of God still be very much “in-breaking” in the midst of the “and” as well as the “not yet”? While it’s certainly true that many Christians have such low expectations that they essentially consign supernatural expectation to fantasy-land, it seems to be equally concerning that people are unable to identify the work of God in the midst of what seems to be the perceived absence of God’s presence. Like when those close to us die after we’ve spent hours upon hours praying for them and yet in the midst of the heartache and despair, God is very real, very present, and very sustaining. Might the kingdom actually be present?

I guess I’m pretty convinced that it’s unhelpful to set the “now” against the “not yet.” After all, I think that when many people see or hear “now and not yet” what they actually see or hear is “now versus not yet,” as if they are in opposition to each other, but they aren’t. The kingdom of God currently exists as a “now and not yet” reality. It is simultaneously currently coming and coming in the future.

On the other hand, if we prioritize the “not yet” before the “now,” I wonder if people will become faithless wanderers who have no vision or expectation for powerful expressions of God’s healing mercies. People whom we encounter that are suffering from demonic oppression will be delivered into a category that assumes that today’s trials must be endured until some far off eschatological event that we have no vision to see experienced today.

Becoming an “and” person in an “and” community

As the pastor of a local church, I don’t have the luxury of rolling into a city to speak at a conference declaring that everyone will be healed and that all people have to do is have faith. Instead I have to teach the Christians that God has placed into my life that God both provides healing mercies as well as grace in the midst of suffering, loss, and defeats. I have to walk people through questions and the challenges that arise when healing doesn’t come. I have to both teach people John Wimber’s five step healing model as well as prepare people to die well or to be able to continue trusting God after all of their prayers and fasting has not been answered in the way that they desired. I don’t have the luxury to either suggest that God doesn’t do miracles today (which would actually be easier sometimes!) or that he automatically has to do miracles if we do all of the right things. I have to live in tension. I have to live in both the “now” and the “not yet.”

In other words, I have to become an “and” type of person who serves as an “and” type of pastor trying to faithfully create and maintain an “and” kind of community. After all, God’s kingdom is both now present and not yet in it’s final consummated form. But it will be. My kingdom reality is far more “both/and” rather than “either/or.”

I wonder if having further discussions about the “and” would help us in the Vineyard avoid splintering into those who are all about the “now” and those who are “realistically in the present not yet.” It seems like some of us are trying to keep our eyes focused on the reality of the kingdom’s coming and in-breakings that equate to signs and wonders today while others of us are trying to be pastorally sensitive to those who do not experience the supernatural miracles and who are often made to think they are somehow less than those who do. Not to mention that we’re, like, totally overlooking vast amounts of space where God’s kingdom is at work simply because we’re only focused on “power” and “miracles” and “healing” and 1 Corinthians 12-14 while totally overlooking 2 Corinthians 4:8-12.

I don’t know. I’m just kind of thinking out loud here and I realize that this might seem like an issue of semantics or nit picking at terms and phrases. Those are fair observations. But I do wonder if our mental assumptions regarding the ordering of the “now” and then the “not yet” is causing us to prioritize the nature of the kingdom of God in a way that is actually both inaccurate but also pastorally irresponsible.