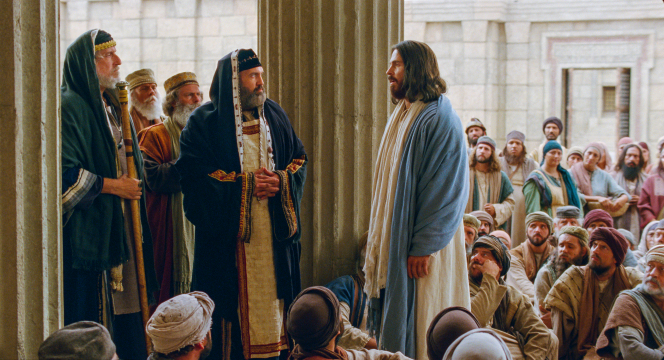 After a brief stop at the fig tree on the way into town, Jesus and His disciples arrive again in Jerusalem (v. 27). At the Temple, Jesus is confronted by the chief priests, the scribes (they’re still ticked about yesterday) and the elders. By what authority are you doing this stuff (i.e. expelling the merchants from the court of the Gentiles), or who gave you the authority to do it? (v. 28) – the guys who think they are in charge want to know!

Jesus answers their question with a question (this is actually a common Rabbinic debating technique). Jesus aligns Himself with John the Baptist (both of them effect a split between the leaders and the people as they both oppose those who stand against God). The trick here is that Jesus makes His answer dependent upon theirs (v. 29).

There is of course only two possible answers to His question. Jesus’ authority, like John’s, comes directly from God (cf. Mk. 9:37), not from the religious establishment. His opponents now understand full well the predicament of their current situation. The popularity of John and Jesus among the common people leaves them no viable options (v. 31). The big dogs of religion are afraid of the populace (v. 32).

Popularity, it might seem, is the bane of every religious leader. Are we going to do what God says, or are we going to “give the people what they want” (to quote The Kinks). The religious leaders here couldn’t even do what they thought was right (even though it was in opposition to the will of God). The important thing for them was to hang on to their position and power.

They opted to take the easy way out – they lied: ‘We don’t know’ (v. 33). And so, although Jesus never answered their question, His implicit answer stands:

“Jesus’ authority presupposes a divine commission and authorization with power; the specific feature of this authority is that it is inseparable from the proclamation that the kingdom of God had drawn near” (Mark 1:15) – William Lane**

So what’s a disciple to do? Follow Jesus with everything you’ve got. Go all in, dig deep and give Him the best you can muster – heart, soul, mind and strength! Following the Rabbi means to imitate the Master in all He does. Study His teachings, His ways, His manner with people, and then seek to be like Him in every way. Jesus is the good guy in the story, not the guys in the big hats. He is the one sent by God – that is the source of His authority (not the endorsement of a human institution like the priests and scribes had from the Sanhedrin). And here’s a bonus kids: the authority that Jesus had, 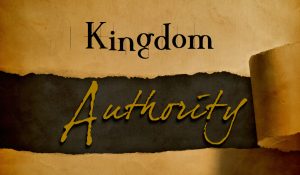 He gives to us as His followers (Lk. 10:19), and the same power that raised Jesus from the dead is alive and well, living in us (Eph. 1:19-20). So I’d say we ought to be able to pull off some pretty awesomely cool kingdom stuff in His name (i.e. in His authority) if we give our all to follow Him as the disciples did. Jesus is the King of God’s Kingdom. Our prayer should be: Your kingdom come, on earth as it is in heaven. The kingdom of God is already, but not yet. We are commissioned by God to bring the kingdom of God to this present world (inaugurated eschatology). We, are called to make disciples, who make more disciples – not just a few religious elite “teachers” – but all of us, as followers of Jesus, are called to be “fishers of Men” just as Simon and Andrew were on that day when they first met Jesus along the shore of the sea of Galilee (Mk. 1:17).

“Follow Me” says Jesus… “And immediately they left their nets and followed him.” (Mark 1:18) 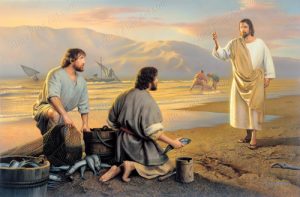 *For those who are paying attention, you may have noticed that we skipped v. 26? “But if you do not forgive, neither will your Father in heaven forgive your trespasses” is omitted from Nestle-Aland (UBS4) because it is not found in the earliest witnesses of all text types. It was likely added by copyists in imitation of Mt. 6:15 (see Metzger’s Textual commentary on the Greek New Testament). You can find verse 26 in your friendly, local neighborhood copy of the KJV/NKJV.