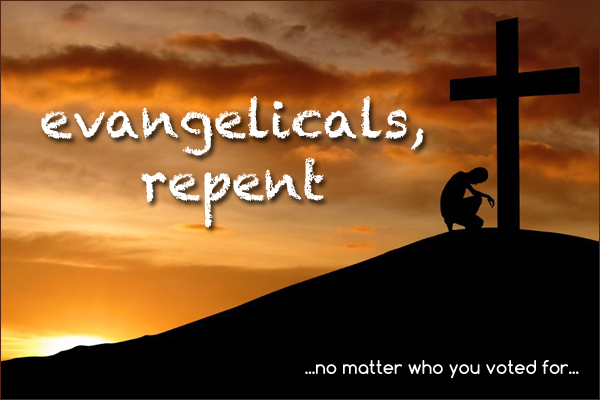 If it hasn’t been obvious before, it’s obvious now — as in: ‘how could you possibly miss it?’ — that evangelicals need to do some serious soul-searching, humble themselves, and REPENT.

And no, actually, this isn’t just a cheap shot at the president-elect of the country south of Canada. If anything, their POTUS-to-be is a warning, or maybe a symptom, of a problem that goes back for years. In some ways, ‘The Donald’ is the inevitable present outcome of sinful decisions made in the past.

And while it’s fairly easy to see the detrimental effects in the most recent American election, evangelicals in general have oft-times been guilty of the same blind capitulation to error.

In just under two months, a man who has been variously called bully, racist, misogynist, xenophobic, vulgar, crass, manipulative and immoral (plus a few additional epithets I wouldn’t repeat even to a cockroach), will be known by a new nick-name: “Mr. President”.

And white evangelical Christians voted in massive numbers for him, and in all likelihood, were the deciding factor in the election.

But even if “Crooked Hillary” had won instead, evangelicals would still need to repent. And no, not because of Clinton’s position on the abortion issue.

Evangelicals need to repent for something far more insidious:

In more countries than just America, evangelicals have long been guilty of pursuing political power in the name of advancing the Kingdom of God. From somewhere came the idea that worldly power is necessary, or at least an advantage, for accomplishing God’s purposes.

In contrast, Jesus told the political powers of His day: “My kingdom is not of this world” (John 18:36).

Much has been made about the long-reaching negative consequences that befell the Church when Emperor Constantine proclaimed Christianity the official religion as he sought to consolidate his Roman Empire.

Many have also noted, throughout church history, the detrimental long-term effects that resulted when the church was controlled by the State.

Conversely, what many Christians seem to be pursuing in recent years is a State controlled by the Church. This isn’t surprising, if one has embraced a “Kingdom Now” (Latter Rain) paradigm, where believers think they will usher in the Kingdom and then turn it over to Jesus later. But it’s not just charismatic extremists who need to repent.

The root goes much further back. Remember the “Moral Majority” movement of the early 1980s? When Fundamentalists decided to use political power to force Christianity — or at least Judeo-Christian morality — on the masses? And then evangelicals jumped on the Moral Majority bandwagon as well, just in case it might work?

(Ironic parenthetical question: Why is it so horrifying to think that Sharia Law might be imposed on the populace, but it’s perfectly acceptable for fundamentalist Christians to do exactly the same thing? Just wondering.)

No, if there’s anything evangelicals around the world need to repent of, it’s for embracing the seductive and idolatrous lie that the Kingdom of God will be advanced through political power. The pursuit of worldly power has resulted in evangelicals supporting worldly politicians, and becoming worldly themselves in the process. As evangelicals, if the shoe fits, it’s time to repent.

All evangelicals, not just the white males.

The first disciples had the same problem; we’re still learning the same lessons they had to learn:

Then they gathered around him and asked him, “Lord, are you at this time going to restore the kingdom to Israel?” (political power for their people)

He said to them: “It is not for you to know the times or dates the Father has set by his own authority. But you will receive power when the Holy Spirit comes on you; and you will be my witnesses…” (spiritual power for the advancing of a different Kingdom) (Acts 1:6-8)

Yes, it’s time for evangelical Christians to repent. We serve a different King, and we are called to partner with Him to advance a very different Kingdom.

Earthly riches are full of poverty.