Fundamentalism Is The Fear Of Authenticity Getting Out Of Hand 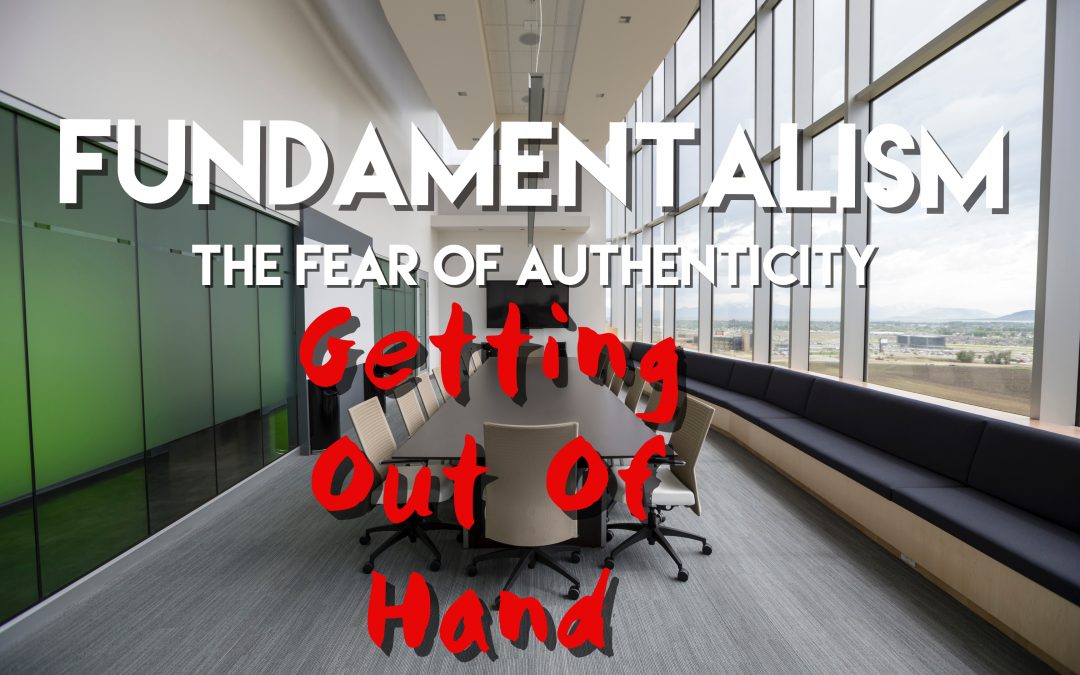 I was talking with some friends this morning and it brought back a memory I had in Bible college. I remember my first few weeks at the school very well. I was just just beginning to experience what a community driven by the maintenance of rules, standards, and tradition in the name of Jesus was all about. I was taught that these things were maintained for the spiritual formation and the character development of the students. I was at the school to learn more about Jesus and what it meant to follow him but at the same time I was very lonely, scared and I honestly felt like a fish out of water around folks that had either been raised up or already conditioned with these rules, standards and traditions. It was a crazy time for me those first couple of months.

I had brought my guitar and harmonicas with me to college with hopes of continuing to write music and find comfort in singing and making music for the Lord. These things brought me great comfort.

Within my first week at college both my guitar and harmonica were deemed “illegal” and not allowed to be played anywhere on campus. I was devastated to say the least and totally confused. I had a couple of narcs in my room and dorm who would tattle on me if they found out I was playing and I would receive little “sin tickets” called demerits for breaking the rules. If I wasn’t careful the guitar and harmonica would be taken away from me.

What was I to do?

Before I move on I should make it clear that when I got to this college I was like a weird carnal alien of a person who lived the life that most of the preachers and evangelists used as fodder for sermon illustrations right before the altar call. I didn’t fit in. I was too loud. Too nefarious. Too full of myself. Too worldly. I had fuzzy dice hanging from the mirror of my black car. I didn’t want to be these things, I didn’t know that I was these things, actually I just wanted to follow Jesus that’s who I really was. I remembered being back home while trying to through the long hot nights of a late Wisconsin summer. At home we would sing the song “Just as I am” and it brought peace to me back home knowing that I was accepted by God and loved just as I was. But here in this strange place with these strange people it seemed to mean something else. In this new place I needed to quickly learn how to be someone else or I wouldn’t survive. Any expression of the Able Baker that arrived at my college needed to die. I began to feel very guilty about who I was. I began to hide my sins so no one would know about the parts of me that were not acceptable or that might “cause another person to stumble”. I learned how to do this by watching the leaders of the school. The Gospel became something more like behavioral modification for the sake of fitting into some small obscure subculture to me and though I didn’t know it the Gospel of Jesus Christ in all of it’s simplicity had been lost to me at this place only to be found again six long years later.

But, as I said in the beginning of this article a conversation this morning brought back a most vivid and particular memory from college.

The memory was of me playing my guitar in the small dark closet of my dorm room when no one was around.

“Why?”, I thought to myself this morning, would a “Christian” college create an environment in which a young man like me is forced to be authentic with God in a closet so that others might not stumble?

The reason I needed to play my music in the closet is because fundamentalism at its heart is the fear of authenticity getting out of hand. This is my new working definition of fundamentalism. I think some really fake business folks created fundamentalism or perhaps a scientist because it lacks authenticity and for the most part seems to grow best in a clinic, library, lab or some kind of vacuum. It produces a surface of simulated authenticity while attempting to keep the wild and unruly truth of the genuine power of the Gospel in closets. Fundamentalism as a  ethos is the kind that belongs in the toilet but has been somehow candy coated to avoid the unpleasantness that lies just beneath the surface. I know because I have been drawn to its sweetness and in hunger I have gone to far.

You might be tempted to think to yourself “wow, that sounds like a crazy place? I’m glad i’m not a fundamentalist.” But I want to warn you I see it everywhere. If a group of folks anywhere like you for who you “could be” or for your “potential” in the name of God you are among some kind of fundamentalist ethos. Churches all over fear that authenticity might get out of hand. Congregations everywhere have secret rules for emergencies like this for fear of feeling uncomfortable, insecure and out of control. Everything is very staged and well placed on Sunday morning for many places of worship from the smoke machines, the worship leader’s tattoos to the pastor’s job safe sermon. I even see it in my own heart and still do at times. As a pastor I am often afraid of the unknown and I like to counter this fear with rules and control. God knows that under my ministry and leadership I have probably “closeted” people and that’s a humbling thought. If I have done this to you and you are reading this I am sorry for that.

Perhaps the best place for me while I was in Bible college was the closet though. Those were some special times between God and I because it was in the closet that Jesus helped me to see that he wasn’t among or in the superficial but the authentic.

Matthew 6:6,  “But when you pray, go away by yourself, shut the door behind you, and pray to your Father in private. Then your Father, who sees everything, will reward you.” (NLT)