The Awkward Continuationist: Kingdom of God 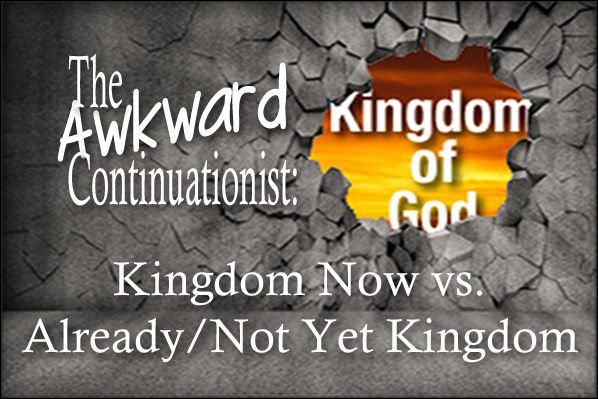 “Is this church going Kingdom Now?”

She asked the question with a furrowed brow, mirroring the expression on her husband’s face as he hovered next to her.

“Kingdom Now?” I replied. “Never heard of it. What do you mean?”

She gave me a quick thumb-nail sketch describing some of the signature teachings of Kingdom Now advocates, and my initial response was a cheerful: “No, we are definitely not going in that direction at this church! Not on my watch, anyway.”

She didn’t appear convinced. Her husband said nothing, but looked as if he wasn’t sure that he believed me.

And with good reason, I guess. They had been raised Pentecostal, which meant they were already very familiar with the Latter Rain movement, a.k.a. Kingdom Now, or Domininism. They recognized the “buzz words” that had begun showing up in our Vineyard church.

I, on the other hand, had been raised in a cessationist evangelical denomination, and was blissfully unaware of the Latter Rain or its teachings. I had heard the same “buzz words” and thought they were strange, but didn’t realize the full implications.

After doing the background research for writing Post-Charismatic: Rekindle the Smoldering Wick, I now realize — in the perfect clarity that hindsight provides — why the concerned couple seemed unconvinced by my assurances that our Vineyard wasn’t moving in that direction. They saw the signs; I didn’t.

The Kingdom of God is a very important concept throughout the Bible. It was Jesus’ introductory message during His earthly ministry: “repent, for the Kingdom of God is near”. There are many denominations, including the Vineyard, which explain it as “the already and not yet” — the Kingdom is “already” breaking into human history in the ministry of Jesus, and “not yet” because it won’t come in its fullness until the second coming of Jesus. George Ladd wrote eloquently on this topic is several of his books (which were my inspiration for writing The Genesis Cafe).

The similarity of language in the Latter Rain view is probably why a lot of people don’t recognize the trajectory away from orthodoxy. (And possibly might also explain why people today are suddenly lauding its proponents like William Branham — I hope they’re just unaware of what he actually taught.)

The “already/not yet” view of the Kingdom has some key points to emphasize against Kingdom Now teachings. While not an exhaustive list, this would include emphasizing:

There were many other Latter Rain/Kingdom Now teachings that range from bizarre to heretical, but there isn’t space here to go into it (at the risk of blatant self-promotion, you could always read the book)

A biblical understanding of what the Kingdom of God is about would be a good antidote. As the saying goes, if you know the real thing, the counterfeit becomes obvious.