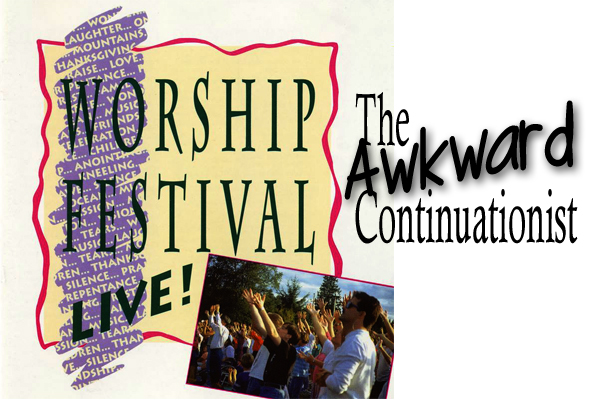 I was there when this album was recorded, oh-so-many years ago. It was not the first time I’d been to something “Vineyard”, but it was the first extended (four day) time of enjoying worship and workshops. It was a “high water mark” in my spiritual journey up to that point.

And yes, it also had a direct connection to getting fired by my church shortly after. But that’s a story best left in the past, where it belongs.

Ironically, my termination confirmed a corollary to something John Wimber had written a few years earlier:

Many [people] were not offended by the theory of divine healing; it was the practice of healing prayer that offended them.” (Power Healing, pg 49, emphasis in original)

The corollary, in this case, was the difference between believing that the gifts of the Spirit were available today, and the practice of them. Long story short: attending the Worship Festival will always be a fond memory in my spiritual life. (I wrote about it here, as well.)

Years earlier, when Wendy and I were dating/engaged, we usually attended a charismatic church near our college because we really enjoyed the lively worship and the joyful zeal of our friends there.

The preaching made us cringe at times, but we were encouraged to know that quite a number in our “college ‘n’ career” group had similar concerns. We invested many hours in local coffeeshops, discussing what we loved about the freshness in the worship, and debating the content of the sermons.

And at one point, Wendy and I voiced The Dream: “Wouldn’t it be great if there was a church that had the exegetical preaching of the evangelicals, and was also open to the charisma of the Spirit?”

In our Bible college, some of our required reading included books like Furnace of Renewal and Those Controversial Gifts by George Mallone, as well as Michael Green’s To Corinth, With Love and I Believe in the Holy Spirit.

These books gave us hope that it might be possible to be evangelical in belief and charismatic in practice, without compromising sound theology or quenching the Spirit. And while I would (and still do) describe myself as evangelical (as per Bebbington’s quadrilateral), there had also been some powerful and unexpected encounters with the Holy Spirit that informed some of our desire to see some kind of “radical middle” between the two.

So in retrospect, the Worship Festival hosted by the Langley Vineyard was just another step in a journey that had begun years earlier.

Being a “continuationist” is almost as awkward as the word itself; the radical middle is hard to find and harder to maintain. Because people.

Bebbington’s Quadrilateral is a helpful (albeit broad) synopsis of evangelicalism. I am not aware of a widely accepted definition of continuationist. I think it would be safe to define it like this: a belief that all of the charisma (gifts of the Holy Spirit) are available today and necessary for the church to function biblically.

And there will be a plethora of caveats and permutations of what that looks like. There is nothing new under the sun. 🙂

Of course, I suppose continuationist could reasonably be called “vague”, because everything from Prosperity (Health & Wealth) on through to Latter Rain (New Apostolic Reformation) would also fit under that banner. It’s not unlike the term evangelical — you have to say “yeah, but which kind?”

Clearly, it’s awkward to call one’s self a continuationist, but at the very least, it has less negative baggage than the term charismatic.

I’d rather avoid turning negative at this point, and saying “well, yes I’m a continuationist but not like (fill in the blank).” It’s better to look at the foundational understanding of the context in which the charisma can function in a healthy, biblical, Spirit-honouring way.

And that foundation would be our understanding of the Kingdom of God.