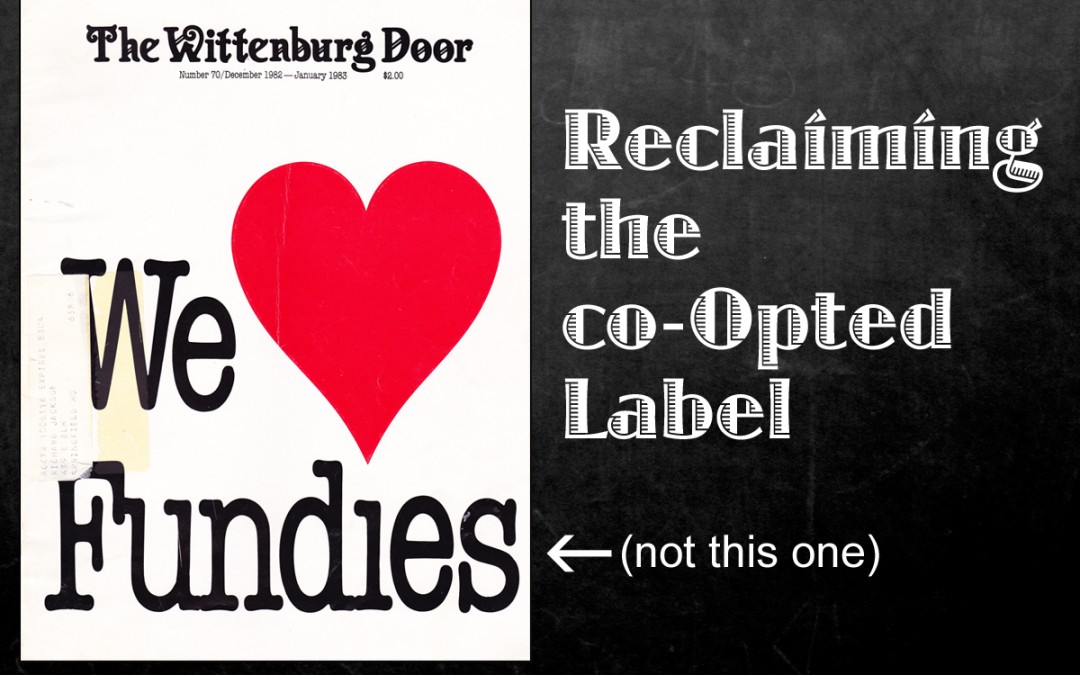 “Historically, fundamentalism was a theological position; only gradually did the movement come to signify a mood and disposition as well. In its early [years] leadership reflected ballast, and less of bombast and battle…

The above quote was originally published almost 60 years ago, in Christianity Today magazine, to delineate the differences between Evangelicalism and Fundamentalism. Both groups shared some key beliefs — primarily the need for conversion by faith in Jesus — but there were some significant cultural differences. The “fightin’ fundies” railed against liberals, culture in general, and each other, while evangelicals were firm in their theological beliefs but more culture-neutral.

Here at ThinkTheology, my colleagues and I have had an ongoing & lively debate over whether or not the label evangelical can be rescued from the caricatures that have been created around it in the past decade or so. I have been an advocate for keeping the term, but after watching the current presidential spectacle south of the 49th parallel (USofA), I am somewhat less optimistic. Here’s why:

As the Wittenburg Door cover at top left suggests, there once was a recognizable difference between fundamentalists and conservative evangelicals, as recently as the 1980s and 1990s. Today — somehow — the fundies have been conflated with the evangelicals, and right-wing fundamentalism (which I’ve written about once or twice) is now labelled ‘evangelical’.

The Wittenburg Door issue pictured above poked fun at Liberty University and its founder Jerry Falwell, and included the satirical application form for Legalism Bible College. The Door (and their readers) knew what a fundamentalist was. And that evangelicalism was not the same thing.

Yet recently, Jerry Falwell Jr. & Liberty have been held forth by the media as examples of ‘evangelical’.

Back in the day, we knew the difference between a fundamentalist and an evangelical. But somebody erased the distinction and lumped everybody under one handy label.

Even some of the pejorative phrases that people love to employ online — ie. “bible-thumping” — which one would normally associate with fundamentalism are now applied to evangelicalism as if they were one and the same.

It is difficult to ‘redeem’ a word that has had its meaning co-opted and brought into disrepute. A recent example of this would be a gathering where I had been invited to lead worship, and also provide a brief testimonial about the value of higher theological education.

Everything went well, and as the meeting was adjourning, the seminary president (guest speaker for the event) shook my hand and thanked me for what I had shared, and for leading worship. He was all smiles and friendliness.

Until that fateful moment when I gave him copies (free!) of The Genesis Cafe (18 months’ worth of research & writing) and Post-Charismatic (over two years of research & writing), while saying something to the effect that I thought he might be interested in the theological writings of one of his former students.

I’ll never forget his reaction. His smile froze, and he stopped shaking my hand. His only comment was, “So… you would consider yourself a… charismatic, then…”

I’d be very surprised if he read either book. I had been labelled, categorized, and deep-sixed by the time he’d finishing making the comment.

I told him that I’d prefer to use the term “continuationist”, and that Post-Charismatic would explain what I meant and why I thought it was important.

I admit that continuationist is an odd term — it’s really just the opposite of ‘cessationist’, which is a familiar term to many — but my hope was that it might, potentially, hopefully spark enough interest that someone would ask what I meant by it.

And then I would have the opportunity to explain — positively — what I believe, instead of having to say “yes, I guess you could call me ‘charismatic’, but not like…” and devolve into the kind of smug anti-statement that my friend Kenny called on the carpet not too long ago.

But the term/label ‘evangelical’… what to do, what to do?