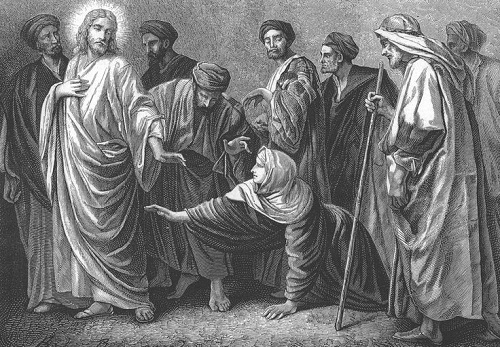 As Jesus exits the boat on the shore of Galilee, he finds a large crowd waiting to greet him. In the crowd is a desperate man named Jairus who has come to beg Jesus to intervene and save his dying twelve-year-old daughter (cf. Mk. 5:42).

22 Then came one of the rulers of the synagogue, Jairus by name, and seeing him, he fell at his feet 23 and implored him earnestly, saying, “My little daughter is at the point of death. Come and lay your hands on her, so that she may be made well and live.” 24 And he went with him.

On the way to see about the girl, another daughter — an older one — slips into the crowd to get close to Jesus. Perhaps he can solve the problem she has been having for the same amount of time the little girl has been alive. Desperation drives her too! But it is a desperation that has been growing for over a decade. Her problem has ruined her life, and robbed her of relationships, money, health, and potential.

25 And there was a woman who had had a discharge of blood for twelve years, 26 and who had suffered much under many physicians, and had spent all that she had, and was no better but rather grew worse.

Twelve years. 4,380 days. 18,250 hours. That’s a long time. For all of this time Jairus has been enjoying being the father of a young girl. Around the same time this girl was born, an unnamed woman discovers that she has a health problem that ultimately moves her to the margins of society. For twelve years the little girl and the older woman are moving through life at the same time; the young girl with all the hopes that a girl of her age and station in life would look forward to (she was the daughter of a prominent family); and the older woman with all the shattered hopes that come with years and years of debilitating illness and the problems that came with it in the days of Jesus (and in Israel in particular). After twelve years, on the shore of the sea of Galilee one day, both of their lives intersect with Jesus at the point of their greatest need.

Notice at least nine similarities between the two stories:

The girl is dying. She needs immediate attention from Jesus. Time is precious to the father. The woman has been sick a long time. Can’t she wait a bit longer? Can’t she see that Jesus is in a hurry? But time (or lost time) is precious to her too. As for Jesus, he is concerned with both of them. Before going to see the little girl, he stops to pay attention to the woman and to deal with her concerns as well.

Hurry Jesus, my daughter needs you. Come and lay hands on her before it’s too late.

Wait, Jesus – I need you too. Let me put my hands on you before it’s too late.

The connection to belief and faith, and the response of Jesus to both (healing and resuscitation) tells us that this is the kind of response Jesus is looking for from disciples.

For the disciple, it is never too late to call on Jesus to intervene. For the one who has had the problem for a very long time, it’s never too late to invite Jesus in to bring healing and restoration. For the one who is faced with the immediacy of a crisis that seems like all hope is lost, it is never too late. Jesus can bring life where there is only every indication that death has taken over. “Don’t be afraid. Only believe.” This is the word from Jesus, and it helps us to understand what he means when, in the very real circumstances of life, Jesus says to us – FOLLOW ME.