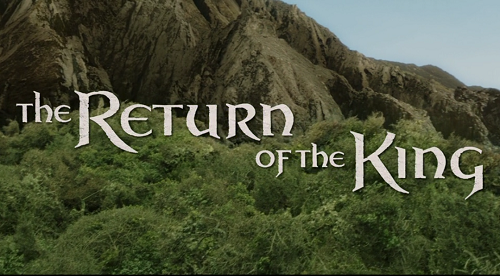 Imagine, if you can, an ancient walled city. It is beautiful and expansive, surrounded on every side by lofty walls with gates to the north, south, east, and west. Imagine watchmen atop the walls, and sentries at the main gates with their entourage of guards to let citizens and well-meaning visitors in, and to keep troublesome elements out.

Imagine a Temple on a high hill at the center of the city, and perhaps a King’s residence near the temple just a little lower in elevation at the highest place in the city.

Imagine that you live in the city, and you know that your King is away with his army. He has been engaged in battle conquest, and word has arrived that he has been victorious. Soon he’ll return home with the spoils of victory, and with his army behind him.

Imagine that the entire city begins, having heard the word of the soon-return of the King, to make ready for his entrance. Every pothole in the road inside and outside the city will be filled in. Every bump in the road will be flattened out. Every crook in the road will be made straight in order to prepare for the entrance of the King. His home-coming will be a grand celebration, and when he returns, you and all your fellow citizens will be caught up together in the joy of it all.

Imagine, finally, that one day a trumpet sound is heard outside the walls of the city. At the horizon of a nearby hill, just at sunrise, the sentry at the gate tower sees the King seated on his horse. His army falls in behind him, and then, as the host comes to a stop, one of the horses breaks off from the formation and begins to ride toward the main gate of the city. A loud trumpet sounds as he nears the gate. It is the King’s messenger. He comes to the gate and shouts with a loud voice — with all the authority of the King himself —

“The entire land is under the jurisdiction of the King. All authority belongs to him. He reigns over all. The Kingdom is his from the north, south, east, and west. Let the whole city now prepare for his royal entrance, and let them all stand before him with fidelity, bowing the knee before him. Sentry – Open wide the gate! The King has returned.”

The sentry asks – “Who is the King? What is his name?”

The answer comes – “The Lord, Strong and Mighty. The Lord, Mighty in Battle — now open the gate that the King of glory may come in.”

Imagine that on hearing this, the sentry announces the return of the King and word of his arrival begins to fan out across the city. Those farthest away from the gate begin to rush toward it with excitement. Those closest to the gate begin to line the streets in anticipation. All of the banners, the flowers, and the food are brought out. All of the dancers, the musicians, and the celebrants begin to rejoice.

Imagine an entourage of nobles and dignitaries, governors, deputies, patrons, and esteemed citizens rushing through the gate together to meet the King up on the hill outside the city. They sing, rejoice, dance, and shout the King’s acclaim as they go out to meet him. When they see him they welcome him and fall in behind his army in regal procession back to the main gate of the city.

Imagine that as he approaches the sound of shouting, celebrating, joy, and jubilation fill the air with praise to the victorious King.  The gate sentry shouts –

“Open the gate wider – Swing it fully open that the King of  Glory may come in.”

Imagine the King crossing the threshold of the gate to an eruption of praise and adulation, citizens paying him homage, bowing their knee to him as he passes by. His army and the entourage of welcoming citizens follow him into the city, up the hill toward the temple where he will go to give praise to God, and then to his palace where he will take his seat upon the throne and rule in justice, presiding over a grateful and loyal people, and reigning over them in righteousness – having put all his enemies under his feet, and having assured their ongoing peace and security by conquering their foes.

1 Thessalonians 4 – 13 But we do not want you to be uninformed, brothers, about those who are asleep, that you may not grieve as others do who have no hope. 14 For since we believe that Jesus died and rose again, even so, through Jesus, God will bring with him those who have fallen asleep. 15 For this we declare to you by a word from the Lord, that we who are alive, who are left until the coming of the Lord, will not precede those who have fallen asleep. 16 For the Lord himself will descend from heaven with a cry of command, with the voice of an archangel, and with the sound of the trumpet of God. And the dead in Christ will rise first. 17 Then we who are alive, who are left, will be caught up together with them in the clouds to meet the Lord in the air, and so we will always be with the Lord. 18 Therefore encourage one another with these words.

The doctrine of “the rapture” is only as biblical as it is faithful to stay connected to the biblical imagery used to describe it. There will never be any secret (or not-so-secret) removal of the church from the Earth with a simultaneous unleashing of hell upon the world’s unbelieving inhabitants.

If we want to embrace the “rapturous” image of celebration depicted in both the psalm and the epistle quoted above, then we’ll have a solid foundation upon which to stand as we anticipate the joy of the Lord’s return. If we use the text in 1 Thessalonians (or any other) to promote the false notion that Christians will be sucked up into the sky at some unknown moment to live with Jesus there, we surely won’t be interpreting the Bible by using the metaphors that the Bible gives us.

A Maranatha Prayer: Even so, come quickly Lord Jesus. And when you come, may we be found ready, eager, and joyfully waiting for your return. The return of the King.

The Gospel is news of what God has done to reach us. It is not advice about what we must do to reach God.