What’s the “therefore” there for in Matthew’s Great Commission? 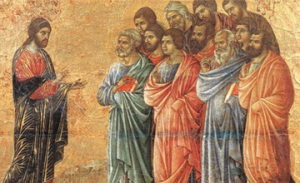 Before we jump in here, just a reminder that there are actually five great commission texts (at least) in the Gospels and Acts. This post is about the one in Matthew’s gospel.

In my post surveying the Greek text of Mat. 28:19-20, I noted that I think Matthew 28:18 is actually a key to understanding the great commission. Here’s what it says…

And Jesus came and said to them, “All authority in heaven and on earth has been given to me.”

The text is then followed by what is typically called “The Great Commission.” It reads…

Go therefore and make disciples of all nations, baptizing them in the name of the Father and of the Son and of the Holy Spirit, teaching them to observe all that I have commanded you. And behold, I am with you always, to the end of the age.

In this scene, Jesus is standing in front of his disciples having been raised from death after three days in a tomb following multiple trials, multiple “not guilty” verdicts, a scourging, and a Roman crucifixion. The death-sentence carried out against him has not only been commuted, but it has been reversed post-mortem by God himself.

According to what Jesus says about this in v. 18, the significance of the resurrection is not something as insipid or as cutesy as – “Well, you can’t keep a good man down!” The significance of the resurrection is this. God has handed over all authority to Jesus as planet earth’s only legitimate King. He has vindicated Jesus as his pleasing son, and put death in its place — in subjection to Jesus. He has refused to allow even death to repudiate Jesus’ claim to be Lord. In the heaven-and-earth creation, Jesus is Lord.

In the simplest of terms, Jesus has told his disciples, “I am in charge of everything now. It’s my world. God has handed it all over to me.” This is the kind of thing a newly-crowned king says. It’s the kind of thing a King says after battle victory to citizens of a newly-conquered land. It is a declaration of sovereignty and the divine right to rule.

And here’s the thing — all of that is followed (in English) by the word “therefore” in Mat. 28:19.  It’s the little Greek word οὖν (meaning therefore, or then, or so then).

When we interpret the meaning and emphasis of the Great Commission in the context of a coronation announcement or a post-victory-and-conquest speech, it takes on a whole new shape. To go even further, it finally makes sense!

What Jesus wants his disciples to see it that he is commissioning them to be his Kingdom heralds.

They are to scour the earth to announce his reign.

They are to initiate people from every kindred, tribe, and tongue into his Kingdom through the sacrament of Baptism. This will be their act of swearing allegiance to Father, Son, and Holy Spirit, and an act of treason against the rule of satan over their lives. Baptism, within a king motif, may be seen as a sacred and public oath of fealty to King Jesus.

Further, these newly-commissioned kingdom-heralds are to instruct people from every nation to obey everything Jesus has commanded. Again, this is “I have taken over the world – tell everyone it is so, and tell them to obey me” language. It is what a King says when he has ascended the throne.

Gospel preachers, then, are those who announce this —

All heaven and earth are under the rule and reign of the crucified, buried, and resurrected God-Man, Jesus. He is God’s anointed King of the whole world. Therefore – swear fealty to God through the sacred oath of baptism, learn his ways, and bow the knee to him in faithful obedience.

This is the simple four-word Gospel that we preach.

That is what is bound up in the word therefore. That’s what it’s there for.