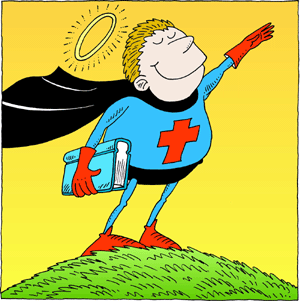 I remember growing up listening to sermons on Revelation 3:15-16: “I know your deeds, that you are neither cold nor hot. I wish you were either one or the other! So because you are lukewarm – neither hot nor cold – I am about to spit you out of my mouth.”
The preacher would usually present this passage as some kind of spiritual spectrum (cold being unspiritual and hot being super, super-spiritual), trying to get nominal Christians off the fence and into revival. It would be presented in such a way that a person needed to make a choice – either you are for God or against him, there is no “in the middle”. Of course, this is very convicting to honest folks, because most of us are aware that we are “lukewarm” when presented with this either-or kind of interpretation. The problem that has always plagued me with the way I grew up hearing this passage taught was that it seemed like God actually liked folks who didn’t really care for him as long as they admitted it. How else does one get around this phrase, “I wish you were either one or the other!”? There is another way to interpret this passage and, to me, it makes much more sense.

Allow me to quickly unpack this verse in another way for you within its geographical context. John, in this passage, is writing to the congregation that gathers in the city of Laodicea, which stood below another city several miles to the northeast sitting on a small mountain called Hierapolis. The city on top of the mountain was famous for its hot, steaming mineral baths. The city of Colossae, about the same distance in the opposite direction from Laodicea, had a cold freshwater spring. Laodicea – between the two cities – had no springs.
Because Laodicea had to pipe its water in via Roman aqueduct from Hot Hierapolis and Cold Colossae, it wound up with water of no real distinction. The remarkable cold fresh waters of Colossae and hot waters of Hierapolis became rather unremarkable at Laodicea.
So what, then, is God saying to the church at Laodicea 2,000 years ago that we should pay attention to today? Be a useful people of distinction for the sake of the Gospel.
Cold fresh water is remarkable and useful. Hot spring water is remarkable and useful. But a mixture of them together is an unremarkable cup of lukewarm uselessness. God is calling Laodicea to make remarkable disciples useful for his kingdom work.
Rather than reading Revelation 3:15-16 as if it is presenting some kind of spiritual spectrum, read it as if it is a call to distinction. Don’t be a confluence of something useless to God. Remember, disciples must be different to make a difference.
“You are the salt of the earth. But if the salt loses its saltiness, how can it be made salty again? It is no longer good for anything, except to be thrown out and trampled underfoot” (Matthew 5:13).