WHAT MARKS MATURITY IN THE CHRISTIAN CHURCH? 1of 3 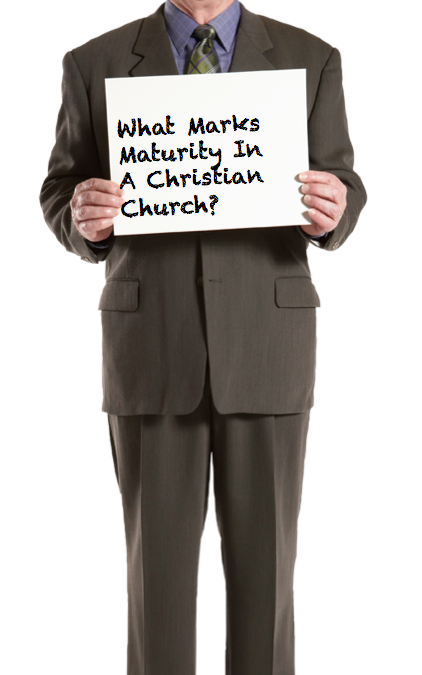 With the exception of those who suffer from some severe form of mental handicap, there is no such thing as a person going in no direction at all. All of us have some lens through which we actively practice viewing the world. We all have some gear with which we drive through or engage with this world.

When people in separate gears, going different directions come together for the sake of the Gospel, you can be certain that at some point they will need to sit down together and examine their goals on a regular basis. This is the first of a three-part series covering what I believe are three important marks of maturity every church should strive for.

My first mark involves unhooking behavioral issues from the Gospel. When we say “Gospel,” this word has traditionally and biblically been defined by seeking answers to three questions: “Who is Jesus?”, “What did Jesus do?” and “What good news is God doing through Jesus?”

We can change the objective word Gospel – or “Good News” – into something it was never meant to be if we mistake what the Good News means for what the Good News produces (sanctification). We need to let the Gospel be the Gospel and avoid spiritualizing it by hooking behavioral imperatives to its pronouncement of pure grace.

There is a great five-dollar word in the dictionary called “transcendental.” It can mean idealistic, lofty, or extravagant. So to transcendentalize an issue means to make it a big deal, to give it prominence. We have a tendency to make common expected worldly issues “Gospel” issues when we hook the issue to the wrong place theologically. We hook issues into the Gospel in order to make them huge deals.

In other words, it’s not enough that something is wrong, but we make the issue so wrong by transcendentalizing in order to make sure the person we disagree with knows that they are not going to heaven because they don’t share “God’s opinion.”

“The word gentleman originally meant… one who had a coat of arms and some landed property.

“But then there came people who said – so rightly, charitably, spiritually, sensitively, so anything but usefully – ‘Ah, but surely the important thing about a gentleman is not the coat of arms and the land, but the behaviour? Surely he is the true gentleman who behaves as a gentleman should? Surely in that sense Edward is far more truly a gentleman than John?’

“They meant well. To be honourable and courteous and brave is of course a far better thing than to have a coat of arms. But it is not the same thing. Worse still, it is not a thing everyone will agree about.

“To call a man ‘a gentleman’ in this new, refined sense, becomes, in fact, not a way of giving information about him, but a way of praising him: to deny that he is ‘a gentleman’ becomes simply a way of insulting him.

“When a word ceases to be a term of description and becomes merely a term of praise, it no longer tells you facts about the object: it only tells you about the speaker’s attitude to that object (a ‘nice’ meal only means a meal the speaker likes) and refined out of its old, coarse, objective sense, means hardly more than a man whom the speaker likes. As a result, gentleman is now a useless word. We had lots of terms of approval already, so it was not needed for that use; on the other hand if anyone (say, in a historical work) wants to use it in its old sense, he cannot do so without explanations. It has been spoiled for that purpose.”

If maturity involves deliberately unhooking behavioral issues from the Gospel, we as the body of Christ would be wise to sit down and ask ourselves, “In what way have we changed the Good News of the Kingdom of God (Luke 4:43) into the good behavioral expectations of the kingdom of God?” Or better yet, “In what ways have we mistaken the “Good News” with the sanctification it produces?

How have we as a church put the cart before the horse?”