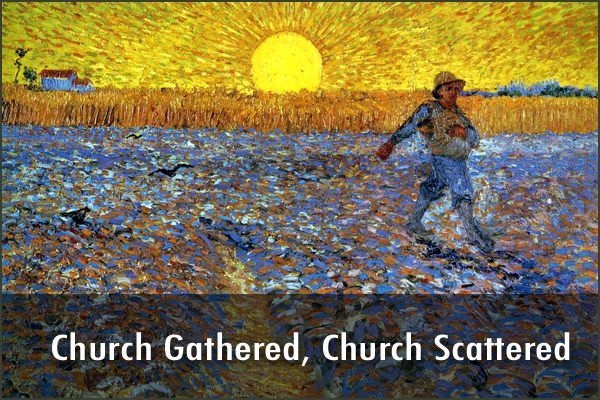 Bob Girard’s Brethren, Hang Loose is almost a half century old. Not exactly what you’d call a current title in the whole missional community emphasis of today.

And yet Girard speaks into our present day, almost prophetically, calling us to think deeply about the difference between the church gathered and the church scattered.

It is fascinating to read that part of the “glorious evangelical status quo” which Girard was reacting to included the idea that church gatherings were for evangelism. In the 1960s church culture where Sunday morning was seen as the prime “soul-winning” meeting, Girard dared to suggest:

“Consequently, nearly every time he goes to church, the average evangelical Christian hears an evangelistic sermon designed to ‘convert the sinner’ (who isn’t there). While, ‘out in the world’, he doesn’t have three friends who are not Christians (a separated people).” (page 80)

A significant change that Girard and the other leaders in his church made was to view “the church gathered” as discipleship, and “the church scattered” as evangelistic. Simply put, they met to be discipled, and evangelism was the overflow of discipled people sharing their lives with their friends, co-workers and neighbours.

What is amazing to consider now, in hindsight, is that within a mere four or five years of Girard writing these words, the whole “seeker-sensitive” movement would begin to develop, essentially training thousands of churches to do exactly the opposite, by making the church gatherings all about evangelism.

Today, those advocating for the concept of the missional community would do well to consider Girard’s words on the church gathered and the church scattered. Many people who are excited about getting ‘outside the four walls of the church’ can — at times — make the idea of missional community their sole raison d’être. There is no “church gathered” in the discipleship sense. For some, the church meets in order to do acts of service in the community, period. Anything else (like discipleship, small groups, etc.) is viewed as self-centred narcissism.

I don’t think I’m over-stating it to note that some missional communities are structured and run as if it’s their mission to “force” people (or at least guilt-trip them) into acting missional.

In contrast to this approach, Girard writes:

“As a pastor, I will wait for the Spirit to ignite the fires of such [missional] service, rather than resort to ‘putting the bite on’. Because when helpful service flows from a heart saying ‘Yes’ to the Spirit, it’s valuable, powerful, effective service.” (page 160)

Girard reminds us yet again that, while we can organize and challenge and inspire and strategize until we are limp with exhaustion, it is the Holy Spirit that produces real change, real life, and real (missional) ministry.

“It is of greater eternal value to have the Spirit doing the work through the few who will let Him do it, than to have many trying to do the Spirit’s work in the energy of the flesh, and then claiming God’s work has been done, when in reality it has been mostly men’s work.” (page 167, emphasis in original)

If the church gathered is effective in discipling, people become accustomed to keeping in step with the Holy Spirit (Galatians 5:25), and the fruit is missional service and spontaneous evangelism when the church scatters.