Toward My Theological Montage: Integrating My Influences 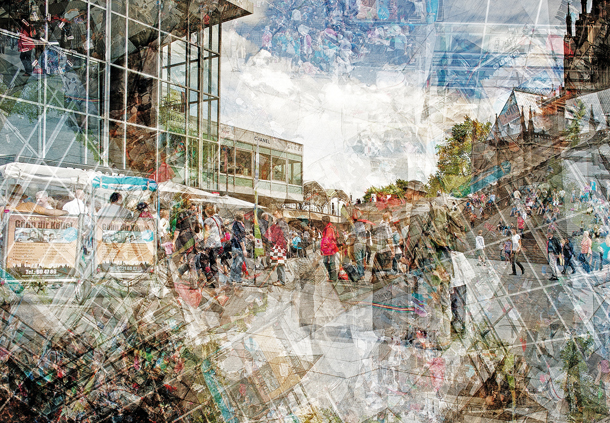 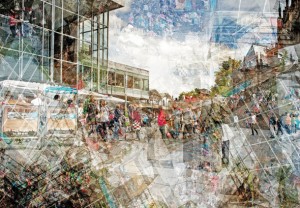 As I’ve been working on my dissertation, which is a constructive theology exploring the idea of a Vineyard sacramental ecclesiology, I’ve been reflecting on the relationship between engaging, integrating, and creating theology. I’m convinced that most constructive theology (or systematics) tends to engage other theologies and traditions, integrate the strengths of those views, and attempt to create something unique. Theologians and denominations have done this throughout church history and while people may nitpick over the nature of how engaging, integrating, and creating takes place, I think we’d all acknowledge that it happens.

This has led me to think about my own personal theological journey, which has produced a very interesting theological montage. A montage is defined as:

“the technique of combining in a single composition pictorial elements from various sources, as parts of different photographs or fragmentsof printing, either to give the illusion that the elements belongedtogether originally or to allow each element to retain its separateidentity as a means of adding interest or meaning to the composition.”

My theological montage is the combination of elements from different sources, which I have integrated into what I consider a reasonable “picture” of biblical theology. I’ve obviously been influenced by John Wimber’s statement to “take the best and go,” encouraged by the concept of finding the strengths of ideas and incorporating them into my understanding(s) of Scripture, theology, and praxis. Or, as the apostle Paul stated in regards to prophecy, I’m encouraged to “hold fast what is good” (1 Thess. 5:21).

If postmodern epistemic deconstruction has anything to offer us (and I think it does), one of the helpful issues raised is the acknowledgment of presuppositions and agendas. Everyone has their own agendas and influences, even the people who think they are just “taking the Bible literally.” They have presuppositions that shape the way they understand the Bible to be literal, as well as certain cultural influences that shape they way that they read texts. This is true for everyone, especially those who deny it (see Anthony Thiselton’s The Two Horizons or Hermeneutics for helpful discussions on the role of presuppositions and the relationship between the “horizons” of influence).

So I’m convinced that being aware of, knowing, and understanding our presuppositions and influences is vitally important when we’re “doing theology.” What assumptions do we make of Scripture? Why do we read making the assumptions that we do? How does our own cultural context influence the way that we understand the biblical context?

So what has influenced my own personal theological montage? I’ve identified a number and, for the sake of conversation and because it’s somewhat fun to reflect on these things, I offer the following:

First, I’ve been massively influenced by two traditions: Evangelicalism and the Charismatic movement. When I first read David Bebbington and was confronted with his description of Evangelicalism via the “Bebbington Quadrilateral,” I was somewhat hooked. While I’m no longer convinced that “evangelicalism” is always a helpful description, the qualities that Bebbington identified are still qualities I share. Moreover, the continuing work of the Holy Spirit through the “empowerments” (spiritual gifts) is foundational for me. Of course, I should qualify these two influences by saying that, once again, I “take the best and go.” Not all who identify as Evangelicals or Charismatics represent the type of evangelicalism or charismatics that I find influential. Yet those two traditions have had huge influence in my life.

Third, the Reformation and the broad Reformed tradition shape my theology, though that is chastened by my love and appreciation for Charles and John Wesley and their relationship with George Whitefield. Don’t get me wrong here, I love much of John Calvin’s Institutes and hold to what would likely be a much more Calvinistic approach to soteriology than an Arminian perspective, I do not center my theological identity on Reformed theology or the Reformers. That is to say that (a) I believe there were “regenerated” followers of Jesus within the “corrupt church” of the middle ages prior to the fifteenth century, (b) it’s okay to work with and acknowledge Arminians as valid Christians, (c) the Reformed tradition is much more broad than “five points of Calvinism” (see James K. A. Smith’s Letters to a Young Calvinist). Furthermore, the center of my theology is not predestination; rather, it is king and kingdom. Of course, while I find elements of Catholic theology helpful, I’m decidedly Protestant in my own ecclesial leanings.

Fourth, I am not a (F)undamentalist. I mean, I am not even remotely close to being a (F)undamentalist. Sure, I share some of the same Evangelical concerns (see Four Views on the Spectrum of Evangelicalism for a good discussion on Fundamentalism and Evangelicalism). The arguments that drinking alcohol in moderation is sin, men should have short hair and women long hair, the King James Version of the Bible is the only legit English translation, and a host of other concerns that (F)undamentalists share are not shared by me. This shapes my theology and praxis, for obvious reasons.

Fifth, I am ecumenical. I think there are many things we can learn from each other and though I have some strong disagreements with some of the views espoused from some theologians and traditions, I acknowledge that there are definitely views that I hold that, under the scrutiny of God, will be found wanting.