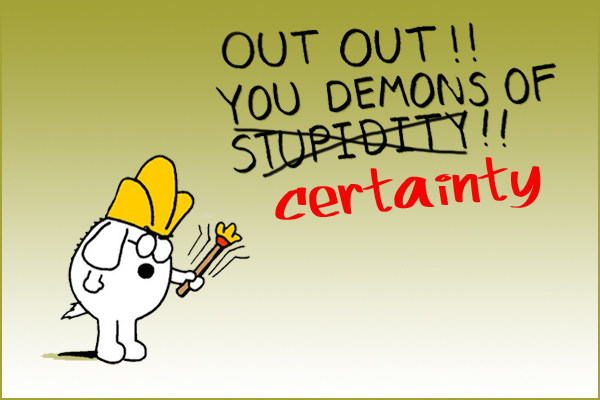 There is a logical fallacy known as the False Cause, which LogicalFallacies defines as:

“Presuming that a real or perceived relationship between things means that one is the cause of the other.

“Many people confuse correlation (things happen near each other) for causation (one thing caused the other).”

It is becoming quite popular today, if you visit various Christian websites/blogs or see random quotes in your BookFace feed, to find comments that reinforce the following diagnosis:

And, of course, since no follower of Jesus wants to be known as an arrogant know-it-all, therefore certainty in matters of faith must be rejected.

And many of us have, at some point in our journey, actually met some arrogant know-it-alls. And some of them have even been Christians. We weren’t comfortable around them, and we certainly don’t want to be them. And so the False Cause Fallacy can be surreptitiously planted into our thinking.

Aye, but here’s the rub… (actually, there are several)

By all means, let’s flee pride and arrogance. God has no use for it (Proverbs 6:16-19) and actively opposes people who live in it (James 4:6)

But don’t buy into the logical fallacy lie that says holding your faith with certainty = arrogance. You can be humble, and confident in your faith, all at the same time.