The Best Intro to Kingdom Theology…

Enter Robby McAlpine’s The Genesis Cafe: Conversations on the Kingdom.

This review is a long time coming (just ask Robby!). I had the immense privilege of reading an advance copy of the book and count that as a huge honor. Plus, I consider Robby a friend and you’ll likely notice he is now a contributor here at ThinkTheology.org too. Robby is a worship pastor, theologian, missionary, author, father, and husband… plus he’s a really great guy, despite being from the enemy of all USA hockey – Canada. So let’s get started looking at what I consider to be the best introduction to the kingdom of God that you could give to your friends, family, and church members. 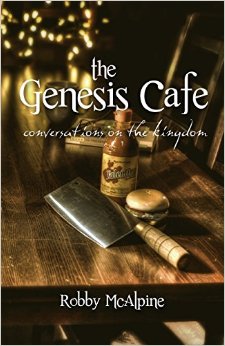 The Genesis Cafe is written so well that I literally (not figuratively) read the entire book in one sitting. The reason why this book is so engaging is because Robby employs a genius literary move: he records discussions he has with two characters, the Elder and the Younger. For those of you who have read Robby’s Detoxing from Church, you’ll recognize these two characters. This literary strategy works very well for what Robby’s trying to do because the conversations between these characters are so engaging and very rich. In fact, non-theologically oriented readers will find that theology is actually interesting. And important. And understandable.

This fantastic book is based upon the theology of George Eldon Ladd, one of the most influential biblical scholars of the 20th century. Ladd’s the dude when it comes to understanding Inaugurated Eschatology, the “now and not yet” perspective on the Kingdom. Thus, the conversations lead to Robby, the Elder, and the Younger all acknowledging that:

“The Kingdom was all about the rule and reign of God, the King of heaven and earth.”

Robby’s conversations with these two characters dive into all that Ladd articulated, yet the conversations are understandable, entertaining, and full of witty discipleship examples. What I mean by this is that throughout The Genesis Cafe, the discussions provide great examples of how a group of Jesus followers can help encourage each other, teach each other, and grow together. I found myself often dreaming about how I could apply what was happening in these fictional conversations in the conversations that I was having with people in my life.

And this is why The Genesis Cafe is the best introduction to the kingdom of God for people new to the subject. If you give them a copy of Ladd, they will struggle to understand Ladd because his work is that of a top-notch scholar who, as we’ve discussed elsewhere, rehabilitated evangelical scholarship. Ladd is a heavy weight, but his topic is extremely important, especially for us in the Vineyard. Kingdom theology is foundational to what we do and how we do it!

For these reasons, I can’t think of a better introduction to the subject than Robby McAlpine’s The Genesis Cafe.

“I know this should be obvious, but in all the discussions I’ve had with friends about justice, ethics, culture, and faith… Well, to be brutally honest, somehow we overlooked the whole ‘kingdoms in conflict’ aspect of the Kingdom. It’s as if we forgot that we’re in a spiritual battle . At times, I wonder if – unintentionally, of course – we’ve only succeeded in bringing the Kingdom down to our level, where we can manage it ourselves.”

The Genesis Cafe is, quite frankly, a work of art. I’m not just saying that because I consider Robby a friend either. When I read it, we were simply acquaintances. Few books can unpack such deep theological concepts in such readable and practical ways. And I don’t believe that I’m exaggerating when I say that I’ve read just about every book on the Kingdom of God that I can get my hands on. Many of them have had an immense influence upon shaping my theology and praxis. The Genesis Cafe is, in my estimation, the best basic articulation of the theology of the kingdom (via Ladd) and explanation upon the practical applications that this kingdom theology demands.

So I plan to continue recommending The Genesis Cafe to anyone interested in learning more about the kingdom of God. I also plan on using this as a resource for small groups. In addition to an enjoyable read, The Genesis Cafe‘s eleven chapters each end with questions for further conversation, all of which will be excellent for small groups!

Finally, for those over-achievers who are interested in more “extra credit” for study, Robby has some great appendices that cover the content of kingdom preaching in the NT, the miracles, and much more.

All in all, The Genesis Cafe is fantastic. Pastors should recommend this as an excellent resource and I’d encourage you to pick up a copy today! Were I to write a Top 10 Books on the Kingdom of God (as opposed to my previous top 5, Robby’s book would certainly make the cut!).