A Farewell to Fire Insurance Theology 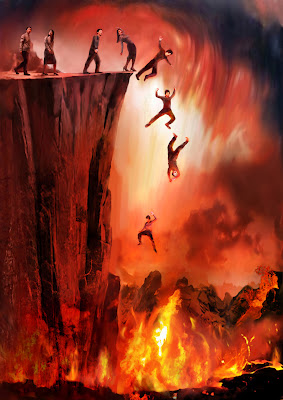 That’s right! I’m calling for an end to Fire Insurance theology as the central thesis of Evangelicalism! Or at least the out-of-balance, singular emphasis 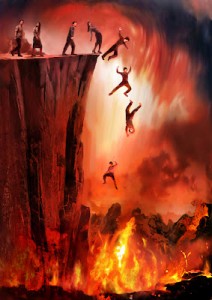 on “soul-winning” – especially at the expense of discipleship. Another way to talk about this is the idea of “Lordship salvation.” Brad – do you hold to Lordship salvation? The idea that you must receive Jesus as both Savior and Lord. The opposing idea is that one can receive Jesus as Savior without “accepting” Him as Lord. Truth be told (IMHO) the idea of separating these two is preposterous! The two ideas are inextricably linked in scripture. We don’t see Jesus going from town-to-town in the gospels asking people if they want to receive Him as their savior. In a quick concordance search of the gospels I found 19 occurrences of Jesus’ exhorting His disciples to “Follow me.” To be His disciple means to follow Him. That’s what disciples do! They are diligent learners (mathetes), who study the Master’s every move, mannerism, teaching, manner of speaking, how He treats people, His ethics; and then imitate their Rabbi’s every word and behavior. This is what it meant to be the disciple of a Rabbi in 1st century Palestine’s 2nd temple Judaism!

Evangelicalism’s obsession with conversion-ism dates back to the Great Awakening of Jonathan Edwards & George Whitefield, was carried on by Dwight L. Moody and the Billy Graham Evangelistic Crusades, and continues today with Greg Laurie’s Harvest Crusades. It goes on in many Evangelical Churches today which have a “get ’em in, get ’em saved, and move on to go get some more and get them saved too” mentality! To use Scot McKnight’s language: this obsession with “decision-ism” is rooted in a failure to properly differentiate between “the plan of salvation” (Jesus died for your sins, so you should receive Him as your personal Lord & Savior) and the (gospel) good news of the kingdom of God (the Kingdom of God is here now, present in the person, life, work and ministry of Jesus Christ)!

We have become so obsessed with saving souls from hell that we have forgotten about the Great Commission to “Go and make disciples” [NOTE: the great commission is not to go and make converts from one (or none) religion to Christianity]. Indeed we have even distorted the meaning of the word evangelism. Be honest: when most of us hear the word ‘evangelism’ we think of making converts to Christianity, getting people to receive/decide/accept Jesus as their Savior, come into a personal relationship with Jesus, pray the sinners prayer of repentance, sign on the dotted line at the back of the Gideon’s Bible, come up for an altar call, etc. But face it, the english noun evangelism comes from the greek root euangelion – i.e. to proclaim good news! An evangelist is one who proclaims good news, not one who argues people into the kingdom of God! This is what Jesus did in His ministry on earth: “he went on through cities and villages, proclaiming and bringing the good news of the kingdom of God.” I love the way the ESV translates euangelizomenos the verb (present participle) here in Luke 8:1.

Returning to the problem at hand, the separation of salvation from being a disciple of Jesus: we end up with a lot of people who glom onto this idea that I received Jesus as my Savior at summer camp when I was 8 years old so, me & God, we’re OK, right? – I’ll go to heaven when I die! They may have absolutely no interest or intention in following Jesus, or in being His disciple. They have “bought” their free fire insurance policy, their “get out of hell free” card, so why worry much about any of the rest of it? And for much of the evangelical church, this is exactly what we’re “selling” them.

So yes, it’s time to for an end to Fire Insurance pop theology in Evangelicalism! It’s time to get on with the (Great Commission) business of making and sending disciples, who in turn make more disciples. No wonder our churches are filled with so many nominal Christians who have “received Jesus” but their lives are utterly untransformed! Because they are not following Jesus!