Remembering My Dad and the Spirit of Adoption

This will be a very personal post with some important reflection on the biblical idea that God himself adopts us as his own children. 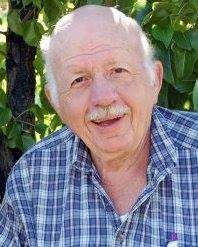 Today marks the one year anniversary of my dad’s death. It was on this morning, one year ago, at around 7:30 that my phone rang, and my brother’s caller-ID popped up. My brother texts me, so I knew this was an important call — and it was. I said, “Hello,” and the first words my brother said were, “Ken, are you sitting down?”

I knew that he was calling about my dad. I was right. He told me that my dad died very early in the morning. In that moment, I instantly morphed into an eight year old boy who was talking to his little brother, and I burst into tears. I have never known what it means to be in the world without my dad. My eyes burn with tears even today as I remember him, and as I think about not being able to call him or talk to him now that he is gone.

This morning, as I woke up remembering what day it was, a scene from a conversation I had with my dad in July of 2005 flooded my memory.  Here’s the back-story… 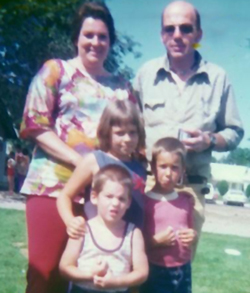 My parents, like my wife and I, were married for many years and tried often to have their own biological children without success. So, they adopted my sister. Then, two  years later, they adopted me. They were the kind of people who had love to give, and rather than giving up on sharing that love with their own flesh and blood, they embraced the idea that they could love children who did not come from them — and that they could love them as their own flesh and blood.  When I was about four years old, my parents announced that they would at last have a child, and my brother was born.

My parents never hid the fact that I was adopted from me. It was a common practice among adoptive parents to keep that fact from their children at that time, but my parents thought I had a right to know everything about myself — so “adoption” was one of the first words I learned.

The fact that I knew there were other people out there who were my biological parents fueled early questions about rejection, as well as doubts that my mom and dad could love me as much as they loved my brother. How was it possible to love the child of another person as much as you love your own flesh and blood? I doubted the possibility for more than 30 years.

When I was growing up, I would insist that my parents did not love me quite as much as they loved my brother. I think it really 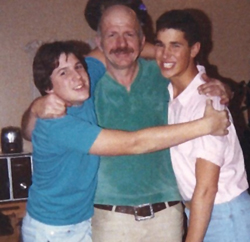 deeply hurt them when I voiced these things. They begged me to think differently, and always said – “We love you all just the same. It’s impossible to explain, but it’s true even if you never believe it.”

And, as I said, I never quite believed it for over 30 years.

When MaryJo and I were first married we talked about adoption and I had a very negative and hurtful reaction. “God’s will is not for us to have kids and then give them up for someone else to raise” – I said to my poor wife.  She said, “God uses adoption to set the lonely in families, and he adopts us too.”  She was always better at theology than me!  But still, I was not open to the idea of adoption for the first 13 years of our marriage.

One day, in 2003, I was sitting in my living room and I started praying out loud… “God, look at everything I have. Look at this house. Look at my wife. Look at my life. I have everything. I am full. I am healthy. I am stable. I have so much to give. Why don’t I have children?”  In the silence after I stopped talking, I was taken back to the conversation I had with my wife 13 years earlier —  when I rejected the idea of adoption, and I knew that God was giving me the answer. 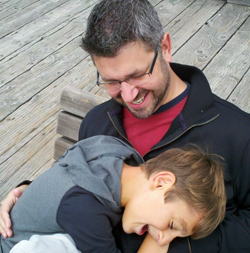 In 2005, my wife and I travelled to Ukraine for 30 days and we adopted our son Victor.  I remember the first day I laid eyes on him, picked him up, sat him on my lap, and connected to him.  Something happened in my heart.  To put it into words, what happened is he became my son… in my heart.

That is, I embraced him into the relationship of “son” even though he did not come from my body.  I set my love on him, and I gave it to him as I would give my own child. It happened. There was no other way to describe it.

If someone had suggested that he was not my son they would not have liked the response! There was (and is) nothing in my own heart that gives rise to any doubt that Victor is my son — despite the fact that we are not biologically related. He is my son because of the amazing idea and reality of adoption.

When we came home from Ukraine, I invited my parents to fly to California to spend a couple of weeks with us so that they could bond with their new grandson.  I took my dad into the back yard so that he could smoke his pipe, and so that I could show him the new playground that some of our friends built for Victor while we were away.  He was just standing there smiling, smoking his pipe, watching me push my son on the swing.

After about five minutes of silently watching us, my dad slowly walked around to where I was standing and put his arm around me. He took his pipe out of his mouth, and his eyes filled up with tears as he tried to get the words out…

I just stood there.

“You understand, right? He asked one more time.

My dad just gave me a hug, put his pipe back in his mouth, and walked back over to where he was standing before and kept watching me play with my son.

I knew that his question was pointed right at all those arguments we had when I was growing up when I pleaded with him to admit that there was no way he loved me as much as my brother.  My dad never let me win. He always said, “I love you just as much as your brother. Some day I hope you understand.”

Thank you, dad! I love you and I miss you.