Back to Church – An Ecclesial Journey, Pt. 5 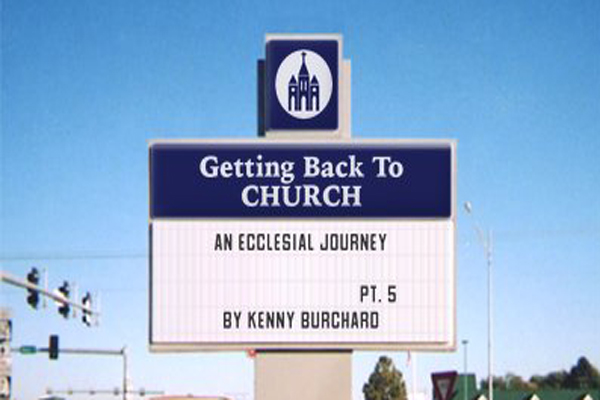 Let’s start with a story…

This morning my wife and I joined in fellowship and worship with a fairly large group of about 250 Anglican Christians in our town. After we were greeted at the door by the Pastor, he said –

“I just want to let you know that our deacon’s wife died last night after a long battle with cancer. So, there is a lot that will happen in worship today that will center on our shared sense of loss about that. I just wanted you to know since you’re guests and may wonder what’s going on.”

We expressed our gratefulness about the inside-information, and our condolences. In our minds, that was something a family would do – so it seemed perfectly normal. Then he asked, “Are you familiar with the Anglican tradition and our fellowship in particular?” I told him that I had been looking closely at the Anglican tradition, but I didn’t know about that fellowship in particular. He put his hand on my shoulder and said, “Well, we’re pretty spirit-filled compared to what you might see elsewhere. We identify ourselves as a ‘three-streams’ fellowship. Are you familiar with that?”

I told him I had not heard the terminology of “three streams.” He said…

I told him that all of that resonated with me, and it was (without knowing the terminology) something that had attracted me to things I see happening in some corners of the Anglican tradition.

We went into the gathering place with the rest of the congregation and after a few songs and some scripture readings, the pastor invited the dear man whose wife had died to come and share with the congregation.  My wife described his words as “a love story,” and “a family story.”  While the deacon was talking, he made a statement about the first time he had ever attended a gathering there. What he said in that statement so resonated with me in terms of my convictions about what it means to be ekklēsia.

Read it carefully. He said…

I’m not sure what the next few phrases were because I was so encouraged that I kept replaying that phrase in my mind over and over, and I leaned over to my wife and said, “Did you hear how he just talked about his understanding of what this is?”  She nodded.

Returning to and digging into the meaning of ekklēsia

The deacon gave, in one of the most natural, normal, and fluid ways I’ve ever heard it expressed, a robust and biblical understanding of what is meant by ekklēsia.

His words were a powerful reminder to me of what ekklēsia is meant to be.  Bound up in his reflections are actually definitions of two words from the last post in the correspondence from Tim Geddert. Those are the words –

Remember that Geddert pointed out the two words that make up ekklēsia (ek – which means out, and kaleo which means called). Thus, “those who have been called out” is a primary emphasis of the word. But contextually, those who are called out are called to come back together into one place to do their collaborative work. Thus, they come out of their own places and into their together-place where they do the business of the entire group.

That leads to the second word synagogue. Geddert reminded us that the word is based on sun – which means ‘with’ and ago which means ‘to lead.’ The word is often used with the idea of leading another person to a particular place with some level of force or by compusion – such as to arrest them and take them to court. The person on the receiving end of ago has been brought there by someone else under some level of compulsion and guidance. Putting the word sun (with) at the beginning gives the word a coporate meaning such as “All together, and with one another, we have been brought by a power outside ourselves to this place.” That is the kind of texture needed to understand a bit more what is meant by synagogue.

Putting the two words together as an interpretive pair fits perfectly with what the grieiving deacon said about his belieiving Christian family.

“You people who God has called and brought together to this place to worship his name and make his name known.”

Okay. So far in this post, I have not used a certain word even one time. Can you guess which word that is?

One word (not even close to the best one) has taken over… we need more words!

I am personally committed to expanding my ecclesial vocabulary to include the wider range of biblical ideas. The word “church” which isn’t even close to the best way to translate ekklēsia has simply taken over almost every aspect of how we talk about it, and that is, I’m convinced, part of the reason why we have such shallow ecclesiology. I told my wife that one of my goals in this post was to write the entire first section without using the word church one time. Mission accomplished – and you still knew what I was talking about right?

Consider the ways in which the word church is conflated with almost every aspect of ecclesial life, experience, and discussion.

Some congregations and movements and denominations have actually tried to embed a deeper meaning of ekklēsia into the way they actually name themselves. For instance –

There are hundreds like this online. Each of them attempts to capture the meaning of either ekklēsia or synagogue, or both. My personal favorite as a way of describing what ekklēsia and synagogue actually mean is “Missional Communies.” Assemblies of God emphasizes the gathering and assembling aspect of ekklēsia but is not centered on the missional dimension of the word (e.g. that God is calling the assembly together through his missionary people). But others do a great job of connecting the big ideas of gathering and going or of meeting and mission such as Missionary Fellowship or Faith Family Outreach Center.

In my opinion, congregations, denominations, or movements that are so named are giving themselves a tool that is embedded into their very identies that can help them to remember who and what they are.

The people of God – called out of every nation to be God’s people, gathered together to be a dwelling place of God’s Spirit, and sent together to gather even more of those who are also being called. Here is where BEING and DOING overlap.

BEING – (since) We are the called and gathered assembly of God sent into the world.

DOING – (therefore) We gather and we go.

Now that you have my own outline of my convictions about what it means to be the Church at this phase of my own ecclesial journey – I want to do one more post consisting of my own answers to or interaction with your questions or input. If you are able, please leave a comment below in the next couple of days, or post a question. I’ll put those together in a final post.

Mere heathen morality, and not Jesus Christ, is preached in most of our churches.