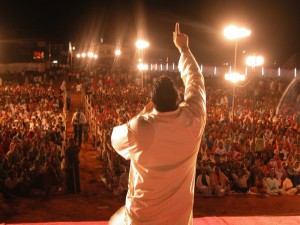 Recently I had a conversation with a young and newly minted pastor who was asking me some questions about preaching. We spent some time talking about different homiletic principles and I recall that one of the last things that she said was, “I want to preach like the apostles.” Despite the fact that some of the apostolic preaching led to apostolic death, I found myself in agreement with the desire to preach with the same type of power, conviction, and effectiveness (to be faithful to the biblical witness, I think it should be noted that not all apostolic preaching led to “revival” or “acceptance”; cf. Acts 7:54-60).

I tend to use the term as a way of talking about how the apostles appear to have functioned, acknowledging that in some cases they had unity in their perspective and at other times had diversity in methodology or approach.

So what does it mean to preach like the apostles? I have a couple of thoughts on that, but I want to take a minute and note that I think there is a difference between preaching and teaching. I think these two types of proclamation can occur within the same sermon and that the Church benefits from both preachers and teachers. D. Martyn Lloyd-Jones said that “preaching is theology coming through a man who is on fire” and the prophetic voice of Jeremiah noted that if he were required to not speak of the Lord, “there is in my heart as it were a burning fire shut up in my bones, and I am weary with holding it in, and I cannot”(Jer. 20:9).

Yet the question remains, what does it mean to preach like the apostles?

First, to preach like the apostles is to preach biblical theology. All the recorded sermons in the Book of Acts display the apostles handling the metanarrative of God’s historical work. When Stephen stands, in Acts 7, to testify before the council of Jewish leaders, his sermon remarkably tells the story of Israel. Starting with Abraham, Stephen tells how God worked through Isaac, Jacob, Moses, David, Solomon and the Old Testament prophets. The sermons in Acts are sermons that connect salvation-historical dots, seeing and telling the story of God. The apostles were “big picture” preachers doing, homiletically, biblical theology. What is biblical theology?

“When we talk about biblical theology, we mean a theology that not only tries to systematically understand what the Bible teaches, but to do so in the context of the Bible’s own progressively revealed and progressively developing storyline. Faithful biblical theology attempts to demonstrate what systematic theology assumes: that the Scriptures are not an eclectic, chaotic, and seemingly contradictory collection of religious writings, but rather a single story, a unified narrative that conveys a coherent and consistent message. Thus biblical theology is concerned not just with the moral of the story, but the telling of the story, and how the very nature of its telling, its unfolding, shapes our understanding of its point.” (Michael Lawrence, Biblical Theology in the Life of the Church: A Guide for Ministry, 26)

Second, to preach like the apostles is to preach christological and christocentric. All preachers can take a que from Karl Barth here. Kymlyn J. Bender states, “for Barth, to consider and formulate a Christian doctrine in isolation from the revelation given in Christ results in an abstract doctrine that has lost its moorings and can be regarded only as speculative.” When the apostles preached, they preached Jesus (cf. Acts 8:12; 9:20, 27; 10:34-36; 28:31). All of God’s activity points to Jesus and culminates with Jesus.

I enjoyed Kenny Burchard’s article on why preachers should do expository sermons even though the Bible doesn’t explicitly command it. I think it has a lot of wisdom. I do, however, wonder if we need to really reframe the way that we do expository sermons to situate our work in the specific text we are preaching from in a way that connects with the broader redemptive work found in biblical theology. How does Ephesians 1 fit with the grand story? Much of what passes for “expository sermons” tends to simply be running commentary on exegetical observations with no eye for the larger metanarrative of redemption.