When “apostasy” can be a good thing… 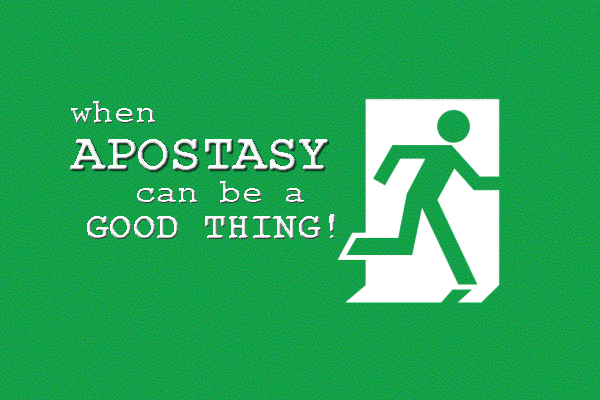 Okay, this is going to be a rather unrefined post that fits under the category of “thinking out loud as the thoughts emerge,” but I want to do it anyway (read the second and third sentences here). Stay with me.

A bit of background – Two Case-Studies

Case-Study #1: In the summer of 2001, one of my family members developed a life-threatening disease that nearly took her life. She went through months and months of intense treatment, spent her savings (and more) on radical therapies, and shriveled down to little more than skin and bones with almost no hair until she began to turn around and recover.  That was 14 years ago. I had a nice email exchange with her at the beginning of May, and she’s doing great. In the treatment process and in the year or two that followed, she expressed to me that she had lost her faith, and wondered why God let her go through all that. Everything she knew was true, everything she believed, an everything she had been told was all… wrong! She said, “I can’t pray. I don’t know who I’m praying to. I don’t even know if he hears me. I give up.”  She explained it as a crisis of faith, and even said, “I feel like I’m falling away from God.”

Case Study #2: In 1999, a talented young man began coming to the church where I worked, and eventually came onto our youth leadership staff to serve and grow as an apprentice pastor. He was “on fire,” energetic, thoughtful, and very effective in relating to the kids. He had been through his own pain, and when he was a bit younger, someone had helped him to become a Christian. From all appearances he was destined to be a leader in the Church. When we ventured out to start a church plant, he came with us and was our youth pastor for the first year. A few months after we launched, he left our staff, left our church, left the area, and left his faith. I read later on a social media site that he had lost his faith in an “interventionist God.” He had prayed and sought God about something very important to him, and things didn’t go as he wished they would — so he concluded that the God talked about in the Bible was not truly accessible to him. After all, the things happening in the lives of people in the pages of Scripture were not happening in his own life. So, he fell away. He apostatized. He now claims to be a taoist, but is not hostile to Christianity. He simply makes not claim to be a Christian himself.

The general meaning of apostasy

Before I talk more about these two dear people, and why I think what happened to them was, in many ways, a mixture of good and bad things, I want to look a little closer at the meaning of apostasy in the Bible.

The word itself is ἀφίστημι (aphistemi) which is used in 1 Tim. 4:1 as a future indicative verb (which means it’s translated “will fall away” — ἀποστήσονταί/apostesontai). Here’s what the TDNT says about the word in the introductory discussion of it’s broad definition:

Trans[lated]. “to remove,” either spatially or from the context of a state or relationship…or from fellowship with a person == “to seduce,” “to win away” from someone, ether privately or politically. Hence also the intrans. sense “to remove oneself,” “to resign,” “to desist,” “to fall away. [1]

Here are a few other texts for you to hover over to see how/when the idea is used in both the Old and New Testaments:

The word is not always used to convey departure from God, though when departure from God is being discussed, it seems to be a favorite word. In some places, it is used to discuss leaving one thing, and going on to something else. In the broadest sense, aphistemi means “to resign,” or “to go away,” or “to depart.”

Now, back to my family member and my friend…

Falling away from THE faith, or your own version of faith?

I’ll say here that I’m not advocating for anyone to reject their faith in Jesus Christ, or (to use Old Testament language) to rebel against God and forsake Him. However, at this point in my journey with God and His people, I have a seen a lot of what passes for faith that is — when you really bore into it — the embrace of an overly-simplistic caricature of Jesus and biblical faith, and immersion into some version of a Christian subculture complete with friends, activities, religious experiences, and a real sense of belonging. These things pretend to be real faith in the real God, and sometimes they feel like real faith, but they’re not.

If a person has collected a set of unbiblical beliefs, and culturally attached him/herself to the Church, it is possible over time to have those ideas re-shaped by discipleship, teaching, and mentoring. In other cases, crisis and reality will wrap themselves around a person and squeeze the illusion out of them until they become… disillusioned. They will often lose their unbiblical and deficient faith, but all is not lost. In fact, what may actually be lost is something that is keeping them from seeing God as he really is. The Old Testament image of this is the smashing of idols!

In the case of my family member who got sick, over the course of time she worked through her faith and discovered a pretty long list of things that she had superimposed over a Biblical view of God, and layer-by-layer, she has been in a long process of peeling those things away. She prays and she believes, but she is a lot more careful about some of her previous conclusions. Her faith has been refined by fire, and she has departed (apostatized!) from an unbiblical, and ultimately un-true version of faith.  I think all of us do and must experience this if we are going to be mature in our faith.

In the case of my friend, he and I actually met recently for a meal after years of not seeing one another, and as we were catching up he said to me… “I am not saying I don’t believe in God. That’s an unsustainable position. I’m just saying I have no idea who God is, and I don’t understand the Bible’s depiction of God.”

I am personally glad that he lost that deficient version of faith he once had. When I listened to him recount his understanding of the Bible and the Gospel, I knew in my head and heart that he never really understood it, and that was the problem.

I think this scenario is more common than most of us even realize, and because we’re blind to it, we assume the worst about some of our friends when they leave that version of faith and seem to fall away from God. What may be happening, in many cases, is that they are falling away from a version of God and religion that is truly of no value. Perhaps in your own circle of friends you’re thinking of someone right now where this is likely the case, and that person could use a call from you, and some hang-time where you just listen. In the meantime, may we all…

anything pretending to be faith that is not true faith.

Have you ever had a crisis of faith like the two people I described (or have you seen this happen)?

How did you or the people you know work throughout it?

Jump in below and join the conversation.