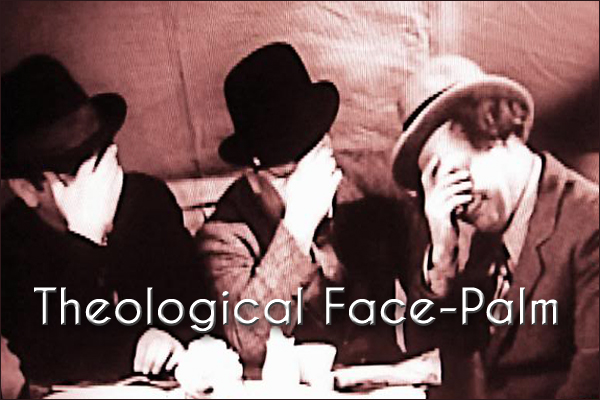 Somebody recently posted a link to an intriguing article from the online version of Charisma: Remembering the Latter Rain. I’m not sure how recent the article is, but it’s fascinating — in a train-wreck sort of way.

It’s amazing to me — a face-palm moment, if you will — that long after the Latter Rain movement was rejected as unbiblical (waaaay back in 1949), that it just keeps showing up again and again. This is a bizarre group that just will not go away.

What makes this so intriguing is that I seriously doubt the majority of people who are currently promoting the Latter Rain movement have any clue about what the Latter Rain was all about. For example, the article linked above even spoke glowingly of William Branham as a key influence in the Latter Rain.

One of William Branham’s most famous teachings was the “Serpent Seed”, where he claimed that the Genesis 3 account of the Fall of Man had nothing to do with Adam & Eve eating the forbidden fruit. Instead, Branham taught that the ‘original sin’ was that Eve had sex with Satan. And got pregnant, giving birth to Cain, who was born of this “satanic seed”. Conversely, Abel (and later Seth) was born to Eve via her real husband, Adam, which meant that Abel & Seth (and their descendants) carried “godly seed” because Adam was created by God.

And throughout history (taught Branham), we see children from the godly seed (Abraham, Isaac, Jacob, King David, Jesus), and the offspring of the satanic seed (Ishmael, Esau, King Saul, and the Anti-Christ).

(Perhaps not surprisingly, Branham also suggested many times that pastors and leaders with theological training were from Satan’s lineage. Same goes for denominations — God hates ’em and always has.)

Branham had several other theological face-palm teachings that would take too long to detail here, but the Serpent Seed stands out as why his influence on the Latter Rain should raise red flags, not accolades.

What is even more amazing — from a theological face-palming perspective — is the kind of arguments people will throw at you to justify the legitimacy of the Latter Rain. I’m surprised how often I hear: “Well, there were miraculous healings, so obviously God isn’t too worried about their theology!”

Which, being translated, means: “Anything you say can and will be dismissed as irrelevant. Miracles prove orthodoxy. You must have missed the memo.”

By themselves, miracles don’t prove anything, except that something unusual has just happened. Miracles are a sign which draws attention to something. Jesus’ miracles attracted multitudes, but as soon as He got theological — “I am the bread of life” — people deserted Him in droves (John 6:25-66). Jesus’ miracles pointed to His message, but they didn’t guarantee people would accept it.

Throughout the book of Acts, there are numerous examples of the disciples doing miraculous things as the Holy Spirit enabled them — which drew attention to the message that the disciples were preaching: the Gospel of Jesus. Yet even the Bereans were commended for searching the Scriptures to prove the truthfulness of Paul’s message (Acts 17:10-12). The miracles weren’t the gospel; they only pointed to the message of it. To use a common phrase, “signs and wonders are signs that make you wonder”. But that’s quite a different thing than functioning as “proof”.

In the case of Branham’s “Serpent Seed”, it doesn’t matter how many miracles may or may not have happened — the teaching is blatantly unscriptural. There’s no getting around that. When miracles are trotted out as proof that God isn’t concerned about theology, what we have is an “epic fail” in the area of discernment.

The other argument that I hear all too often is something along the lines of: “Well, if you actually knew anyone involved, you’d see what wonderful and Jesus-loving people they really are.”

Which, being translated, means: “Nice people can’t be deceived.” (!?)

Where do we get the idea that sincerity = orthodoxy? Or that anything unorthodox always resembles a flesh-eating Zombie Apocalypse? I don’t know about you, but I’ve got some extremely nice friends who have no use for Jesus, and I also know some Christians who act like (ahem…) butt-heads.

Let’s face it: when the Arian heresy was rejected, there were probably a lot of sincere Arians who were hurt and offended. Marcion had a lot of followers who were probably also nice people. Cult leader Jim Jones probably had some very sincere believers drinking the Kool-Aid in Guyana.

It would be so much easier if miracles proved orthodoxy. It would be very reassuring to think that nice, sincere people could never be deceived. But that kind of thinking can be dangerous.

In the case of the Latter Rain, in order to get past the theological face-palming, probably the best thing would be for people to actually read the writings of William Branham, Franklin Hall, or George Warnock for themselves. Not read about Branham, Hall and Warnock — read what they wrote. And compare their teachings to Scripture.

That would be a real eye-opener, and would result in theological face-palming for an entirely different (redemptive) reason.