What is the Bible for? 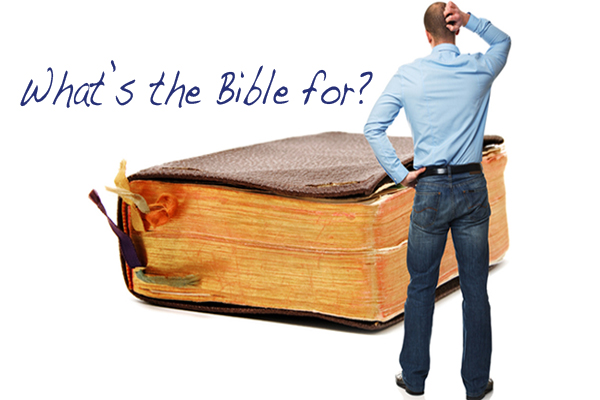 I recently shared with some friends that you can tell what you think the Bible is for by examining your own primary use of the Bible. Consider four typical ways people use (or think about) the Bible, and then consider a fifth important addition to all of these.

#1 – The Soterian Approach – The Bible as an “escape manual.”

When people use language like, “The Bible is Basic Instructions Before Leaving Earth, (get it, B.I.B.L.E.?!), they are telling you that they primarily think of the Bible as an escape manual that tells you how to get from earth to heaven (instead of hell). Just follow the simple instructions, and when you die, you’ll go to heaven.  That’s why we can think of this as the “soterian” approach (or an approach that thinks of the Bible as primarily about salvation). A favorite verse for the soterian approach is 2 Tim. 3:15.

#2 – The Sophia Approach – The Bible as a devotional book.

A favorite verse for the sophia approach is Joshua 1:8.  Devotional Books like the “Daily Wisdom Devotional Bible” and “Pearls of Wisdom Daily Devotional” approach the Bible as a wisdom-book (sophia in Greek). There’s plenty of wisdom in the Bible. The book of Proverbs is wisdom literature, and the theme of wisdom is pervasive as a biblical theme, so this is not an attack on the idea that one can grow in wisdom (which is the skill to live in the world the right way) through reading the bible. But the Bible isn’t primarily a devotional book written for my personal inspiration. The Bible isn’t written as a collection of devotionals with a verse or two followed by a daily thought for motivation and inner peace. Approaching the Bible primarily as a devotional book is missing the point of what the Bible is for. By the way, don’t stop reading your bible every day and following the wisdom that the Lord gives you as you read — but there is more than inspiration for you daily walk to be gained from the bible. Read on… 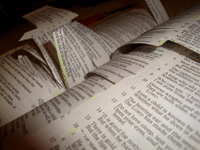 Okay, “spell book” might seem a little harsh, but stick with me (because I’m sticking with the terminology). The person who takes this approach to the Bible thinks of it a a book of secret insights that have to be mined out into a pile, then re-assembled into a formulaic system that can be followed step-by-step.  Adherents of the Word of Faith theological system are masterful (uhem!) at this approach to the Bible.  Need healing? Just find 5, 6, 8, or 10 verses about healing from wherever you can in the Bible (regardless of their original context), assemble them into some kind of logical order, then point at your list and say — “There, that’s what the Bible teaches about how to get healed!” The “spell book” approach wants to see the verses that have been discovered in the secret formula as things that you have to “believe really hard” and say out loud over and over again (never doubting, of course) so that the spell will work, and you can get the outcome you desire.  People who take this approach to an extreme tend to think of the Bible as something that “works” (like good magic works if you do it right).

#4 – Standards & Laws Approach – The Bible as a rule book

A favorite verse for this perspective is Ps. 119:9. This approach to the Bible is similar to the secret formula approach, only the person who sees the Bible as a collection of standards and laws tends to read the Bible in search of negative and positive imperatives (that means lists of dos and don’ts).  Listen there are some “lists” in the Bible that are unmistakably commandments and laws, and there are things God tells His people they are to do, and things they are not to do, but there is always something behind the laws in the Bible that many of us miss. Ultimately God’s law is a reflection of God’s nature, and a way of helping people to live in the world on his terms. Laws are not there to help us keep God happy by doing what he says (or to give us a way to earn God’s favor). If those are your motives, you’ll tend to approach the Bible as a rule book, and you’ll look for all the rules when you read — instead of looking for God in the rules and asking, “What does this say about God?” or “What is God’s heart for his people that he would require this of them?”

A fifth addition to all of these…

What if we shouldn’t be mining through the Bible looking for the escape plan so that we can craft a well-articulated “plan of salvation,” or looking for inspirational verses to get us through our day — helping us to be more successful and effective in our pursuits, or trying to find secret formulas to make the Bible “work” for us, or looking for laws to obey so that we can keep God happy and remain in God’s good graces? What if we shouldn’t be pushing all that narrative aside, imagining that the really good stuff in the Bible is somehow hidden in the text, or that there is a lot of superfluous text in between the really good and important stuff that the Bible has to say?

I was in a conversation a few days ago with a friend and we were talking about the idea that “the Bible is a grand narrative — a story.”  She instantly recoiled at the idea, and thought that when I used the word story, I meant something like “fairy tale” or “moralized fiction” or  perhaps even “myth” in the sense that we use fiction in order to advance a moral or spiritual agenda (like Aesop’s fables or Greek Mythology) — something like that.  Nope. That’s not what I mean. 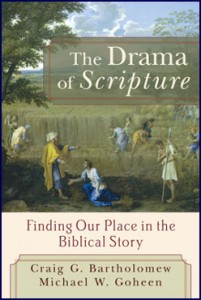 In their book, The Drama of Scripture, authors Craig Bartholomew and Michael Goheen write: “…the Bible alone tells the true story of our world” (p. 20).  When I use the word “story” (as do most biblical theologians when explaining what the Bible is) I mean that it is a true account of what God has done, is doing, and will do in the world.  Bartholomew and Goheen helpfully outline the story in their book as a drama in six acts:

I like this outline as well as (or better than) several others that have been proposed by biblical theologians. Present-day Christians, by accessing the story in their Bibles, can learn what God has done, what God is doing, and what God will do. But there is something amazing about this true story…

YOU can join it!

The Bible is a story that we can join by jumping into the redemption project that God has begun.

Where do we jump in?

What does this have to do with reading the Bible?

Once I began changing my understanding of the Bible, seeing it as a grand narrative, and the story that we get to join, I began reading the Bible differently.

As I read, I see the unfolding purposes of God over time. I see how God revealed himself to his people along the way. I see how he shaped them for his purposes and his Kingdom project.

I see how the story comes to a crescendo in the life, ministry, crucifixion, burial, and resurrection of Jesus.

I see how the early Jesus-followers kept the story going forward in the book of Acts and the letters.

I see where the story is ultimately headed in Revelation.  I see invitations to know the God of the Bible, and to join His Kingdom.

Yes, God will speak to me as I read. Yes, I’ll get my understanding of truth (e.g. doctrine) ironed out as I read.  Yes, I’ll learn how to deal with my issues as I watch others in the pages of the grand story interact with God.

Bartholomew and Goheen propose that we ask a BIG question when looking at the Bible in this light. They write:

Now, given the trajectory of the story as it has been told to this point, and especially knowing that we have been entrusted to perform the continuation of Act 5 — the mission of Jesus and the early church — how  are we believers to live our lives today?  How can we play our part so as to allow the story to move forward toward the conclusion that God has already written for it? (p. 198)

I suggest that this question can be used every time we come to the Bible alone, with a small group study, with a younger believer in times of discipleship, in preaching, or even in academic study.  If we keep the story central, realize we’re invited to join it and move forward with it — and realize that it is the only true story of the world — our lives can truly be shaped by Scripture!

Thus, I propose that shaping the whole world that God has made, and the people that he loves, into HIStory is what the Bible is for!