Who does God love?

In the summer of 1777, John Wesley drew up a basic sketch of his idea for what would become The Arminian Magazine.  The excerpt below is from a document containing some of his initial ideas and the impetus for his idea for creating the magazine in the first place.  Here are the first three paragraphs exactly as they were written by Wesley to those who might be interested in reading his new magazine. 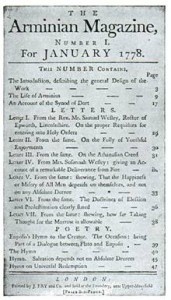 Amidst the multitude of magazines which now swarm in the world, there was one, a few years ago, termed The Christian Magazine, which was of great use to mankind, and did honour to the publishers. But it was soon discontinued, to the regret of many serious and sensible persons. In the room of it, started up a miscreated phantom, called The Spiritual Magazine; and, not long after, its twin sister, oddly called The Gospel Magazine. Both of these are intended to show, that God is not loving to every man, that His mercy is not over all His works; and, consequently, that Christ did not die for all, but for one in ten, for the elect only.

This comfortable doctrine, the sum of which, proposed in plain English, is, God before the foundation of the world absolutely and irrevocably decreed, that ‘some men shall be saved, do what they will, and the rest be damned, do what they can,’ has, by these tracts, been spread throughout the land, with the utmost diligence. And these champions of it have, from the beginning, proceeded in a manner worthy of their cause. They have paid no more regard to good nature, decency, or good manners, than to reason or truth. All these they set utterly at defiance. Without any deviation from their plan, they have defended their dear decrees, with arguments worthy of Bedlam, and with language worthy of Billingsgate.

In the Arminian Magazine a very different opinion will be defended, in a very different manner. We maintain, that God willeth all men to be saved, by speaking the truth in love; by arguments and illustrations drawn, partly from Scripture, partly from reason; proposed in as inoffensive a manner as the nature of the thing will permit. Not that we expect those on the other side of the question will use us as we use them. Yet, we hope, nothing will move us to return evil for evil; or, however provoked, to render railing for railing.1

I’ll end here with a famous quote from J.W. (likely to appear more than once in the Weekly Wesley) taken from a sermon and published pamphlet entitled “Free Grace.” Speaking to the idea of God pre-destining some people to damnation, Wesley wrote:

No scripture can mean that God is not love, or that his mercy is not over all his works; that is, whatever it prove beside, no scripture can prove predestination. 2

Okay, now it’s your turn. Comment below. What do you make of Wesley’s critique of the theological idea of damnation by divine decree? Agree? Disagree? Modified view? Caveats? What? 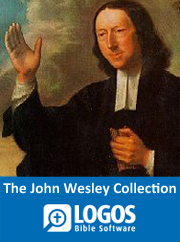 Learn more about John Wesley here.
Buy your copy of the Wesley Collection in LOGOS here.