by Luke Geraty | Oct 17, 2013 | Across the Web, Apologetics, Charismatic Theology, Conflict Resolution, Why I am "Charismatic" 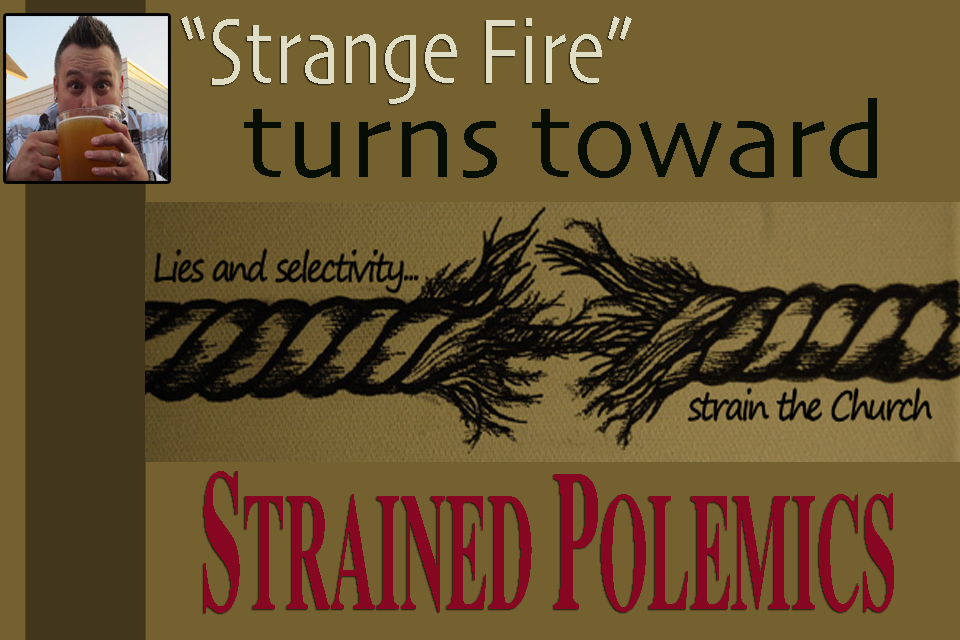 So the firestorm from the Strange Fire Conference has been steadily building throughout the past few weeks and is now in full swing. When word got out that the conference was going to take place and that John MacArthur was releasing a book of the same name, Dr. Michael Brown appealed to MacArthur to embrace God’s true fire and then addressed R.C. Sproul (a speaker at the conference) before issuing a challenge to the charismatic world (which MennoKnight took as a volley at the Cessationist crowd, though I thought it was addressed more towards Charismatics). In turn, a host of videos were released by John MacArthur (found here) that, in a sense, responded to some of the concerns and questions that Brown made. Furthermore, Fred Butler responded to Brown on behalf of MacArthur and then Brown responded to Butler. Are you keeping track of all of this?

The day before the Strange Fire Conference began, Brown issued a final appeal to MacArthur, as well as a simple review of his forthcoming Strange Fire. In addition to Brown’s final appeal, Michael Patton wrote on why he thinks MacArthur may be losing his voice and provided some extremely helpful reflections on why MacArthur wasn’t being as thoughtful as he has been in the past. Then the conference began…

If you think a lot of interaction occurred before the conference began, you can be sure that a lot of interaction has been taking place as the conference continues and I’m sure it will continue going forward. Tim Challies has been liveblogging the event and, quite frankly, some of what has been reported by him has raised some serious concerns and questions by Continuationists (e.g., Adrian Warnock can’t believe some of the statements that MacArthur made; by the way, Adrian links to my top ten books list on charismatic theology! Thanks, Adrian!). Not to mention the fact that it’s interesting that Challies has seen fit to make a “clarifying” note in regards to the insane comment made by MacArthur:

“The charismatic movement offers nothing to true worship because it has made no contribution to biblical clarity, interpretation, or sound doctrine.”

Yes, you read that correctly. According to MacArthur, the Charismatic Movement has made no contribution to biblical clarity, interpretation, or sound doctrine. That statement alone almost makes me want to move MacArthur from the category of “agree to disagree” and move him into the category of “have you been smoking crack?” My good friend Thomas Creedy has written a very thoughtful blog, “Charismatic Clarity: Responding to ‘Strange Fire'” that I think everyone should also check out. Oh, and Scott Lencke asks some important questions about MacArthur’s methodology (he calls it an odd approach) and then provides some links to refute some of the exegetical and theological reasons behind cessationism.

So if you are still tracking with me, you’ll probably already recognize that I’m clearly in complete dismay at MacArthur’s words, the overall tone of the Strange Fire Conference, and in disagreement with many of the points that are being taught through this conference styled “exposé.” But everyone who knows me will likely be aware of the fact that I’m a Continuationist when it comes to the charismata, so that isn’t news. And you’ll likely know that I’m also critical and concerned about the absolutely unbiblical doctrines and practices that are found with the Word of Faith movement. The vast majority of Pentecostal, Charismatic, and Third Wave scholars are too, with some of them writing some excellent books on the subject (cf. Gordon Fee’s The Disease of the Health and Wealth Gospels and D.R. McConnell’s A Different Gospel).

Now, what inspired this here blog post was that my friend Lisa Robinson wrote a blog, “Cessationism, Charismania, and Criticism.” Before commenting on Lisa’s general point, I want to thank her for positively mentioning me in her post. She wrote,

“I ran across guys like Wayne Grudem and Sam Storms, scholars, pastors and authors. I encountered Vineyard guys like Luke Geraty and others who took the Bible and discipline of theology serious. These folks are not the experience driven, ignore the Bible, anything goes step-child fringe that rightly deserves critique.”

Did everyone see that? If Lisa says I’m not part of the “step-child fringe,” it’s fact. Thank you, Lisa! Finally someone agrees with me! Ha ha! If anyone claims that I’m just another wacko charismatic, see Lisa.

Anyway, Lisa builds off of some of the ideas that Patton previously shared in relation to the fact that the Charismatic Movement is not monolithic. As many of you probably know, Pentecostals, Charismatics, and Third Wave folks each have distinct theological (and practical) perspectives regarding the subject at hand. And to be somewhat historically accurate and globally aware, I should acknowledge that my professor, Dr. Allan Anderson, actually makes a strong case for there being much more than these three movements, and corresponding events, within the broader global stream of Continuationism in his excellent To the Ends of the Earth.

Well, Lisa told me that she’d love for me to interact, so I’m interacting. When a Dallas Theological Seminary student asks you to talk about theology, you do it… mostly because if you don’t you might miss the pre-tribulational rapture… and I do not want to spend all of my time with the Tribulation Force fighting against Nicolae Carpathia (kidding!).

Lisa’s heart is similar to mine. After stating that she essentially understands why there are thoughtful Continuationists and thoughtful Cessationists, she writes,

“And this is why I was so bothered by what I saw, not only the fact that a whole conference had been based on a polemic against the Charismatic movement wholesale. But in reaction against this, Charismatics did the same thing with cessationists, building tired strawmen arguments and calling cessationism silly and devoid of the Spirit.  I wish those that raise these polemics would consider this thoughtful article What Cessationism is Not. Please do check it out and realize there are good and valid reasons for cessationism.”

I share some of her concern here. For me, I want to just bring it back to what the Apostle Paul said: “Love one another with brotherly affection. Outdo one another in showing honor” (Rom 12:10). In my recollection of all that MacArthur has said and done in the past, I think it’s fairly safe to say that this whole situation is nothing new. That’s primarily why I do not read MacArthur’s books, listen to his sermons, or get much involved in all the squabbles he creates or is in the middle of. Most of the time I just shake my head and say, “When it comes to Cessationists, I like Richard Gaffin a lot more.” At the same time, I want to be extremely clear to those who have been asking me my thoughts: I do not believe there is a convincing case against the Continuationist perspective on the spiritual gifts to be found in the Bible or in Church history. But that doesn’t mean we should be mean-spirited to people we disagree with. Lisa takes a different approach than I do on some issues, but I still really appreciate what she writes and consider her a friend. I think Continuationists should most certainly check out the link she mentions (“What Cessationism is Not”) too. Despite the fact that I think some of the historical “evidence” provided in that blog is questionable related to the historical precedent of the charismata in history, overall it is a thoughtful explanation of what characterizes the Cessationist position. The author, Nathan Busenitz, writes:

“I love the Holy Spirit. I would never want to do anything to discredit His work, diminish His attributes, or downplay His ministry. Nor would I ever want to miss out on anything He is doing in the church today.”

I believe him. I really do. I disagree about his conclusions, but I think he seriously loves the Spirit, the work of the Spirit, and is likely engaged in God-exalting ministry. He and I likely agree on many aspects of the Christian faith (i.e., we’re both Calvinists I’d guess). Yet we disagree on the continuation of the spiritual gifts.

So why are people who self identify as “charismatics” so upset about MacArthur’s conference theme and the talks being given? Why aren’t they angered when other Cessationists write books or give teachings on the subject? I think there are two main reasons:

(1) Misrepresentation: MacArthur has historically misrepresented mainstream Continuationists for years and has not changed his tone whatsoever. This was demonstrated repeatedly by Rich Nathan in his “A Response to Charismatic Chaos.” People, in general, do not like to be lied about.

(2) Selectivity: MacArthur has historically been extremely selective in his interaction with Charismatics. Rather than seriously engage in a scholarly way with Gordon Fee, Wayne Grudem, Sam Storms, Craig Keener, or John Piper, he chooses to brush them aside and go for the easy targets: TBN personalities. Listen, the vast majority of Charismatics that I know of would agree 100% with MacArthur’s hyperbolic statement that when Jesus returns to judge, he’s going to start at TBN. MacArthur’s methodology is no different than if I decided to host a conference and dedicated it to exposing the Baptists and spent all of my time criticizing Fred Phelps of Westboro Baptist Church and gave the impression that all Baptists agreed with Phelps’ statements and practices.

Some of the statements that have been made during the Strange Fire conference are almost comical. I guess when you are preaching to the choir, you can get away with anything. But you know what? I think Charismatics could also take a stronger stand against some of the excesses, personality cults, and heretical teachings that are found within charismatic churches. Just like we should do when they are found in non-charismatic churches. Polemics aren’t always wrong-headed. In fact, as I recently discussed in my review of Against the Gods, polemics have their place in theological struggle. But when you are interacting with other Christians, shouldn’t love, grace, and honesty characterize your polemics? Heck, I’d even argue that those qualities should be represented in your polemical interaction with non-Christians. No one likes being lied about and it’s hard to respect someone who won’t take the time to use honest scholarly methods.

I’m sure there will be more discussion on the subject, so I’m thankful that there is some good than can come from MacArthur’s foolishness. In this case, the strange fire turns towards strained polemics, and that’s too bad. Rather than misrepresent and selectively interact, it would have been helpful if MacArthur has simply laid out his biblical, theological, and historical cards on the table as to why he is a Cessationist. He should have left all of his pejoratives aside and actually made a case for something (R.C. Sproul did a much better job of this in his talk at Strange Fire). Rather, MacArthur stood up there and waxed on about the evils of the Charismatic Movement without providing much more than the impression that he’s bitter and angry and probably lost a lot of people in his church to the charismatic one down the road. At least that’s the impression he gives.

What do you think about this whole hoopla? Anyway observations you have?

Update: Joshua Ziefle wrote an interesting blog from a Pentecostal perspective in response to Strange Fire too.