Only Men Can Adequately Represent the Incarnate Son of God?

Commenting on the concept of a “diaconate of women,” some suggest that:

“The same patristic sources that attest to the existence of women deacons emphatically state that women could never be priests. For Jesus Christ chose only men for this ministry and the Church has always honored this tradition. The Church has consistently excluded women from teaching or from any position of authority in spiritual matters. The deeper ground for all this… lies in God’s decision to become incarnate as a man, so that only men can adequately represent the incarnate Son of God.” (John Wijngaards, Women Deacons in the Early Church, 7). 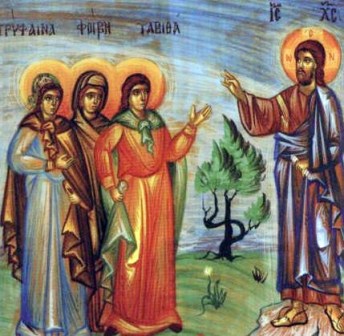 Let’s place this quote in context.

Protestants will naturally reject many of the underlying presuppositions that are found in this quote, but the area that stands out the most to me is the statement that “only men can adequately represent the incarnate Son of God.” I find that statement extremely problematic, for two reasons:

“By imitating 1:27–28, the author ties the significance of the genealogy to creation theology, where human life stands in the descent of God (cf. “sons of God,” 6:2) and is the preeminent recipient of God’s blessing. This linkage is achieved by a number of lexical repetitions, including “man,” “created,” “likeness,” “male and female,” and “blessed.” The same creation themes of 1:1–2:3 are rehearsed in 5:1b–2 by its appeal to the parade passage of the creation narrative, the making and blessing of mankind (1:26–28). Divine image and blessing are continued among the human family, it would seem, without suspension.” (K. A. Mathews, Genesis 1-11:26 [New American Commentary], 307)

This means that men and women were both given the same “likeness” in representing God, so any assumption that states that all of Christ’s representatives are all male seems to overlook the basic doctrine of Imago Dei.

(3) The Great Commission and the Sacraments were given to the Church as a collective whole, not to a specific gender (cf. Matt. 28:18-20; Luke 22:19-20; 1 Cor. 11:24-34). No where in Scripture are we informed that the mission and ordinances are for men only. That’s a foreign assumption that is read into our theology.

This is not to suggest that I see no distinctions made between gender roles in Scripture, but that using the argument that “only men can adequately represent the incarnate Son of God” is not a great place to begin because it overlooks Imago Dei, the outpouring of the Spirit, and commission of the collective Church.

For further thinking, I’d also recommend that you check out Thabiti Anyabwile’s article, “I’m a Complementarian, But… Women Can Be Deacons” too.