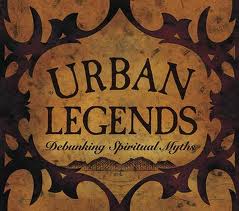 Trevin Wax has a great blog post – Urban Legends: The Preacher’s Edition. He states that there “are a number of urban legends that get repeated in sermons,” and that “some are more pervasive than others, even appearing in commentaries and scholarly works.” Which urban legends does he address? The following:

2. The high priest tied a rope around his ankle so that others could drag him out of the Holy of Holies in case God struck him dead.

3. Scribes took baths, discarded their pens, washed their hands, etc. every time they wrote the name of God.

4. There was this saying among the sages: “May you be covered in your rabbi’s dust.”

5. Voltaire’s house is now owned by a Bible-printing publisher.

6. Gehenna was a burning trash dump outside Jerusalem.

7. NASA scientists have discovered a “missing day” which corresponds to the Joshua account of the sun standing still.

Hilarious stuff. I’ve heard six of the seven in more than one sermon. Numbers 1, 2, 3, and 7 have been adequately debunked, but a few of the others still get passed around all the time (e.g., number 6). You’ll have to read Trevin’s full post to read the actual “evidence” that shows these ideas to be faulty.

“Those of us who are entrusted with the task of expositing the Scriptures in a local church must take care to verify our sources, illustrations, and stories. No matter how helpful an illustration may be, it is dishonoring to God if it is untrue.”

I’d want to make one clarification to this statement. First, I’m in complete agreement that pastors/preachers/elders/teachers should take care to verify things they are saying. That’s surely important. However, I’d want to make sure to clarify that the problem is mostly related to when people are intentional in relating information that is proven to be false. I’m certain there are many of us who have unknowingly passed on something that is later discovered to be untrue or a misrepresentation. We need to do our best to avoid this, but also not be scared of preaching with boldness. There’s a lot more that could be said on this, but I overall really enjoyed Trevin’s blog!

The Gospel is news of what God has done to reach us. It is not advice about what we must do to reach God.