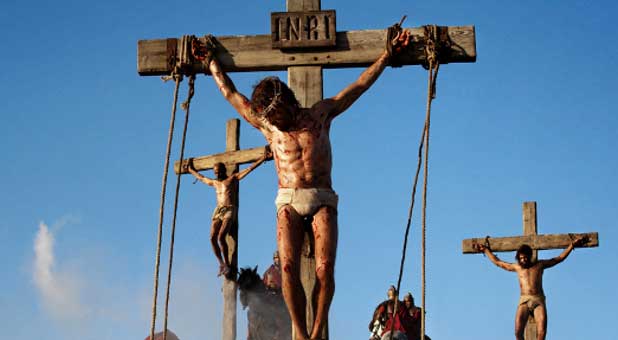 Last time Jesus was mocked by the soldiers of Pilate’s battalion. And now they conscript Simon of Cyrene to carry the crossbeam for the severely weakened and exhausted Jesus (v. 21). His sons, Alexander and Rufus, are mentioned because they were members of Mark’s community (the original recipients of this gospel). Whether or not Simon was a later convert to the faith, for purposes of the narrative, he serves as a symbol of faithful discipleship, willing to take up the cross and follow Jesus all the way to His execution – precisely what the twelve failed to do (see Geddert, BCBC).

“the one who was not able to carry his own cross (15:21) is the one who enables us to carry ours.” -Athol Gill

cited in NIVAC by David Garland

Golgotha (v.. 22), a.k.a. Calvary, is so named (Place of a Skull) because of its rounded appearance* as well as its association with death. In v. 23, the soldiers offer Jesus a painkiller, but He refuses. For not only would this have violated His promise to not drink the fruit of the vine again until the consummation of the Kingdom of God (Mark 14:25), but He has committed to drink this cup of suffering (Mark 10:38 & 14:36), in obedience to the Father’s will.

Mark provides very little description of the crucifixion itself (v. 24), its horrors were well known in the ancient world. His concerns are with its theological significance (found in the follow on narrative). As an added humiliation, Jesus’ last remaining possessions, His clothing, are taken from Him. The citation from Psalm 22:18, seems to indicate that even this is in accordance with God’s will. In contrast, previously, touching His clothes brought healing to others (Mark 6:56, 5:27), and at the Transfiguration they revealed His future glory (Garland, NIVAC).

The third hour (v.25), a reference to 9am, is internally consistent within Mark with the early morning Trial before Pilate.** It was here on Golgotha that Jesus was nailed to the crossbeam and hoisted up onto the vertical beam already embedded in the ground, to which His feet were then nailed. The inscription of the charge against Him that was displayed as He was paraded through the streets of Jerusalem, is now affixed to the implement of His execution:

“The King of the Jews”

This is Pilate’s final revenge on those who had forced him into this most difficult position. Despite Jesus’ consistent resistance to the offer of political power, He is executed as a political subversive against Rome. The crowd came to arrest Jesus as a robber – now two robbers (v. 27) take the place that James and John (who are absent here) had requested, on His right and His left (Mark 10:37), at the cross. Jesus dies as He lived – in the company of sinners!***

It would seem that Golgotha was not a particularly high hill, since passers by were able to mock and hurl insults at Him (Mark 14:29, NIV).**** The wagging of their heads is an act of contempt (taken from Ps. 22:7). Their scornful allusion to the Jesus’ destruction of the Temple, and the accompanying challenge to “come down from the cross” (v. 30) would in truth mean Jesus disobeying the will of the Father (of which he had been assured just hours before in the garden). The irony comes in the fact that:

“Jesus’ death does destroy the temple made with hands and builds a new one not made with hands… a new community of worshipers who believe that in his death Jesus bore the sins of a jeering and murderous world and that God vindicated him by raising him from the dead. His death abolishes the need for any more temple sacrifices, and God will soon build a temple without walls through Jesus’ resurrection.”

Similarly, the chief priests and scribes deride Him “He saved others… but he can’t save himself (Mark 14:31, NIV). What they intend as jest is again (as with the soldiers’ mockery) actually ultimate truth! As if that wasn’t enough, they really lay it on thick in v. 32. But they have no intention of believing in Jesus regardless of what they see. In their minds ‘saving others’ probably refers to Jesus’ healing ministry, but Mark wants us to think in terms of (spiritual) salvation. But again, if Jesus were to save Himself from this suffering, then He could not fulfill His mission of saving all of us. Jesus’ desolation in this passage is brought to completion as the robbers crucified with Him join in with the mockery of religious elites.

So what’s a disciple to do with the crucifixion? Well the first thing we’ll want to note is that the 12 aren’t present in this scene. So we are called to not imitate their negative example, by remaining faithful to Christ in all circumstances (trials) as Jesus does here.

“The Gospel story depicts many of the sins that put Jesus on this cross: pride, envy, jealousy, betrayal, cruelty, greed, indifference, cowardice, and murder.”

The soldiers are indifferent to the horror before their eyes, but instead focus on a bit of selfish gain (greed). The passers-by cannot even fathom Jesus’ self-sacrificial motivation, but only “save yourself” (selfishness).

The priests and scribes think they have won, but God has another plan that their pious, prideful religiosity could never imagine. Jesus will rise from the dead, and their Temple will fall into ruins! Jesus remains virtuous throughout the heinous ordeal, showing us how to be truly be human. Jesus lives out His own teaching with perfect integrity:

The one who tries to save his life will lose it. The one who gives up his or her life will gain it and will give life to others.*****

No disciple can provide an example for us here (for they have all run away and saved themselves). Only the Lord Jesus Himself can do that in this passage. We must avoid sins like pride, hatred, violence, betrayal, cruelty creed, by living according to the kingdom values that Jesus showed us: kindness, compassion, love God-love people, selflessness, generosity, and faithfulness (to name a few).

Follow Jesus, my friends, and follow Him alone! Remain faithful to that, even when circumstances get really, really hard.

NOTES:
* Cole does not buy the two eyes of Gordon’s Calvary, and so prefers the Church of the Holy Sepulchre as the site of Jesus’ crucifixion.
** See Lane (NICNT) or France (NIGTC) for a discussion on the timing inconsistencies with John’s account.
*** following Garland here.
**** Note that v. 28 is likely a scribal addition taken from Luke 22:37, and is therefore omitted from the ESV, NIV, et al. (see Geddert, BCBC or Metzger).
***** Following Garland closely throughout this closing/application section