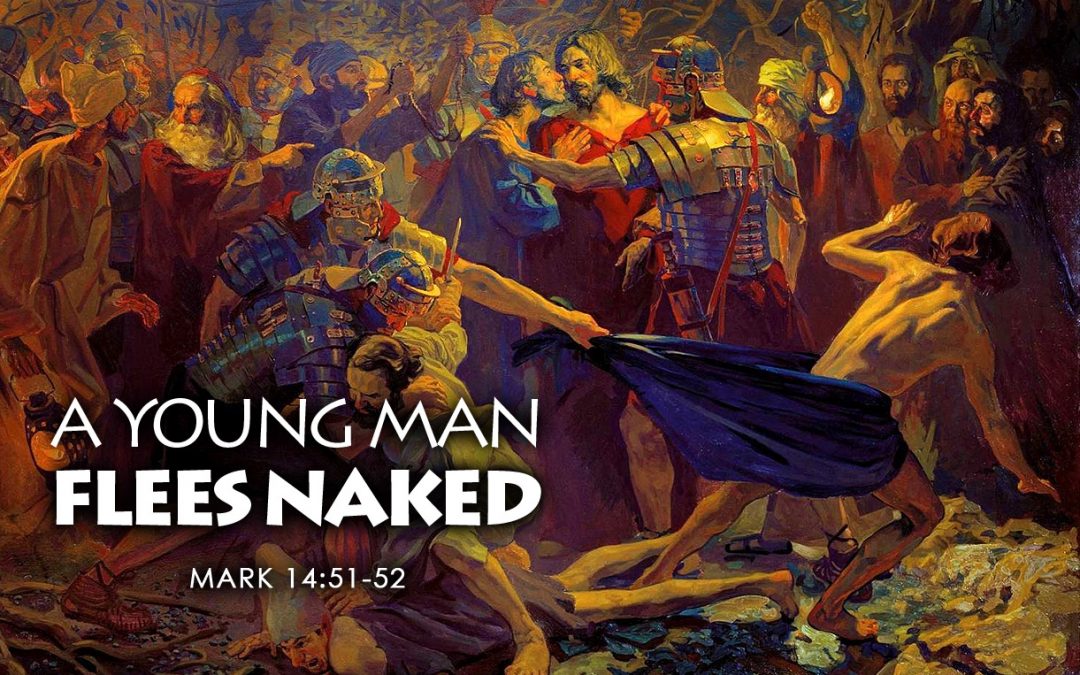 Most English translations seem to treat these verses as part of the previous passage on the arrest of Jesus. I have chosen to follow the pericope/paragraph divisions of the ESV and treat it separately. For what it’s worth, the ESV divisions follow the section headings found in my UBS4 Greek New Testament, and the Nestle-Aland 28 paragraphing. While its thought is certainly tied to the end of the previous passage (where ‘they all fled’ in Mark 14:50), it can certainly be taken alone if nothing else purely on the basis it’s enigmatic qualities within the text.

If nothing else, this short passage is mysterious! Questions flood our mind:

Geddert calls it a “riddle” and “odd.” Taylor (cited in Garland, NIVAC) asks “Why insert so trivial a detail into so solemn a narrative? In a similar vein, Geddert says “this is not the time for comic relief” yet he sees intentionality on the part of John Mark, i.e. another riddle (p. 354).

Who is the young man (v. 51)? Well we might as well start here. Most of us have probably heard that the young man here is the author himself, John Mark (similar to the way that the beloved apostle John mentions himself in his own gospel without mentioning himself as if its some sort of false humility – John 13:23, 19:26, 21:17 & 21:20). Lane (NICNT) sees the root of this view in the conjecture of several church fathers. Despite that, Geddert makes a case for this traditional view, but not for the same reasons you might think. I found his argument fairly compelling and follow it here.

First Geddert dismisses some of the more ‘fanciful’ (Garland cites Raymond Brown, p. 299) attempts to tie it to Old Testament (and other New Testament) passages:

The argument for identifying John Mark as the young man herein goes like this: Acts 12:12-13 tells us that the early church met in Mark’s home in Jerusalem. So it is possible that Mark’s home was actually the site of the Last Supper. In haste (i.e. without his undergarment – see Lane), Mark could have followed either Jesus and the disciples, or even Judas and the crowd to Gethsemane.

But it is in his understanding of Mark’s motivation for including this bizarre story in his narrative that Geddert gets interesting.

Mark’s point is not “I was an eyewitness” but rather “I ran away, too!

This fits perfectly with Mark’s theme of failure and renewal (esp. given his close association with Peter as the primary source for his gospel). Right at “the point where all of the disciples fail, Mark adds:

I know about that. I have been there! My failure was no less shameful! But I too heard the invitation to meet Jesus again in Galilee (cf. 14: 28). These fleeing apostles came back, I came back, and so can you!”

If all this is true, then this befuddling passage finally makes sense! And that, I think, is the real selling point of Geddert’s view here. He then does tie it as an allusion to the resurrection passage in Mark 16:5, thus seeing John Mark as proclaiming the crucified and risen Jesus, which is exactly what he has been doing throughout his narrative account of the life of Jesus!

The (11) disciples aren’t here in this passage (they all ran in v. 50). The only disciple present here is this young man in this scene. If we believe Geddert’s argument then the only application for us as disciples is to imitate the disciple John Mark, not in his fleeing here (v. 52), but in his good news proclamation that the crucified King, Jesus, is risen. He is risen indeed! And it makes sense that the original recipients of Mark’s gospel account would have understood his narrative this way too!

Are willing to follow Jesus to the point of losing your clothes in public as this young man did? Follow Jesus, even if it means getting naked. Repent and believe (Mark 1:15). Go and tell (Mark 16:15)!