Jesus is Arrested: The Disciples’ Failure is Complete! – Follow Me (Part 67) 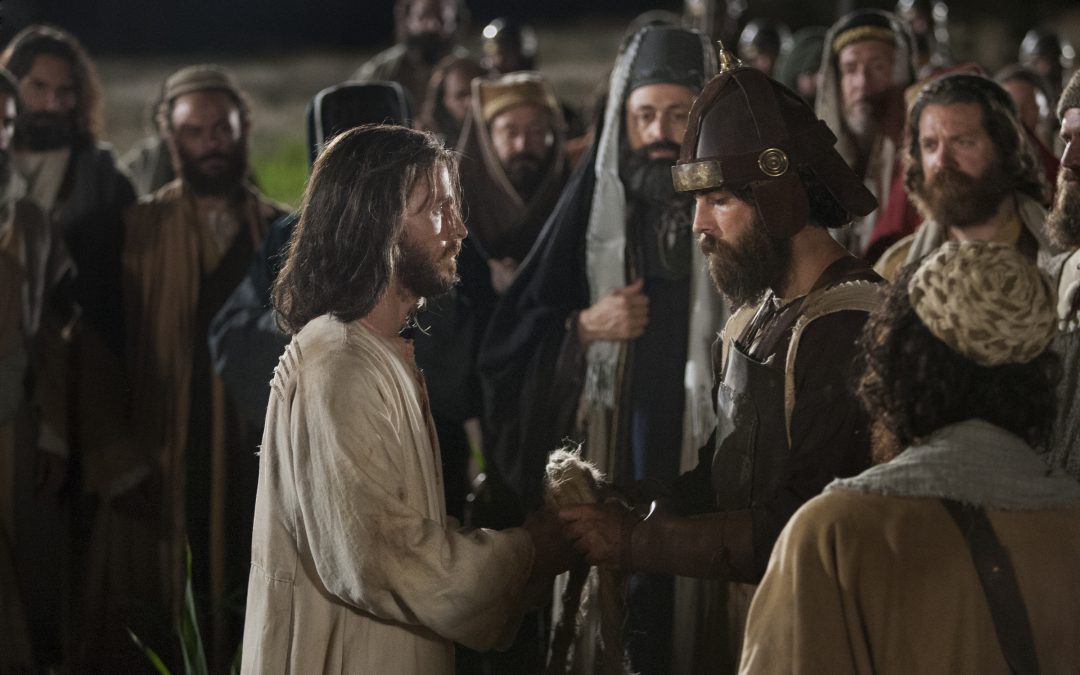 Last time we saw the disciples fail Jesus during His time of sorrow in the Garden of Gethsemane. That episode ended with Jesus saying, ‘my betrayer is at hand!’

And we pick up here with “immediately, while he was still speaking” Judas shows up with an armed crowd to arrest Jesus . The “crowd” here is less likely an unruly, disorganized mob, but rather more like an organized police force sent by the Temple authorities, as the later part of verse 43 indicates. We also should not miss that Mark reminds us (again) here that Jesus’ betrayer is “one of the twelve,” thus emphasizing the horror of the act, and reminding each of us that any disciple can easily fall from faithfulness (Geddert, BCBC). Judas’ kiss (the customary greeting for showing both love and respect from a disciple to his Rabbi) as the means of betrayal (see Garland, NIVAC; and Cole, TNTC) only twists the knife deeper into the wound. We will not hear of Judas again in Marks’s story. This is his legacy (v. 44-45).

Jesus is then taken into custody (v. 46). In the process there is a scuffle and one of the arresting party (“the servant of the high priest” – v. 47) loses an ear!

As we transition to Jesus’ response in verse 48-49 we begin to see some irony. While Judas may have anticipated some resistance on the part of the hasty disciples, they are no match for the armed police force sent by the Jewish authorities. But even more significant, Jesus, a teacher of non-violence, has no weapons, and nothing to hide. He taught publicly, in broad daylight “in the temple” – hardly the actions of a revolutionary leader plotting a violent coup!

“Jesus castigated the temple for being a robber’s den instead of a house of prayer for all nations (11:17). Now temple goons arrest him in the middle of his prayer, as if he is a robber.”

In the eyes of the reader, these auxiliary police sent by the Temple officials, end up looking rather silly.

“And they all left him and fled” – John Mark (narrator)

Jesus prediction about them, which He spoke earlier that evening en route from the Last Supper to the Garden, has been proven true. And their own arrogant, confidence has been proven a lie! They have all fallen away, and the sheep of the shepherd have been scattered (Mark 14:27-31).

What must this experience have been like for the 11 remaining disciples? Awoken from a dead sleep and scolded by the Master: “Get up!! Let’s go! Here comes my betrayer…” Immediately they see Judas entering the garden with what appears to be an armed force. But wait, no, he greets the Rabbi with the customary kiss? Suddenly the guards seize Jesus by force! There is a struggle, some blood, and now they are dragging Jesus away under arrest. You run from the scene in fear (a very normal, natural reaction). Later you think you remember Jesus saying something about the Scriptures being fulfilled? Peter attempts to follow, but only at a distance. Even this is hardly the kind of passionate loyalty expected of a disciple.

The words of Jesus echo in their minds, as we play back the scene: “Sit here while I pray” (Mark 14:32), “stay here and keep watch” (Mark 14:34), “watch and pray that you may not enter into temptation” (Mark 14:38). You finally have a moment to rub the sleep out of your eyes. There is nothing you can do now. Jesus is in the custody of the authorities. You are powerless!

This portion of the story can hardly be taken in isolation. Like Judas, the disciples quickly disappear from Mark’s narrative until after the resurrection (Mark 16:7). Until then, they likely won’t have time to reflect long enough to realize that they have failed to obey nearly everything Jesus asked of them. Peter, above all, will have to face his own brash arrogance! For now, the disciples, likely in hiding, are dominated by fear, and the natural bent toward self-preservation (NOTE: “Christ’s way always makes natural humanity stumble” – Cole).

At the risk of repetition, I think it is worth revisiting this quote from Garland:

“The sudden arrival of the hour of trial can be a cruel reminder how mistaken false confidence in past spiritual achievements is.”

Examine yourselves my dear Padawan, but do not lose hope. As followers of Jesus we are called to ask ourselves the question: will I learn from the disciples’ failure, or only repeat it? We have surely all already repeated it. But where do we go from here?

“The good news, however, is that failure in times of crisis is not permanent.” – Garland

Until next time, my friends, grow for it! And follow Jesus…