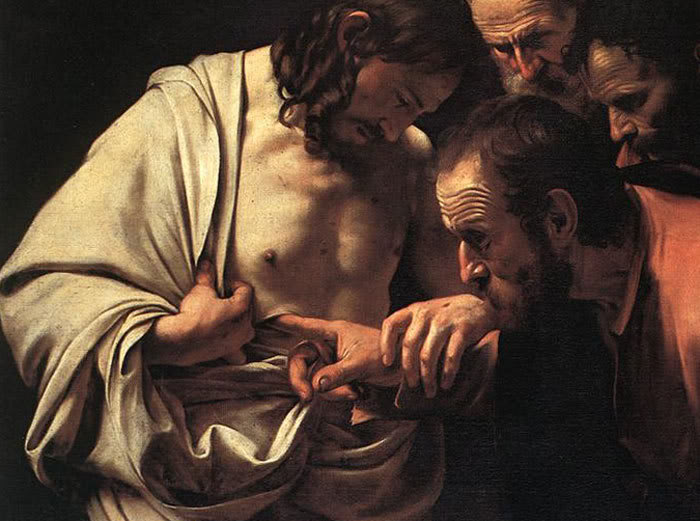 The entire biblical text and the reading below are meant to be read aloud in the company of friends and fellow believers, followed by discussion, confession, and prayer. This is the Sunday’s Gospel Reading from John 20:19-31 (ESV) in the Revised Common Lectionary. There’s another great post on this text by our own Able Baker HERE, but the text has come up again as the reading in the 2018 lectionary — so, here’s another look.

19 On the evening of that day, the first day of the week, the doors being locked where the disciples were for fear of the Jews, Jesus came and stood among them and said to them, “Peace be with you.” 20 When he had said this, he showed them his hands and his side. Then the disciples were glad when they saw the Lord. 21 Jesus said to them again, “Peace be with you. As the Father has sent me, even so I am sending you.” 22 And when he had said this, he breathed on them and said to them, “Receive the Holy Spirit. 23 If you forgive the sins of any, they are forgiven them; if you withhold forgiveness from any, it is withheld.” 24 Now Thomas, one of the twelve, called the Twin, was not with them when Jesus came. 25 So the other disciples told him, “We have seen the Lord.” But he said to them, “Unless I see in his hands the mark of the nails, and place my finger into the mark of the nails, and place my hand into his side, I will never believe.” 26 Eight days later, his disciples were inside again, and Thomas was with them. Although the doors were locked, Jesus came and stood among them and said, “Peace be with you.” 27 Then he said to Thomas, “Put your finger here, and see my hands; and put out your hand, and place it in my side. Do not disbelieve, but believe.” 28 Thomas answered him, “My Lord and my God!” 29 Jesus said to him, “Have you believed because you have seen me? Blessed are those who have not seen and yet have believed.” 30 Now Jesus did many other signs in the presence of the disciples, which are not written in this book; 31 but these are written so that you may believe that Jesus is the Christ, the Son of God, and that by believing you may have life in his name. (ESV)

A few years ago, my wife and I, and several couples from our church attended a marriage retreat. For us, it was the first one we had ever been to. There were hundreds of couples there from all over, and each of them was in various stages of life, and at varying levels of marital health. It was interesting to learn that some couples were actually there who were separated, others were trying just one last thing before they signed the divorce papers, and at the other end of the spectrum, there were people who went every year because they never wanted to let their marriages fall apart. At the end of that first conference (we went back two other times), there was a vow renewal service. Many of the couples who had showed up broken and torn apart with tears of pain were leaving that event healed, hopeful, and with tears of joy. Each husband left with a “new” wife, and each wife left with a “new” husband — a new marriage was born! During my years in pastoral work I saw many people leave their spouses for new ones, but on this occasion, the new relationship and the new marriages were born out of the ones that were there before (hover over this — Rev. 21:5).

Now – to the Gospel reading…

Day One – The New Creation Begins…

Look again at how John continues the Jesus story here with the words, “On the evening of that day, the first day of the week.”  Pause for a moment and think about it carefully. Doesn’t it sound more than a little bit like… “And evening and morning were the first day“? (Gen. 1:5b) I’m one of those people who believes that the Biblical authors are very intentional when choosing their words. There’s an important message to be heard here for those who have ears to hear.

This is the beginning of the first day of the new world that God is creating for the new humanity of whom Jesus is the first (see Col. 1:18). It’s a new world because of what has happened to Jesus. Now, and forever, there is and always will be a resurrected human being living in God’s creation who would sit down at God’s right hand (Jn. 20:17). None of this was a reality before “that day.” But other things will happen as the new Genesis unfolds on this first day of the new creation that would spread beyond what God had accomplished in Jesus. Here, in John’s telling, other human beings are about to be included in the new creation project in very new ways.

He breathed on them…

There is more that John wants to say about the new creation in Jesus. But first, look back at what happened with the first Adam.

Genesis 2:7 – Then the Lord God formed a man from the dust of the ground and breathed into his nostrils the breath of life, and the man became a living being.

Here in John’s Gospel, a second Adam has been brought up out of the ground, but it is out of him that the breath of life flows out to the rest of humanity. In the first creation, God’s crowning work happens on day six when He creates humanity, But here, the new humanity is brought forth on the first day and shares not only God’s life-giving Spirit with others, but he also extends his own vocation as the new humanity to them.

This new humanity, re-born and brought into a new life in Jesus, and filled with the Holy Spirit, were sent out by Jesus to continue what was begun in Him. They would say and do things that he had said and done. They would be His ever-expanding, ever-reaching image, voice, hands, feet, and yes — his very presence — in the new world that God was making through Him.

What God has done in Jesus’ resurrection is the best locus for understanding His future intentions for the rest of humanity, and all of creation (hover over this: Rom. 8:22-24). There wasn’t a completely different Jesus after the resurrection. He told his disciples to touch his hands and his feet and his side, and to see that it was he himself (Jn. 20:27 and Lk. 24:39). There were things about Jesus that were gone, to be sure (think “death”), but the real Jesus was really there in His fulness. He was standing before them showing them what God had in store for every one of them! He was the New Creation, and if any person joins Jesus, that person joins the new creation with all of its present implications and future hopes.

Tie this reality together with what Jesus tells the disciples to do after he breathes on them. He tells them to go into the whole world to begin dealing with sin, and helping people to process God’s forgiveness. All of those ideas are here in Paul’s words to the Corinthians. Think about it…

2 Cor 5:17-19 — 17 Therefore, if anyone is in Christ, he is a new creation; old things have passed away; behold, all things have become new. 18 Now all things are of God, who has reconciled us to Himself through Jesus Christ, and has given us the ministry of reconciliation, 19 that is, that God was in Christ reconciling the world to Himself, not imputing their trespasses to them, and has committed to us the word of reconciliation.

Jesus breathed new life into his disciples. He didn’t get rid of them for other better ones. Rather, he filled them with God’s Spirit, and sent them out to help people be rid of the things that keep us away from God (“the sins”). In this way, we are joining Jesus in the big thing that God is doing in the world. He is re-pairing, re-storing, re-connecting, re-moving, and re-constituting all things in Jesus. He will continue this work until every enemy of God is removed, and until all of creation is what God always wanted it to be. The resurrection of Jesus is just the beginning!

But wait — it gets better!

Rev. 21:1-5a — 1 Then I saw a new heaven and a new earth, for the first heaven and the first earth had passed away, and the sea was no more. 2 And I saw the holy city, new Jerusalem, coming down out of heaven from God, prepared as a bride adorned for her husband. 3 And I heard a loud voice from the throne saying, “Behold, the dwelling place of God is with man. He will dwell with them, and they will be his people, and God himself will be with them as their God. 4 He will wipe away every tear from their eyes, and death shall be no more, neither shall there be mourning, nor crying, nor pain anymore, for the former things have passed away.” 5 And he who was seated on the throne said, “Behold, I am making all things new.” (Emphasis added)

Lord Jesus – Risen Savior – First-born over all creation
My Lord and My God!
You are what we are meant to be
Breathe on me and fill me with your new life
Make all things new in me
Send me into the world with a renewed vocation
To bring reconciliation, the message of forgiveness, and new birth
Save and heal me, Re-store, Re-New, and Re-pair me
And bring me into your New-Creation work
Until all your enemies are under your feet
— Amen