If you think that saying “Thee, Thou, Thine” etc. is a more formal way to talk to God, you’re doing it wrong. 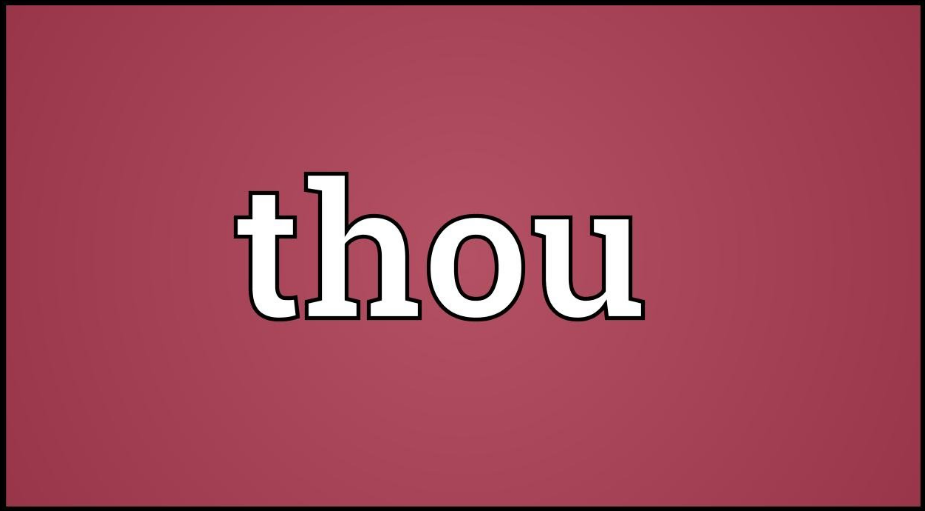 I grew up in a pretty non-religious family. We made fun of Christians quite a bit when I was growing up for lots of different reasons. One of the reasons was that some of them tended to “talk funny” when reading the Bible or praying. They seemed to have their own special insider language and words. Call it “holy talk.”

I can remember my dad remarking that he didn’t like reading the Bible because of all the “thees” and “thous” and “thys” in there. When I was in my teens, I remember asking a friend who offered a prayer at an event I attended why he used language like, “O God, we ask thee for thy blessing, for thou art a good God” (etc.) when talking to God? His answer: “That’s more formal English, and it demonstrates respect and honor for God to address him more formally.”

Sounds about right, eh? Only thing is… it’s not!

If you really want to address God with formality, based on the highest and most proper second-person pronouns in early English, then (uhem)… thou wilt need to say (drumroll please)… “You!”  Why? Because every bar-maid, blacksmith, house servant, and garden-variety peasant said “Thee, Thou, Thy” when speaking to common people in early English. They only used “You” when addressing someone of higher status, or in more formal circumstances, or in some cases while in dialogue with a member of the oposite sex as the case called for such formalities.

So — what happened? Why do we contemporary people actually believe that “thee – thou – thy” are the formal words, and “you – your – yours” are informal.

It was they who refused to use formal pronouns when addressing others (believing it to be wrong to esteem more highly or lowly any fellow person based on their rank or position). So, the Quakers went around calling everyone “thou” instead of “you” in order to make the point that they did not think anyone deserved rank distinctions. In order to distance themselves from this, er, “Quaker-quirk,” and not wanting to be considered rude, the cultural push-back for most people was to over-correct and simply use “you” for everyone. Who wants to come off like a Quaker (by the way, have you noticed that they still do this to this day)? If you didn’t want to be confused with a religious nut-job who took things a bit too seriously, you avoided using the lowly and common words “thou-thee-thy” at all costs.

The irony is that now most people mistakenly assume that the Quakers (and everyone else who does it) are just being really really religiously formal when they say “thou,” when in reality, they are using the most commonly-used early English second-person pronoun.

If you want to be formal (using early English) next time you read your Bible aloud or pray to God, be sure to say “You” when addressing God, and not “thou.” After all, as my friend said, God deserves the highest respect and honor we can give Him with our language.

For more on the use of You and Thou in early English, check out Terry Walker’s 2007 book “Thou and You in Early Modern English Dialogues”