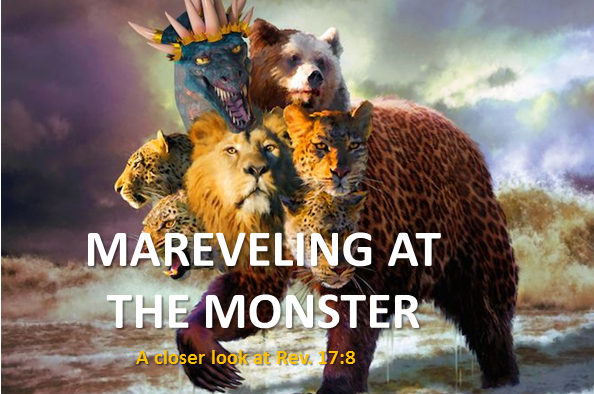 If I were to preach a sermon on Rev. 17:8, I’d title it “Marveling at the Monster.” Why? Because Revelation 17:8 is about a monster and the kind of people who marvel at it.

From my perspective (as I’ll demonstrate here), it’s also not about predestination or election (two words that never appear in the actual text). In fact, that idea is nowhere to be found in the text, and to find it there (I hope to convince you) is a theological interpolation (think: eisegesis which is done when we read theology into a text where it does not actually appear). The theme of predestination does not arise out of a clear reading of the text. I’ll let you be the judge of whether or not my conclusions are rooted in solid exegesis.

My interpretive framework (method and exegesis)

I’ll “move” through the text in three moves, and those moves (which I hope are faithful to the intended reading of the text) will connect back to my thesis that the text is about a monster and those who marvel at it (and, that it is not about predestination in any way).

Move One: Context (the larger point and trajectory of the text)

Revelation 17:8 is about a monster that will rise up out of the abyss (this bad guy has been in the story a while: see 6:7). And this monster, as we read, just keeps getting up after it is put down. Every generation sees the monster. We might say it this way:  “A previous generation heard of the monster (like a legend from the dark past), but it was put down and now it’s gone.”  “But no,” says John. “Not so fast!”  John wants us to know that every generation sees the monster because it must be overcome in every generation “from the time the world was founded” (a phrase used in this very text, which we’ll come back to).

But notice the language… “which once you saw, once was, now is not, yet will come up.” This is language for an inherent trait of the monster. This is what the monster does, and what it keeps doing over and over. It goes down (through the defeat and triumph over evil), and comes back up later only to be fought again, generation after generation from the time the world was created.  Each generation must beat the monster (and in time, it will finally go down and never come back up! — see the last 2 chapters of Revelation for what the world will be like then!). Thus, the overall theme here is the resurgence of evil in each generation, and how different groups of people respond to it (depending on their orientation toward God vs. the Monster).

Move Two: Those who marvel (who are they, and what does “marvel” mean?)

Some people in every generation (going all the way back to when the world was founded) marvel when they see the monster. “Here it is again! We thought it was gone, but no; it’s back!”  The people in this text have a response to the monster. In specific, they “thaumasthēsontai” (marvel / θαυμασθήσονται) when they see the beast! Are they afraid? Do they shrink from the monster when they see it? Nope. They admire it. They are glad it’s here. It is (from their perspective) something that helps them live in the world as they think they ought to live in it. They like the monster and they venerate it. It awes them! It gives them thrills and chills. That’s what thaumasthēsontai means. It means that they worship the monster! Here’s how G.K. Beale puts it:

Multitudes throughout the earth “will marvel” at the beast’s resurgence at the end of history. “Marvel” (θαυμάζω) has the idea of “admire” in a worshipful sense, as is apparent from 13:3ff., where “marveling after the beast” is developed in the following verses by words for “worship” of the beast (see on 13:3ff. for other views of the sense of the word). That worship is in mind here as well is evident from the description of those who “marvel.” [1]

Something else about these people though. We know exactly who they are because John tells us. They are “The inhabitants of the earth whose names have not been written in the book of life from the creation of the world.”

We know they are unbelieving because of the descriptor — “whose names have not been written in the book of life.”  Now, about that book of life, and when a person’s name gets in it…

Move Three: A Certain Book (and how and when you get your name in it)

These earth-dwellers who stand in awe of the monster do so because they are loyal to the monster, and as such their names have not been written in the book of life. There have been people like this ἀπὸ καταβολῆς κόσμου (since the creation of the world, or from the time the world was founded). In other words, since the very beginning, there have been people who stood in awe of the monster no matter how far back you go. They do this because they are oriented away from God. They do not have God’s eternal life in them because they love another — they love the monster.

In short, John is telling us that every generation since the beginning of the world has had “monster marvellers” and “beast worshippers,” and in every generation, the beast has to be put down, but then in the next generation he gets up again. And what happens then? Well, the people who marvel at the monster find their hero! They love the monster instead of God (their names are therefore not in God’s book). You get your name in God’s book when you swear your allegiance to God’s champion — Jesus. Those who align with God get their names in God’s “city register” — his “Loyal-to-the-King-and-his-kingdom Census log” — his “book of life.”

This is not about predesitination

My fellow ThinkTheology contributor, Pastor Able Baker has written on this text in support of a predestinarian interpretation of it. Here’s that post. I encourage you to read it and think about his interpretive case and the resultant conclusions as you compare it to the ones I’m making here.

As followers of Jesus working out of the same biblical text, we don’t always come to the same conclusions. From my perspective, in this case, that is because of a mistake in reading this text (more specifically, reading something into it that does not appear in the text at all). The mistake is made by (however subconsciously) importing a word into this text. That word is “before” (as in “whose names were written in the book of life before the foundation of the world”). It must be stated that this is not how the text reads, and leaving the word out clears the fog and misdirection. The theme here is how every generation has monster marvellers, and how this has always been so “since the foundation of the world.”

On this note, Christopher Fisher has written…

Secondly, “from the foundation of the world” could, and does, mean the timeframe between the creation of the world and the future time. This would be like saying “all those who have not grabbed an umbrella since we opened the storage locker will get wet”. The actions are not limited to taking place before the founding event in question. In fact, the natural reading is that the actions take place between the founding event and the future event.” [3]

Conclusion: What the text says (and doesn’t say)

This is a text inside of a book about Jesus (and his war with the powers that have been trying since the beginning of creation to take over the world). In the text I’m looking at here, there is a reference to a beast (I call him a monster) who keeps going down to the abyss (through defeat), but then keeps getting up again. In every generation, there are people awed by the monster. They love and worship it and make their lives work under the swing and sway of the monster’s influence. These people (who live on the earth and who are in awe of the monster) do so because they are not God-worshippers (e.g. their name is not in God’s book). They are not on God’s side.

The text is not a proof-text for a belief that goes something like this:

“Long ago before there was time and when there was only God, God pre-determined which individual people would be elected to be part of his eternal family. He did this unconditionally and it is a mystery which we do not understand. Right here in Rev. 17:8 it says that their names were put into a special book before the world was ever created. We must trust that God knows what he is doing by letting some in, and keeping others out.”

That is a theological reading of Revelation 17:8 that must ignore a historical-grammatical reading. The text does not dispense what the theology wants from it (namely, predestination).

Secondly, if this kind of predestination is what the Bible teaches (I do not think it does), then this text is off limits as a proof-text for it. That theology will have to look elsewhere for biblical support. There is none here to find.

Revelation as an entire book is not about how God sorted it all out before time began. It is about how, in Jesus, God has been working, is now working, and will ultimately win his victory over the subversive and rebellious powers (and those who follow them). Those whose names are not in God’s book are those who follow the monster. God does not want them to follow it. He has not selected them to follow it. They follow it because they are awed by and worship it instead of God.

If this was a sermon about marveling at the monster, I’d end it this way.

Don’t follow the monster in this generation (as others in previous generations have done — going all the way back to the beginning). Instead, follow Jesus — and in following him, have your name written down in God’s book of life.