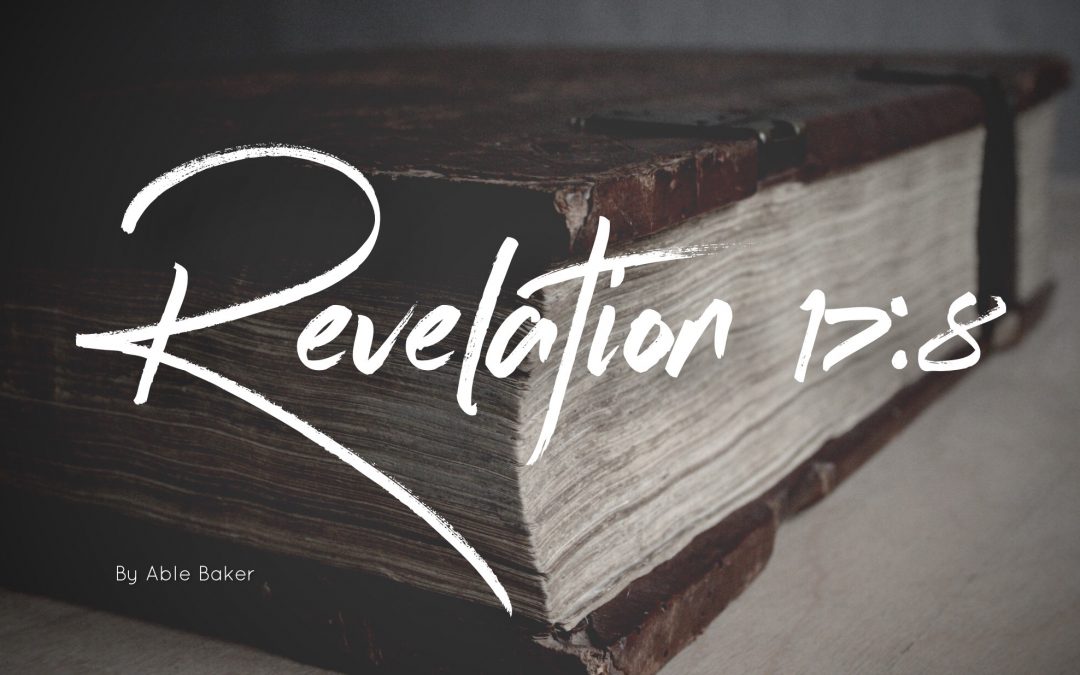 I was recently sent a text with the following question.

“In (Revelation) Chapter 17 verse 8 what does it mean ‘Whose names have not been written in the book of life from the creation of the world’?”

Great question! This is a super thorny passage because of the controversial doctrines involved here. This is a good opportunity for me to write a little bit about the doctrine of foreordination as well as predestination and election. These doctrines bring comfort to some and anger to others. Because many people avoid the book of Revelation passages like Revelation 17:8 go unnoticed. Which is a shame because the whole book points toward the glory of the sovereign God who is in control and has a plan for all things!

“even as he chose us in him before the foundation of the world, that we should be holy and blameless before him. In love he predestined us for adoption to himself as sons through Jesus Christ, according to the purpose of his will, to the praise of his glorious grace, with which he has blessed us in the Beloved. In him we have redemption through his blood, the forgiveness of our trespasses, according to the riches of his grace, which he lavished upon us, in all wisdom and insight making known to us the mystery of his will, according to his purpose, which he set forth in Christ as a plan for the fullness of time, to unite all things in him, things in heaven and things on earth. In him we have obtained an inheritance, having been predestined according to the purpose of him who works all things according to the counsel of his will, so that we who were the first to hope in Christ might be to the praise of his glory.”

God has established events and outcomes before they even happen. Christians for almost two thousand years have referred to this unique activity and ability of God as “foreordination”. All of God’s actions and plans concerning his provision and grace will happen without fail to those whom he wills just as he has planned. In the end his plan for his creation, including who will be saved from the coming judgment, will be the only plans that actually pan out (Eph 1:11) everything else will be like squelched meaningless noise.

Christians have used words like “Election” and “predestination” to refer to the topic of foreordination concerning the ultimate fate of people. Ephesians 1:4-12 gives us a glimpse into the mystery of foreordination, predestination and election. This is not a popular thought in every room of the household of faith. If you are anything like me it can be comforting at times to dream of some kind of control over things that we have no control over. We like to be the one behind the steering wheel so to speak. However, In the grand scheme of things concerning a believer’s ultimate redemption and right standing with God not one celebrating believer having overcome the final judgment will be able to say, “I did it!” nor will they be able to say “we (God and I) did it!”. Everyone saved and unsaved or all who overcome will only be able to say something like, “God has done this work of grace for the praise of His glory through the blood of the lamb”.
According to Ephesians 1:4-12 those whom God has chosen to adopt will find that the check didn’t bounce or in other words God’s word is sure and trustworthy. Even though God knows the beginning from the end his image bearers are still free to participate within the hedges of his knowledge, power and plan.

A person might ask, “How is freedom possible within the confines of foreordination, predestination and election?” No human can really answer the question for the same reason my guitar can never accuse me of stealing one of it’s songs. As instruments created for the hands of our creator many of the “how” questions are way beyond our pay grade. Perhaps a better question is “Who makes this freedom possible?”. We cannot not read Genesis’ creation account for example and find a satisfying answer to the question “How were the heavens and the earth made?” (other than God made them) but we can find an answer to the question “Who made the heavens and the earth?”. Our freedom comes with boundaries or limitations and we gain more understanding from questions with respect to our actual context as created beings rather than some imagined context outside of ourselves belonging only to the creator.

Everything is playing out toward the eventual marriage of heaven and earth in the new creation. All of creation is held within the confines of what God has predetermined concerning the adoption of his kingdom family, his redeemed sons and daughters.
This big unfolding redemption story is clearly seen in the drama John’s Revelation. The book of life metaphor is used several times in Revelation to express something like the list of kingdom citizens within the mind of God. Like Ephesians 1:4-12 the book of Revelation 17:7-18 shows God’s foreordination at work in those who are not elect or predestined to adoption…

“But the angel said to me, “Why do you marvel? I will tell you the mystery of the woman, and of the beast with seven heads and ten horns that carries her. The beast that you saw was, and is not, and is about to rise from the bottomless pit and go to destruction. And the dwellers on earth whose names have not been written in the book of life from the foundation of the world will marvel to see the beast, because it was and is not and is to come. This calls for a mind with wisdom: the seven heads are seven mountains on which the woman is seated; they are also seven kings, five of whom have fallen, one is, the other has not yet come, and when he does come he must remain only a little while. As for the beast that was and is not, it is an eighth but it belongs to the seven, and it goes to destruction. And the ten horns that you saw are ten kings who have not yet received royal power, but they are to receive authority as kings for one hour, together with the beast. These are of one mind, and they hand over their power and authority to the beast. They will make war on the Lamb, and the Lamb will conquer them, for he is Lord of lords and King of kings, and those with him are called and chosen and faithful.” And the angel said to me, “The waters that you saw, where the prostitute is seated, are peoples and multitudes and nations and languages. And the ten horns that you saw, they and the beast will hate the prostitute. They will make her desolate and naked, and devour her flesh and burn her up with fire, for God has put it into their hearts to carry out his purpose by being of one mind and handing over their royal power to the beast, until the words of God are fulfilled. And the woman that you saw is the great city that has dominion over the kings of the earth.”” (Revelation 17:7–18, ESV)

John is showing that those who were not written in the book of life (before the world was made) will respond to the beast in predictable fashion. No surprises here they (the unwritten) will easily and ultimately be won over by the miracles and power of the beast(s) (anti-Christian Rome and future anti-Christian powers). God in his divine power has foreordained that those not written in the book of life who persecute God’s faithful people will, like Judas Iscariot, find themselves to be simply tools in the real Masters hand.

So, back to the great question I was asked about Revelation 17:8 “…what does it mean ‘Whose names have not been written in the book of life from the creation of the world’?”. I interpret John to be saying that if one is not written in the book of life, which was written before the creation of the world, then one will not personally obtain the predestined inheritance mentioned above in the context of Ephesians 1:4-12.