Entitlement 101: the Wrong End of the Telescope 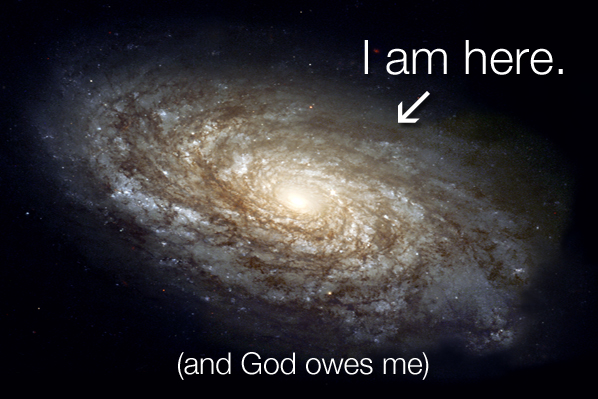 “This is a trustworthy saying, and everyone should accept it: ‘Christ Jesus came into the world to save sinners’—and I am the worst of them all. But God had mercy on me so that Christ Jesus could use me as a prime example of his great patience with even the worst sinners. Then others will realize that they, too, can believe in him and receive eternal life.” (1 Timothy 1:15-16)

As human beings, we have a remarkable tendency to make things all about us.

No, I’m not thinking of the “name it and claim it” crew — not this time. It doesn’t really matter what denominational background people come from; we all seem to have a built-in default setting that says, in effect:

“I gave my life to Jesus. Now, in return, He owes me a pretty decent life, unencumbered by pain, difficulty, or trial.”

It’s like looking through the wrong end of the periscope; we miss the big picture and becoming fixated on the small. And I can’t help but notice that many of those who have decided they no longer believe in God (the ones I know personally) often point to a crisis event where injustice, pain, or death (of someone close) invaded their lives.

As they ponder the hardship, their line of thinking goes something like this: Jesus (a) didn’t prevent it or (b) overturn it, so (c) why bother believing in Him, let alone following Him?

I understand the need to find someone to blame when things go sideways. When there seems to be no human culprit (and sometimes even when there is), Jesus can easily become the ultimate locus point of our anger.

On Vancouver Island, there is a cemetery where you can find a small gravestone that simply reads: “D.J. McAlpine 1991”. That year, Wendy & I buried our second child — Dallas Jorge McAlpine — due to an undiagnosed heart defect that snuffed out his life just before childbirth.

It was pouring rain on the day of the funeral. Wendy & I stood under an umbrella, watching with hollow hearts as the caretaker arrived for the burial. He hopped out of the hearse, reached back inside, and tucked a tiny little coffin under his arm as he cautiously navigated the rain-slick, uneven ground next to the open grave.

The previous few days had already been a numbing vortex of emotions, but somehow, the sight of the caretaker casually tucking the body of my son under his arm — like an item of little consequence — hit me like a ton of bricks. I was gutted, standing there in the rain beside my crying wife.

So, please understand — I’m not unaware of the depth of pain that causes some to question their faith in God.

Nor am I suggesting that I was a pillar of spiritual strength for surviving that experience with my faith intact. At times, it felt like my faith was a mere thread that I was clinging to against all odds.

But at the end of the day, I knew that if I had to choose between:

It was a no-brainer.

Today, however, I fear that many people are forgetting one of the basic tenets of our faith: that we are sinners in need of a Savior. Or at best, we have been Christians for so long that we have begun to take our salvation for granted.

Salvation, as the apostle Paul points out to his protege Timothy, is God’s mercy towards a bunch of people (us) who frankly didn’t deserve it. And yet many of us are prone to forget that we were once dead in our sins, and had no hope aside from the merciful intervention of God (Eph. 2:1-10).

I could point out that the earliest followers of Jesus — the disciples — didn’t have easy lives as a result of following Jesus. Eleven out of twelve died early, often violent deaths because of their faith, and the twelfth (John) wrote his epistles while in exile. The same has often been true for followers of Jesus throughout the centuries, until this present day (see The Voice of the Martyrs, for example).

But I think the greater concern is this:

When did salvation begin to mean so little?

How did we lose our sense of awe and wonder that Jesus loved us, gave Himself for us, and saved us from our sins and their [eternal] consequences?

If anyone is “owed” something, isn’t it Jesus?

Having made Jesus your all, you shall find all in Jesus.