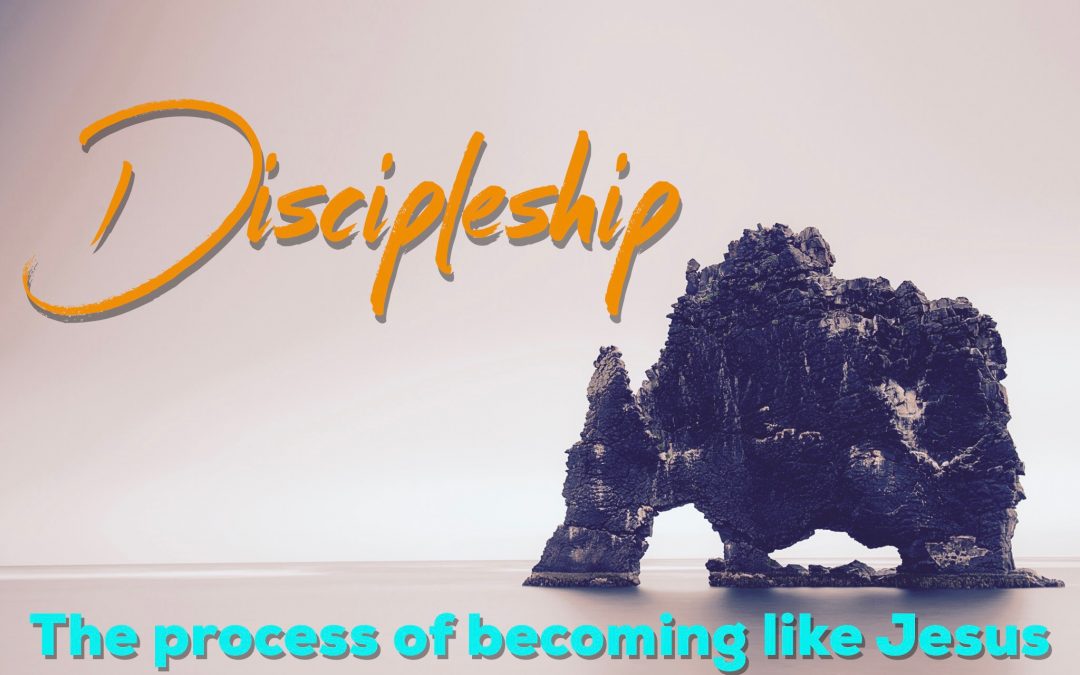 I’ve long been intrigued by the elusive subject of Christian discipleship. As a “child of the church,” having spent the entirety of my life in and around churchianity, I’m well versed in numerous definitions of what it means to be a disciple and yet, as I’ve read Scripture over and over and engaged the thinking of numerous authors, both pastors and theologians, I’m often left with more questions than answers. But because I believe that Jesus’ command to make disciples (Matt. 28:19-20) is one of the most important commands we have, I can’t set the subject aside and pretend it’ll eventually work itself out.

Before jumping to a working definition of discipleship, I think it may be helpful to identify some problems and challenges that tend to be unhelpful in our understanding of the subject:

Discipleship is not simply knowing stuff.

One of the negative consequences of the Enlightenment seems to be the assumption that many western Christians have made concerning the assumed transformative nature of information. We’ve basically spent hundreds of years assuming that if people just learn and memorize information, their lives will be transformed mysteriously into the image of Jesus.

Yet, as Bob Logan has noted numerous times, what we’ve actually done is educate people beyond their obedience. People have a ton of head knowledge but their lives are not being lived in a way that is shaped by that information. It’s as if we’ve downloaded entire systematic theologies into the brains of new Christians and then expected them to live out all 1,500 pages of it. The reality is that those new followers of Jesus have been over-saturated with doctrines and have yet to learn and practice the ways of the kingdom. Rather than educate people beyond their obedience, we need to educate people alongside their response. As followers of Jesus learn the ways of Jesus and become acquainted with his teachings, they, in turn, apply them to their lives. [Tweet “As followers of Jesus learn the ways of Jesus they apply them to their lives.”]

Discipleship is not a one time event.

While it’s true that people ontologically experience salvation immediatley upon the profession of their faith, people often experience salvation on a practical level as a process. Justification is certainly granted to broken sinners when their hearts turn from the ways of the world and, by God’s grace, cling to the work of Jesus on the cross, yet people seem to often come to terms with the beauty of God’s redemption slowly and in the context of numerous conversations and experiences.

I’ve seen this transition take place in our culture and think it’s largely just a chance of methodology and experience. The transition is noted in that fifty years ago, most conversion experiences were sudden and immediate. Folks would attend a Billy Graham revival and make a decision to follow Jesus and the experience was articulated in language emphasizing immediacy rather than process. Today’s cultural landscape tends to produce experiences of conversion that celebrate the process of discovery and thoughtfulness.

This became obvious a few years ago when I met a man who had been attending our church for a few months who finally came up to me and said, “You know I have been coming to church here mostly because my friends invited me and there was free coffee. But recently I think I might have become a Christian.” I replied, “What makes you think that you are a Christian now?,” to which he replied, “Well, I’ve come to understand that Jesus died for my sins on the cross and was raised from the dead and he sent his Spirit to help me live my life for God.” I responded, “Yep… I think it’s safe to say you are a Christian!”[Tweet “Yep… I think it’s safe to say you are a Christian!”]

Discipleship is not one size fits all.

One of the beautiful things about Jesus, I think, is how he took the time to meet people where they were at and engaged them in terms directly connected to where they were at in life. Whether engaging the woman at the well (John 4:1-42), a man with leprosy (Luke 5:12-16), or the woman caught in adultery (John 8:1-11), Jesus’ words and actions were unique and directly ministered, challenged, and healed those he was engaging.

That’s why any effective process or program related to discipleship has to have a lot of space for what is needed and what God is doing. While I love church resources that are “plug and play,” I absolutely despise the assumption that every city, every church, and every Christian is the same. Why? Because they aren’t!

While there are, as a I indicated above, many definitions for the word disciple and voluminous literature on the subject of discipleship, perhaps the Gospel of Matthew is a good place to start:

Then Jesus said to his disciples, “If any of you wants to be my follower, you must turn from your selfish ways, take up your cross, and follow me.” (Matt. 16:24 NLT)

In the first century, the word “disciple” (Gk. mathetes) described someone who was a “learner, pupil, or apprentice” and is used to describe someone who is “constantly associated” with someone and their teachings (cf. BDAG, 609). Jesus’ command (and, I think, invitation) to “follow me” is one of the most important ideas in the New Testament. It’s the place where a relationship with the Lord begins. We begin following him and learning his ways, his words, his teachings, his thoughts, and his mission. We observe what he says and what he does. We begin to engage his proclamations and demonstrations. We can’t really begin to apply Jesus’ teachings until we learn them! It leads to recognizing another important statement in Scripture: Jesus is Lord. As people begin to follow Jesus and learn his ways and encounter him, they begin to understand more and more that he is Lord.

If you put yourself in the sandals of the early disciples, think about the invitation to follow Jesus as an opportunity to walk with him and hear him teach on the kingdom of God and to see him invite people to experience eternal life. As you hear Jesus day after day, you begin to fall more and more in love with him and as Jesus continually asks that pesky question who do you say he is, your answer becomes more and more aware of his goodness, grace, and purposes.

So I think it’s safe to say that disciples of Jesus follow Jesus. But what else does it mean to be a disciple of Jesus? How might we understand following Jesus in a more fleshed out manner? Martin Manser writes that discipleship is:

“The process of becoming a committed follower of Jesus Christ, with all the spiritual discipline and benefits which this brings.” (Dictionary of Bible Themes)

Manser’s definition is helpful, I think, because of the word “becoming.” Avoiding the unbiblical and unhelpful suggestion that discipleship is crossing a finish line, this explanation envisions discipleship as a process of becoming. Another thoughtful definition comes from Chris Byrley:

“Discipleship is the process of devoting oneself to a teacher to learn from and become more like them. For the Christian, this refers to the process of learning the teachings of Jesus and following after his example in obedience through the power of the Holy Spirit. Discipleship not only involves the process of becoming a disciple but of making other disciples through teaching and evangelism.” (“Discipleship,” Lexham Theological Wordbook)

This brings me to one of the best definitions of a disciple. The legendary Bob Logan define’s disciple as the following:

“One who is intentionally following Jesus, becoming like Jesus, and living like Jesus in community with others on mission.” (The Missional Journey; also see Logan’s The Discipleship Difference)

Logan has fleshed out eight dimensions of discipleship, or activities associated with being a follower of Jesus as follows:

I had the honor of being part of a team that met with Bob Logan and helped put together these dimensions using Vineyard language, so I can vouch for the content and I’ve used them a lot and found them to be very effective (check them out here).

So disciples are people in the process of becoming more like Jesus as they learn his ways and apply his teachings to their lives in the power of the Holy Spirit. They are also involved in helping others also become more like Jesus.

Thinkers within the discipline of spiritual formation often emphasize knowing, being, and doing. They suggest that a healthy and holistic approach to Christian spirituality will acknowledge that this paradigm avoids ignoring the importance of our thinking, our identity, and our actions. 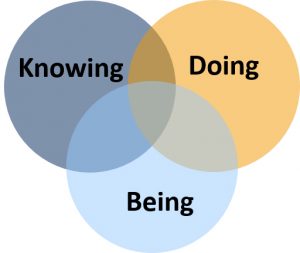 Disciples seek to know Jesus and Scripture. They are curious about the ways of the kingdom and seek to know more about it. Yet, as Ed Stetzer states, “we learn and know so we can be.” Being is related to our identity as children of God, united in the Spirit. And as ones with knowledge of God and aware of our identity as God’s ambassadors, we do the works of the kingdom. Knowing, being, and doing. The discipleship triad that emphasizes our heads, hearts, and hands. Stetzer again states, “Knowing who you are in Christ, then being who you are in Christ (by walking worthy), leads you do doing the work of God.”

So when I think of discipleship, I think of process. I think in terms of what the Holy Spirit is doing in the life of someone. I think of people becoming like Jesus and helping others become like Jesus. I think that the process is transforming all of who we are. It’s calling for us to know and to be and to do. Jesus invites us to structure our lives around the kingdom and points us to himself as the source of lasting joy, peace, and salvation… qualities we are called to share with the world around us.

In Deitrich Bonhoeffer’s fantastic The Cost of Discipleship, he states:

“When Christ calls a man, he bids him come and die.”

Discipleship is, quite frankly, the process of dying to ourselves so that we can experience life in Jesus. And it is, as Eugene Peterson notes, a long obedience in the same direction.