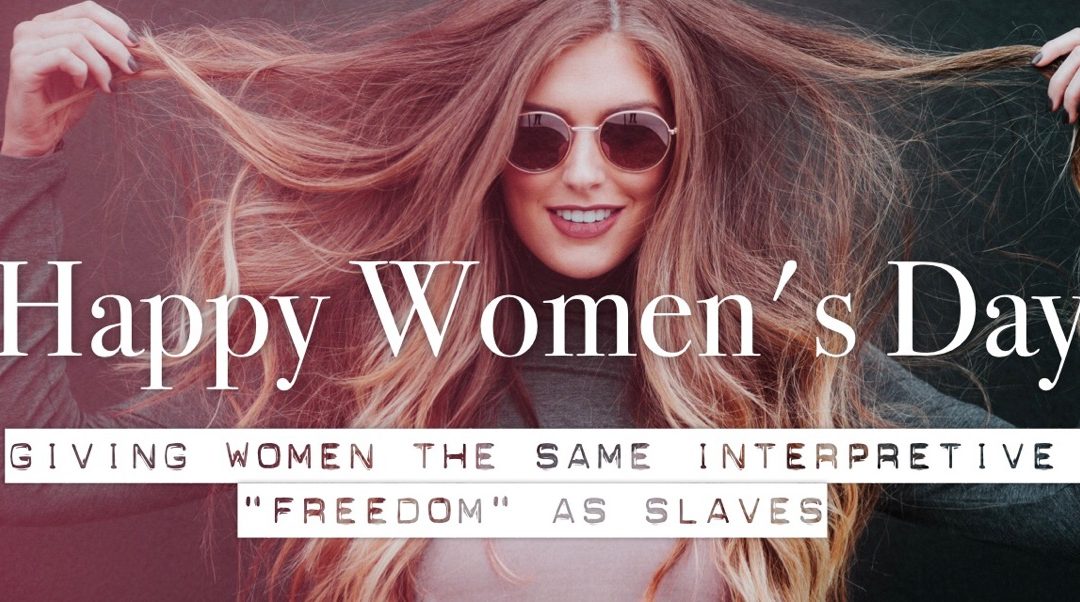 As I have continued studying issues related to women in ministry, gender, and hermeneutics (biblical interpretation), I have come to the conclusion that the Bible requires that Church does all that she can to both encourage and empower women to actively pursue leadership roles in accordance with their gifting. As the Holy Spirit gifts women to serve in leadership roles, the Church should remove any obstacles and barriers keeping them from or discouraging their active participation in local church leadership.

My commitment to encouraging women is based on what I encounter in Scripture. Many Complementarians, those who believe men are called to leadership and women are not, like to suggest that their perspective is the “biblical” perspective but I strongly beg to differ. I am, after all, an Egalitarian. As we exegete Scripture and do our best to understand the sociological and cultural backdrop of the Scriptures, I can’t help but reach the conclusion that Paul did not intend to prohibit women from leading in churches. Moreover, Jesus’ interaction with women throughout his public ministry, not to mention the fact that women were the first eyewitnesses to the Resurrection (who then taught the Apostles about it), seems to suggest that the perspective that women were second class humans, often treated as property, who were not trusted to have the ability to lead was being undermined by the coming of the Holy Spirit and the in-breaking of the Kingdom of God. This has been well articulated by Craig Keener (Paul, Women, & Wives), Don Williams (The Apostle Paul and Women in the Church), a host of scholars in Discovering Biblical Equality, Michael Bird’s Bourgeois Babes, Bossy Wives, and Bobby Haircuts, and more recently in Gary Hoag’s published doctoral dissertation, Wealth in Ancient Ephesus and the First Letter to Timothy, not to forget the hermeneutical observations of Scott McKnight’s The Blue Parakeet and William Webb’s Slaves, Women & Homosexuals. I mention these scholars for (1) full disclosure to the biblical-theological influences I find most convincing and (2) for those of you who are looking for resources.

There are numerous biblical and theological reasons why I believe that discouraging women from serving in leadership actually hurts people and robs the church from being fully resourced and effective. Gordon Fee has convincingly argued that the Church should give the Holy Spirit priority in gifting whomever the Spirit chooses to gift with whichever gifts the Spirit gives. Therefore a significant theological reason to encourage women to use their leadership gifts is the Spirit himself.

Secondly, if we take seriously the task of understanding Scripture in its original context, we need to consider Gary Hoag’s research on Xenophon of Ephesus’ influence on Paul’s instructions to Timothy in 1 Timothy 2. Paul did not intend for woman to “remain silent” for all time. His comments were related to a specific contextual situation and any attempt to impose Paul’s words today overlooks the actual intent of Paul. In fact, I believe to impose Paul’s words to the Ephesian women in the 1st century to women today does a disservice to Scripture and actually undermines the very authority of Scripture that is being allegedly championed.

Third, Jesus’ interaction with women undermined assumptions about the role and sociological structures where women were traditionally situated in first century Israel. As Ken Bailey has argued in Jesus Through Middle Easter Eyes, Jesus not only treated women as fully equal to their male contemporaries, he included them in his inner circle of disciples, trained them, and encouraged their non-traditional inclusion in ministry.

While each of these reasons could be (and have been) greatly expanded upon, and there are numerous other reasons, I think one of the most challenging interpretive issues facing those who believe that women should not lead in the church is related to slavery…

According to the Complementarian readings of Scripture, women shouldn’t lead men because women are called to submit to male leadership. Great emphasis is placed on the need for wives to submit to their husbands, as well as male leadership, because the New Testament “clearly” commands women to do so (cf. Eph. 5:22-24; Col. 3:18; 1 Peter 3:1-6). Of course, rarely do advocates of this perspective acknowledge Paul’s command that all Christians, regardless of gender, “submit to one another” (Eph. 5:21) or much discussion provided on the implication of Paul’s command to the Corinthians to “submit” to Stephanas and his household in 1 Corinthians 16:15-17. While Paul does not name everyone in Stephanas’ household, it seems reasonable that there were women in his family whom the church, both men and women, were to submit to.

What stands out in Complementarian literature is the emphasis on women submitting and men leading. They argue that what we read in the New Testament about women submitting to male leadership is a command that still stands. We are told that by God’s design, women aren’t called (or gifted) to senior leadership positions the church.

Yet women are not the only people that the Bible commands to “submit” or “obey.” The New Testament clearly indicates that slaves must also obey and respect their masters. The Apostle’s wrote:

“Slaves, obey your earthly masters with deep respect and fear. Serve them sincerely as you would serve Christ. Try to please them all the time, not just when they are watching you. As slaves of Christ, do the will of God with all your heart. Work with enthusiasm, as though you were working for the Lord rather than for people. Remember that the Lord will reward each one of us for the good we do, whether we are slaves or free.” (Eph. 6:5-8 NLT)

“Slaves, obey your earthly masters in everything you do. Try to please them all the time, not just when they are watching you. Serve them sincerely because of your reverent fear of the Lord. Work willingly at whatever you do, as though you were working for the Lord rather than for people.” (Col. 3:22-23 NLT)

“All slaves should show full respect for their masters so they will not bring shame on the name of God and his teaching.” (1 Tim. 6:1 NLT)

“Slaves must always obey their masters and do their best to please them. They must not talk back or steal, but must show themselves to be entirely trustworthy and good. Then they will make the teaching about God our Savior attractive in every way.” (Titus 2:9-10 NLT)

“You who are slaves must accept the authority of your masters with all respect. Do what they tell you– not only if they are kind and reasonable, but even if they are cruel.” (1 Peter 2:18 NLT)

Webb, in a JETS article, also noted the “not so pretty” treatment of people/slaves by pointing out the following:

In today’s modern world, everyone agrees that slavery is evil and that slaves should be freed and that it’s perfectly justified for slaves to do whatever they can to get out of their situation. In fact, I’ve asked numerous Complementarians if it would be “biblical” to tell slaves that they can “run away” from their masters and every single one of them has said, “Yes!” So the question I have is why do we allow slavery to get a free pass and women aren’t?

It seems that it would be better to be a modern-day slave than a woman.

Don’t get me wrong. I’m not suggesting that we should stop considering slavery evil. I’m also well aware of the fact that there were different types of slaves throughout the Bible. But I’m confused as to why some overlook the “clear” and “explicit” statements found within the New Testament concerning issues related to slavery but are very committed to maintaining the sociological structures of the ancient world when it comes to women.

Quite frankly, it’s an inconsistent hermeneutic. Many of us would tell someone trapped in slavery that they should pursue freedom and get out of their situation, despite the “clear” biblical teachings of slaves obeying their masters, yet would inform women that they must continue to submit to male leadership and aren’t allowed to lead in a role over men. And sadly, many Complementarians aren’t willing to even acknowledge this problematic issue (I’m grateful to a few good friends whom happen to be “soft” Complementarians who acknowledge that this is an issue to wrestle with).

The simple hermeneutical issue at hand is that when we read Scripture, it appears that there is a trajectory that goes from viewing women as property or second class citizens to fully empowered by the Spirit ambassadors of the kingdom. This was articulated well in Webb’s groundbreaking Slaves, Women & Homosexuals Grudem’s criticism of Webb( has been engaged and, I think, found to be less than convincing by Webb here and by Scot McKnight here). Rich Nathan, pastor of the Columbus Vineyard, also makes a strong case for an eschatological reading of Scripture in his paper, “Women in Leadership: How to Decide what the Bible Teaches.”

As I’ve indicated, I am committed to encouraging and empowering gifted and called women to pursue church leadership because that’s what I believe the Bible teaches. So I completely reject the common tactic from Complementarians who suggest that folks like myself are simply “ignoring” Scripture. A few years ago a friend of mine told me that the only way that someone could support women as pastors was if they decided the Bible was wrong on the matter. 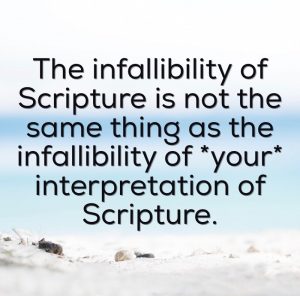 The initial problem with this sleight of hand is that it simply isn’t true, not to mention that it’s often begging the question, circular reasoning, and absolutely a red herring. All of the Egalitarian scholars I have mentioned above, those who believe that women and men should be encouraged to lead based off of their gifting rather than their gender, appeal to the Bible as the source of authority.

Which is why it’s very important to understand that there is a huge, huge, huge difference between the authority of the Bible and the authority of someone’s interpretation of the Bible. Well meaning people confuse the infallibility of Scripture with the infallibility of their interpretation of Scripture all of the time. But when I hear this, I can’t help but think, “Ummmmm, you aren’t the Bible. You are interpreting the the Bible from a theological tradition and reading it through a lens, just like me and just like everyone else.”

For these reasons, and a host of others, I’m both committed to encouraging and empowering women. And so on this 2017 International Women’s Day, I am very thankful for the many women whom God has placed in my life who bless me. And I will continue to do my part to encourage women and to serve with women and to value the women whom God is working through…