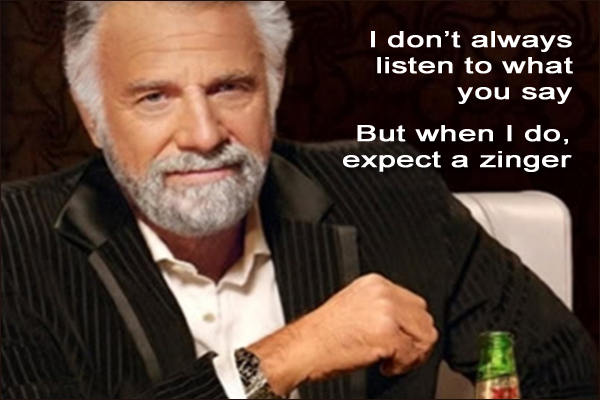 “I’ve decided to stay out of those discussions, until I can be sure that we can have a non-hysterical conversation about it.”

The moment my friend casually uttered that phrase, I was immediately struck by its simple and profound wisdom.

It’s become increasingly difficult to have a good, old-fashioned conversation these days. Much more so, a debate. I recall with fondness all the late-night theological discussions during my Bible college days. In a non-denominational school, my friends represented a wide variety of viewpoints, and we enjoyed (a) our spirited discussions, and (b) the ability to go out for coffee the next day, because friendship/fellowship was not mandated on 100% agreement.

Discussions about politics and religion have always been meme-worthy in their ability to devolve into polarized shout-down matches. That was true when I was a kid, and it appears to be — if anything — even more vociferous today, thanks to anti-social media platforms that reduce dialogue to soundbytes or less.

“Theology by zinger” is a fairly predictable byproduct in a culture that prizes the ability to cram complex ideas into a bumper sticker or a tweet.

I could go on to suggest that the casualties of the zinger approach would include things like: nuance, context, and understanding. You can’t even legitimately arrive at the old adage “agree to disagree” if all conversations degenerate into zinger-ology.

But I think something far more basic has been lost, and if there’s any value in making a New Year’s Resolution for 2017, it might be this:

We need a revolution of listening.

The art of conversation, and respectful “help me understand” dialogue. Where the end goal is not to gather ammunition for the next zinger, but to understand. “Agree to disagree” will still be the result at times, but relationships will be greatly improved.

And “non-hysterical conversations” will look (and sound, and feel) a lot more Christ-like.

“But in your hearts revere Christ as Lord. Always be prepared to give an answer to everyone who asks you to give the reason for the hope that you have. But do this with gentleness and respect, keeping a clear conscience.” (1 Peter 3:15-16)