Jesus Blesses Children Who His Disciples Just Tried to Run Off! (Follow Me: Part 39) 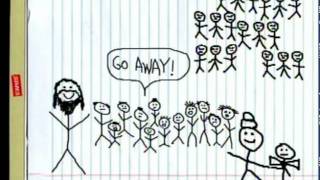 Mark 10:13-16  Jesus blesses the children whom His disciples tried to run off Young children were brought to Jesus, perhaps by their parents, that He might bless them. But the disciples rebuked them (v.13). Lane sees a parallel here with their lack of perception when they tried to stop an exorcist (who was not known to them) who was casting out demons in Jesus’ name (back in Mark 9:38-42). Jesus is pretty stern with them – “do not hinder them.” In fact he is indignant with them (v. 14)! Why? 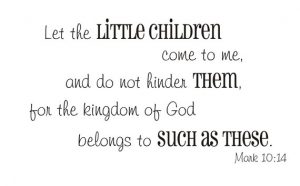 Because they treated them as if they were unimportant, insignificant. On the contrary, they are created in the image of God. [I could go off into a contemporary illustration of this pointing out that gay persons, muslims, democrats, sinners, and frustrated, rioting, inner-city poor are no less image bearers of the Almighty than any others of us – but I don’t want to get too far off track.]

“The Kingdom of God belongs to children, and to others like them who are of no apparent importance, because God has willed to give it to them.” – WillIiam L. Lane

Jesus continues His rebuke of the disciples with a strong and shocking statement regarding conditions for entrance into the kingdom. Verse 15 calls for ‘a fresh realization that we are utterly helpless in our relationship to the kingdom’ (Lane, NICNT, p. 360). Achievement or merit will never do it! The kingdom is something that God gives and man receives. We can learn something from children here. As adults we are less open to accepting a free gift with no strings attached. In fact, we may be suspicious that any such kind of gift can even exist in this world. We may not want a hand out. We can earn our own way! Especially here in the U.S. where the independent spirit, the entrepreneur, hard work and “I can do it on my own; I don’t need nobody’s help” are among our most highly esteemed values. 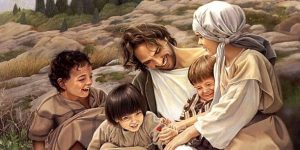 So Jesus takes them into his arms, expressing loving care for them – they are significant; they are important! He blesses them with prayer and laying on of hands (v. 16). So, yeah, I guess the disciples are feeling pretty stupid at this point, huh? True discipleship means embracing and obeying the intention of God. In this case, embracing the imago dei in each human person. More specifically, illustrated here with little children, perhaps among the most helpless and seemingly insignificant of people (but this is a worldly view). But not so in God’s Kingdom!