God is not like a Father (a Father’s Day Reflection) 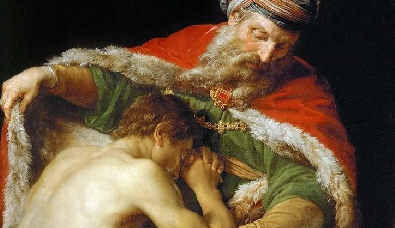 It’s almost Father’s Day here in the U.S., so I want to use the occasion to remind everyone that God is not like a Father.

This holiday, along with Mother’s day, is both a wonderful and a difficult time for parents and children alike. It is especially hard for those who had difficulty with their parents, or parents who feel estranged from their children. It’s even more difficult for children and parents in these circumstances who go to church on these holidays, many of which will be sharing messages about the importance of motherhood, or the blessings of being children of our heavenly Father.

For more people than we can count, likening God to a father brings up painful memories of childhood (or adulthood), and varying levels of pain, regret, and confusion as they try to set their image of “father” next to their understanding of God.

I’ve been enjoying a great book by the late Kenneth E. Bailey for the past couple of days called Jacob and the Prodigal. It is a study of the parable of the Prodigal Son in Luke 15:11-32. It is a powerful study of God’s gracious love toward his unfaithful sons. This morning I read this refreshing and, I’ll say, jolting perspective by Bailey on the “God is like a father” idea. He writes:

…the Bible neither compares nor likens God to a human father. In Hosea 11:9 God speaks:

For I am God and not a human being, the Holy One in your midst, and I will not come in wrath. (author’s translation)

Scripture makes clear that God is not like a father but rather like this father, namely the father set forth in Hosea 11 and Luke 15. (p. 144)

Stop. Go back. Read that again out loud.

All of this reflection sent my mind back in time to the months following the adoption of our son, Victor. He was three years old when we brought him home. Like most other fathers, I began trying out all of the “dad” stuff that I learned from my dad, and from other men whom I respected. Some of it was good, and some of it was not.

On one particular occasion after Victor had done something disobedient, I decided to try out my “scary-ROAR-your-displeasure-and-correction” voice on Victor. He had the appropriate reaction. Wide-eyed fear and paralysis. I felt self-justified as I left the room and walked around the corner in a huff, leaving him sitting alone on the couch. As I turned the corner out of the living room and down the hall, I passed by a big mirror that covered most of the wall and looked at my face — brow still furrowed, lips still turned down. I stopped and kept my face just as it was for a moment, and then I heard a voice in my heart say…

In that moment I was shocked and humiliated at my failure to teach my son what God is really like. I had to turn around, go back to him sitting on the couch (looking at me and wondering what would happen next), and gently kneel down next to him to apologize for the way I treated him. He deserved correction and discipline, but I did not treat him right in the way I carried it out.

Over the past eleven years, my son and I have learned to apologize to one another and make things right on the basis of how a son should respect and respond to his parents, and how a parent should respect and respond to his children — even when they do wrong. I admit that I do not have it perfect (not even close). But this I do know… God is not like a Father. No. He is like this father in the parable of the prodigal son.

Jesus did not merely teach his disciples to pray “Our Father.” He defined his terms. Surely, no image of Father as a title for God should be allowed to inform the mind of any disciple of Jesus other than the one he created in the parable under discussion. (p. 145)

So true. Jesus doesn’t simply use the word “father” and then leave his hearers to use their own broken image of father to set next to their understanding of God. He tells them — and he tells us what our Father in heaven is really like.

“The yearning of thy heart and thy compassion
are withheld from me.
For thou art our Father,
though Abraham does not know us
and Israel does not acknowledge us;
thou, O LORD, art our Father,
our Redeemer from of old is thy name.” (Is 63:15–16)

Out of Egypt I called my son.…
It was I who taught Ephraim to walk,
I took them up in my arms; …
I led them with cords of compassion,
with the bands of love,
and I became to them as one
who eases the yoke on their jaws,
and I bent down to them and fed them.…
My heart recoils within me,
my compassion grows warm and tender. (Hos 11:1–9)