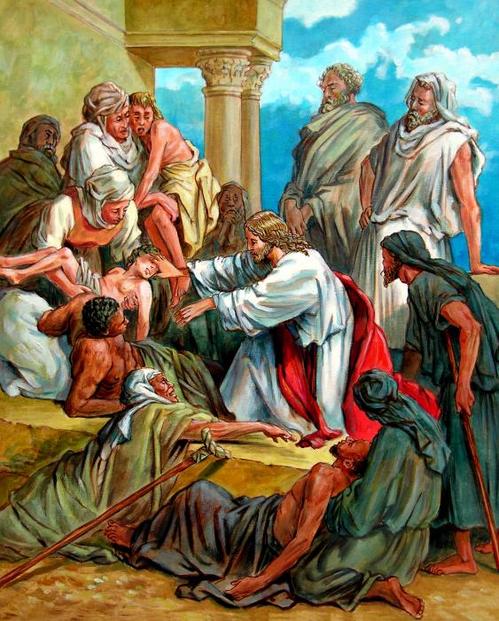 The failure of the disciples to have faith for God’s provision and their hard heart-ed failure to discern the divinity of Jesus, lands them in Gennesaret, on the northwest shore of the sea of Galilee (v. 53). Jesus’ popularity in Galilee has not waned. As soon as they land the people recognize Him (v. 54), 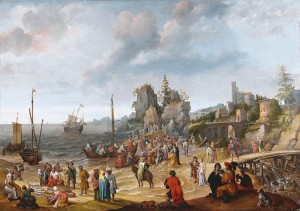 and the scene Mark paints is almost frantic: they “ran about the whole region” bringing sick people “to wherever they heard he was”  (v. 55). Jesus seems fond of ministering in small towns to regular folk (“in villages, cities, or the countryside”). The healing crusade plays out in the marketplace. The people seem desperate: imploring “him that they might touch even the fringe of his garment”. The results are definitive: “as many as touched him were made well” (v. 56).

In recent weeks we’ve seen Jesus rejected in His hometown, the disciples sent out to do their own miracles, learned that following Jesus is just plain hard, and seen the 12 Knuckleheads fail at faith more than once. Now we see a return to the fast-paced action of Mark’s gospel with Jesus’ mass healings and huge popularity! The lack of any mention of accompanying teaching may be significant here. The people may not be “prepared for Jesus’ proclamation of the word” (Lane, NICNT, p. 241).

Jesus is a man of the common people. He wants to be near them, to touch them. He cares about you and me, even when our lives become boring and mundane. He cares about our sick kids, our bad knee that has been getting progressively worse over the past twenty years, and our big fears, like Cancer! How desperate are you? Am I frantic enough about my circumstances to actually, finally have faith that He not only can, but actually will, act in my favor? Are you crazy enough about Jesus to actually push through the crowded-ness of your life to get time with the Master, face-to-face? Am I a genuine enough disciple to actually proclaim the good news to someone who desperately needs to hear our message of hope, or will I simply remain the 13th knucklehead? As His follower, are you willing to imitate the great Rabbi and ask those seven dreaded words: “Can I pray for you right now?”

Isn’t it about time we actually start following Jesus. Pick up your pole and start fishing!