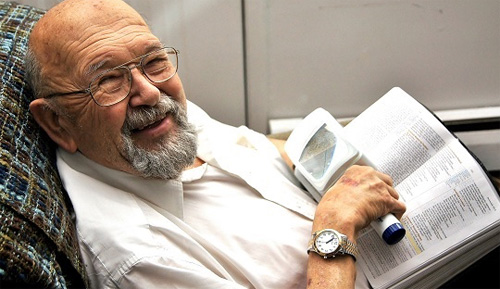 COMMERCE CITY, CO – After years of debating whether or not the gifts of the Holy Spirit were of any relevance to the contemporary Church, pastor Zane Trimble of Mountain Christian Center has provided what he believes is incontrovertible evidence that they are no longer necessary.

“We feel that the living God himself has shown us that He no longer works that way,” Trimble reportedly told his congregation. “We have always taught that when that which is perfect has come – which clearly refers to the completed canon of the Bible – then the partial would be done away.”

According to Trimble and several pastoral staff members, God’s word did not return void on this important promise. The proof apparently came at the end of the second service two Sundays ago when, after a particularly excellent exposition of a Bible passage, a man came forward asking the pastoral team if anyone had a completed copy of the Biblical canon that he could see for himself. After handling several English translations (including the church’s NIV Pew Bible, the Pastor’s calf-skin covered preaching Bible, and a cheap imitation leather copy left behind by a kid from the youth group), the man began weeping and reportedly exclaimed – “It’s true! It’s really true! A completed Bible. I’m ready to believe.”

An outreach event is planned for the week before Easter Sunday when the church will be placing the three Bibles on a cart and pushing them through a crowded shopping mall with hopes that God’s completed word will bring in even more souls. – ChristianSatirePost